Jaguars take steps back in 31-7 thumping by Seahawks 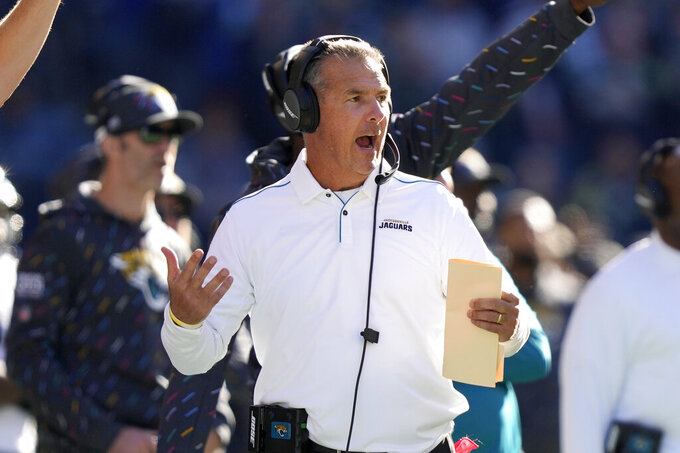 Jacksonville Jaguars head coach Urban Meyer reacts to a play during the first half of an NFL football game against the Seattle Seahawks, Sunday, Oct. 31, 2021, in Seattle. (AP Photo/Stephen Brashear)

SEATTLE (AP) — The little bit of momentum and the jolt of excitement that followed the Jacksonville Jaguars home from London quickly disappeared on Sunday. Some of the same mistakes from earlier in the season bubbled up yet again.

There wasn’t much good for Jacksonville to take away from its 31-7 loss to the Seattle Seahawks. Two weeks after snapping their 20-game losing streak and beating Miami, the Jaguars (1-6) came less than two minutes away from being shut out for only the fourth time in franchise history in a regular-season game.

It took a late drive and Trevor Lawrence hitting Jamal Agnew on a fourth-down TD pass with 1:49 remaining to finally get the Jaguars on the board. It would have been the first time in Lawrence’s college or pro career being shut out if not for the late score. Meyer was shut out only once in his long college career, losing 31-0 to Clemson in the 2016 Fiesta Bowl.

The Jaguars were at least able to avoid that fate. But it seemed there was very little to build on.

“We played like crap today,” Lawrence said. “That’s gonna happen every now and then. But we can’t let this happen again for sure.”

It didn’t help Jacksonville that starting running back James Robinson went down with a bruised heel in the first half and did not return.

Robinson appeared to hurt his heel — it was originally announced as an ankle injury — after catching a 17-yard screen pass in the final seconds of the first quarter. He was listed as questionable and seemed to be testing the foot on the sideline during the second quarter. He never returned.

Three plays after Robinson was injured, Lawrence threw his ninth interception of the season on a miscommunication with Tavon Austin. Seattle capitalized on the turnover and Geno Smith’s 16-yard touchdown pass gave the Seahawks a 14-0 lead. That put the Jaguars in the kind of deficit they’re not currently equipped to overcome.

Lawrence finished 32 of 53 for 238 yards, but more than half of those yards came in the fourth quarter with Seattle holding a comfortable lead.

“We took a step back I think in making the plays that we need to make as far as good teams do that and good players do that,” Lawrence said. “It all starts with me. I think that’s the main point where we start, and I think just moving forward, just trying to keep it simple to where we just play and let our guys be the players that they are.”

While most of the focus will be on the Jaguars' offense, the problems weren’t isolated.

Jacksonville’s defense allowed Seattle to score on three of its four first-half possessions. The Jaguars also had defensive communication issues that led to a penalty for having 12 players on the field, and a timeout being called to avoid the same penalty again.

“In this league that should never happen,” Jaguars linebacker Myles Jack said. “There’s no excuse, we have to have better communication coming off the field.”

Meyer also regretted some of his decision making at the end of the game. After Jacksonville’s touchdown, Meyer opted to kick the extra point, keeping it a three-possession game. But the Jaguars then decided to try an onside kick, which Seattle’s Travis Homer fielded cleanly and returned 44 yards for a touchdown.

Meyer said there was talk of hoping to get the ball back to work on some things offensively. Watching the Seahawks run the onside kick back for a score seemed a fitting conclusion to Jacksonville's day.

“I should have kicked it deep,” Meyer said. “We kind of had that discussion on the sidelines. They wanted to try it and work on some things, get another possession.”