Jenkins: Sorry for offending people, happy to be a Saint 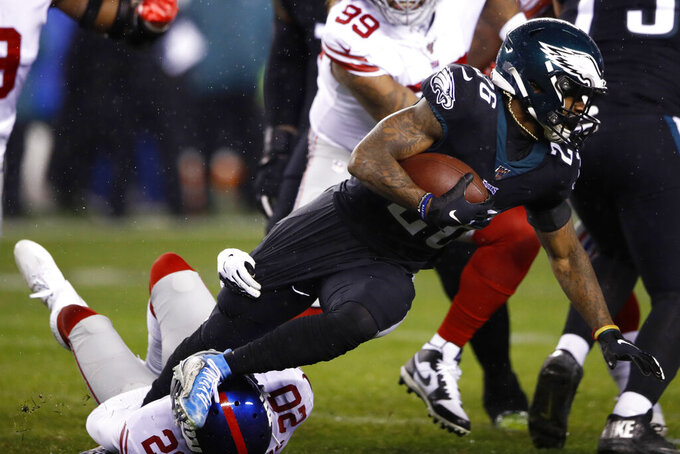 METAIRIE, La. (AP) — Former Giants cornerback Janoris Jenkins asserted that he was in fact sorry about his use of an offensive term in an exchange with a fan on social media.

Jenkins also made it clear he was not upset about his exile from New York, particularly after it landed him with playoff-bound New Orleans.

Giants coach Pat Shurmer said last week that Jenkins' “refusal to acknowledge the inappropriate and offensive language” when he used the word “retard” in a social media exchange influenced the the club's decision to waive the cornerback. But Jenkins said Wednesday that the Giants “twisted” his position on the matter.

“I'm sorry to whoever I offended. You know, the way I was raised, we got different cultures and different terms that you use,” Jenkins said. “I apologize if I offended anybody or anybody with those disabilities. I didn't mean it that way.”

Gone from a 3-11 Giants team, Jenkins is now aiming to fit in with an 11-3 Saints squad that has already won the NFC South for a third straight season and is in the running for one of the top two seeds in the NFC playoffs.

“You can already tell it's a organization that you'd like to play for. Winning, everybody got the same mindset, winning a championship. And I'm just looking forward to it,” Jenkins said after his first practice. “I'm blessed. I got a opportunity to be on a winning team.”

Jenkins is one of two new defensive backs to join the Saints this week. New Orleans also added depth at safety with the signing Wednesday of free agent safety D.J. Swearinger. Starting strong safety Vonn Bell, who missed Monday night's game against Indianapolis with a knee injury, has yet to practice this week.

When the Giants waived Jenkins on Friday, the club did so with a waived-injured designation. Jenkins has said that he hurt his ankle in a loss to Philadelphia on Dec. 9, but that he is fine now. He was not listed on New Orleans' injury report on Wednesday.

Jenkins, who goes by the nickname “Jackrabbit,” said he isn't bitter about the way the Giants cut him loose just.

“I look at it as, ‘business is business.’ You know, you can’t control what they do in the front office,” Jenkins said. "You just go in each and every day and go to work. And anybody around that facility can tell you that Jackrabbit always showed up on time, never late and did what he had to do.

It remains unclear how the Saints will deploy Jenkins, who has four interceptions this season, as many as the Saints' leader in that department, safety Marcus Williams.

“We'll see," Saints coach Sean Payton said, adding that his staff believes Jenkins is capable of playing multiple roles in the defensive backfield. "He gives us versatility, and I think that's important here down the stretch.”

The Saints' current starting cornerbacks are Marshon Lattimore and Eli Apple. Jenkins and Apple were teammates in New York before the Giants traded Apple to New Orleans during last season.

Apple said the Saints consulted him before claiming Jenkins off of waivers earlier this week. Apple described Jenkins as “somebody with great instincts, smart and savvy as well, and great ball skills.”

Apple said he was not worried about whether his role as a starter could be threatened by Jenkins' arrival, adding that a team trying to win a championship needs to capitalize on opportunities to add players of Jenkins ability to its secondary.

“Around this time you’ve gotta have good depth, especially on the back end,” Apple said. “We’ve had some injuries. So it makes sense.”

Jenkins said being teammates again with Apple is “fun.”

“We always had a bond,” Jenkins said. "Now I’m here where he’s at, so he can show me and kind of tell me the playbook and I’ll learn it and just move forward.

Jenkins added that he's open to playing various roles in a defense that often fields more than four defensive backs in passing situations.

“I can thrive anywhere,” Jenkins said. “I’m just looking to be on the field and have fun, man.

“It feels awesome to come in knowing you got a fresh start,” Jenkins added. “Just come in and play ball, do what I’ve always been doing, do it to the best of my ability.”

Notes: Left guard Andrus Peat, who is recovering from a forearm fracture, returned to practice on a limited basis. Linebacker Kiko Alonzo, who has missed two games with a quadriceps injury, also was limited in practice. In addition to Bell, right guard Larry Warford (left knee) and C.J. Gardner-Johnson (concussion) did not practice. Both were injured Monday night in a victory over Indianapolis.