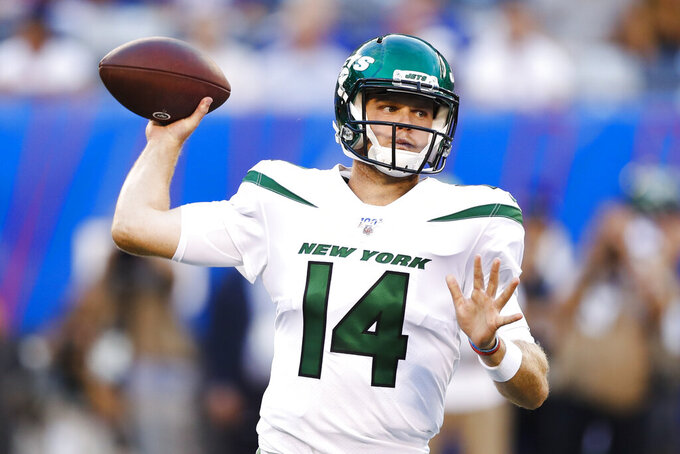 EAST RUTHERFORD, N.J. (AP) — Sam Darnold has talked all summer about how much more comfortable and confident he feels entering his second NFL season.

It certainly showed in the New York Jets' preseason opener.

Darnold needed only seven plays in just over three minutes to dazzle in his season debut, finishing 4 of 5 for 68 yards and a touchdown with a perfect 158.3 quarterback rating in a 31-22 loss to the Giants on Thursday night.

"It was fun out there for that first drive," he said after the game. "And hopefully it gave Jets fans a little taste of what the season is going to be like."

Darnold was efficient and effective in his only series, spreading the ball around and quickly marching Adam Gase's offense down the field against the Giants' starting defense.

"I loved the tempo they played with," Gase said. "Sam did a good job extending plays on third down. Guys were in the right spot, communication was good. I thought the pocket looked good.

"It was fun calling it."

Gase and the Jets are hoping for plenty more performances just like this — over a four-quarter span, of course.

This was a fantastic first step, though. Well, after that nearly disastrous first throw from Darnold.

On second-and-6 from the Jets 29, Darnold tossed a pass toward Quincy Enunwa near the sideline, trying to squeeze the ball in to his receiver. Giants safety Jabril Peppers got there, though, and nearly intercepted it.

"That was really dangerous and first pass under Coach Gase was almost a pick," Darnold said before smiling. "Almost a pick six — again."

He was referring to his first "official" NFL pass in Week 1 of the regular season last year, when Detroit's Quandre Diggs returned it 37 yards for a touchdown. Darnold bounced back in that one as the Jets routed the Lions 48-17.

"So really trying to limit those," Darnold said, "but it was a close call (Thursday night) and I thought we finished the drive well."

On the next play, he connected with Chris Herndon for 32 yards and a first down. Next came a short pass to Jamison Crowder, who took it 28 yards to the Giants 11 in his first catch for the Jets after signing as a free agent in March.

Ty Montgomery, who also joined the Jets in March, showed off his versatility with a 5-yard catch and a 3-yard run on consecutive plays to get the Jets down to the 3.

Then, out of the shotgun, Darnold took the snap, rolled to his right and found Crowder at the front of the end zone for a touchdown.

Just like that, the night was over for Darnold and the first-team offense. And that was even with star running back Le'Veon Bell getting the night off.

"I have to look at it, but when you score, in your mind you kind of feel like everything is perfect," Gase said. "But I'm sure there's going to be about 10 to 12 things that we'll pick apart."

Gase has raved about Darnold's instincts on the field and how he has never worked with a quarterback at this stage of his development. The coach is excited about the possibilities, and Darnold did nothing to temper Gase's expectations.

It wasn't just the plays, either. It was Darnold's California cool that impressed Gase.

"His sideline demeanor and his on-the-field demeanor, they're awesome," Gase said of the former USC star. "He is calm. I thought just watching him on the field, he'd relay the call in, get the guys lined up, he was just flatline. And then he played fast, so that was just getting the calls in as fast as possible so he can go to work."

Darnold's velocity on his passes is up a bit from last year as a rookie, something he attributes to strengthening his hips and gaining more overall confidence.

The biggest focus this season will be Darnold's development, and the rapport he and Gase have as the 22-year-old signal caller takes the next step in his progression.

For one night, and one series, everything worked to perfection.

"It was huge," Darnold said. "I think we just continue to make strides. These preseason games, I think that's what that's for, is just communication, continuing to be on the same page and it didn't really change from practice very much. The only thing that changed was that I was able to get hit. I think just my communication with the O-line and the receivers and the running backs, the tight ends, I thought was pretty good.

"We can clean things up, but I thought for the most part, we did a pretty good job."