Jets have more talent, but Wilson remains the key to success 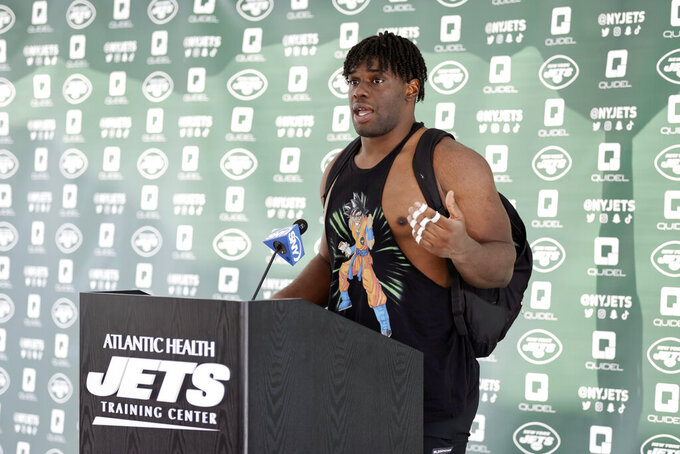 STRENGTHS: The defensive line was solid last season, but is further bolstered by the return of Carl Lawson from a ruptured Achilles tendon that sidelined him all last year, to go with free-agent additions Martin and Thomas, and draft picks Johnson and fourth-rounder Micheal Clemons. Along with budding stars Quinnen Williams and John Franklin-Myers, New York should put pressure on quarterbacks this season. An improved secondary should help buy the big guys up front some time. The Jets have quite a few playmakers on offense, too, and that's something they haven't been able to say in a while. A potential 1-2 punch of Hall and Michael Carter gives New York a versatile backfield to complement an upgraded tight end group with Uzomah and Conklin, with Wilson teaming with Corey Davis and Elijah Moore to stretch the field at wide receiver.

WEAKNESSES: The depth at linebacker is a question after C.J. Mosley, Quincy Williams and Alexander, a veteran who was signed early in training camp. Second-year linebackers Hamsah Nasirildeen and Jamien Sherwood are former college safeties who are coming off injuries that shortened their rookie seasons. And then, of course, there's the quarterback situation with Zach Wilson's availability uncertain. (See: Camp Development)

CAMP DEVELOPMENT: All eyes were on Wilson's progress in his second training camp, but now the focus is on the second-year quarterback's knee. Wilson suffered a bone bruise and torn meniscus that needed to be surgically repaired. The Jets were optimistic he'll be ready for Week 1, but it's more likely Joe Flacco will open the season under center. New York also had to do some shuffling on the offensive line when right tackle Mekhi Becton was lost for the season with a knee injury. George Fant, the projected starter at left tackle, slid over to the right side to take Becton's place after the Jets signed Brown.

FANTASY PLAYER TO WATCH: Conklin could be a shrewd pick at tight end late in your drafts — and he might work his way into weekly use on your roster. The former Viking had an outstanding training camp, building quick chemistry with both Wilson and Flacco.

EXPECTATIONS: The Jets have more talent on their roster than last year, for sure, and maybe more than they've had in recent years. Wilson's injury threw a wrench into things since New York wasn't quite sure when it'll have him back — and this season is all about his progress. If he comes back and has a solid year, the Jets know they've got their quarterback for now and the future. If not, New York could be in the market for a signal caller — again. And a rough first half of the schedule could put some heat on coach Robert Saleh and general manager Joe Douglas, especially if the Jets aren't playing meaningful games in December with a shot of ending the NFL's longest active postseason drought at 11 years.