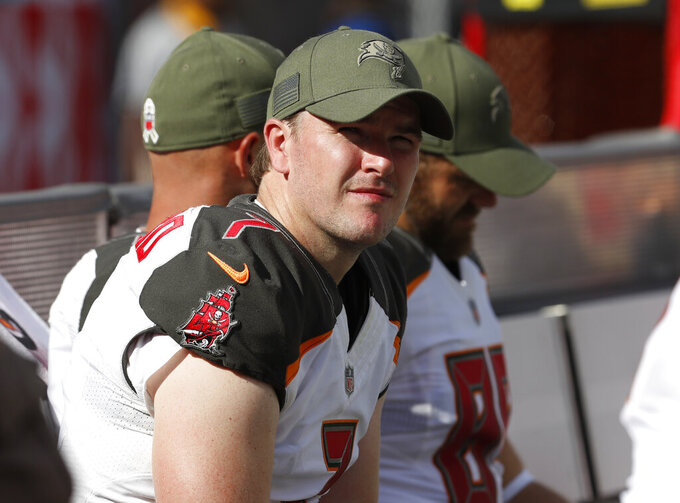 FILE - In this Nov. 11, 2018 file photo, Tampa Bay Buccaneers kicker Chandler Catanzaro (7) on the bench during the first half of an NFL football game against the Washington Redskins in Tampa, Fla. Catanzaro has retired after a shaky start to New York Jets training camp. The team announced Catanzaro's decision Sunday, Aug. 11, 2019. The Jets also signed kicker Taylor Bertolet to replace Catanzaro on the roster. (AP Photo/Mark LoMoglio)

The 28-year-old kicker chose to retire from playing football after a shaky start to training camp.

"He came in and told me that he was done, retiring," Gase said Sunday, a few hours after the team announced Catanzaro's decision.

Catanzaro signed with New York during the offseason for a second stint with the team, but struggled with consistency during camp. He then missed two extra points in the Jets' 31-22 preseason-opening loss to the Giants on Thursday night.

"What a ride," Catanzaro wrote on Instagram. "God has blessed me far more than I deserve. When I finished my career at Clemson, playing in the NFL was just a dream. After five years in the league, it's time to move on. I can't say I ever thought I would've been a kicker, but I'm thankful that kicking chose me."

Gase said Catanzaro didn't give him a detailed reason as to why he wanted to walk away from the game, but the coach added he had no idea the kicker was leaning that way.

"I appreciated the fact that he came in there," Gase said. "He could've easily rode it out and kind of seen what happened. But, I appreciate him doing that at that time and just being straight with me."

Gase then relayed the news to general manager Joe Douglas, who brought in several kickers to work out for the team. The Jets signed Taylor Bertolet, who was impressive while with them last summer before the team decided to go with veteran Jason Myers.

Catanzaro spent his first three NFL seasons with Arizona, including setting the franchise rookie record with 114 points in 2014. He joined New York in 2017, and then played for Tampa Bay and Carolina last season. Catanzaro converted 83.8% of his career field goal attempts, and was 92.9% successful on extra points.

"I've been through the highest of highs, the lowest of lows, and everything in between," Catanzaro wrote. "I've learned so much about myself and about life through the game of football. I have no regrets. I worked my tail off and gave my absolute best every time I stepped onto the field."

New York could look to bring in another kicker to compete with Bertolet, who has no NFL regular-season experience. He made five of his seven attempts during his first practice.

"I mean, this is where we're at right now," Gase said. "We'll kind of see how everything goes. From what I saw today, I was pretty impressed. It sounded good coming off his foot."

Bertolet and Myers had a good competition last summer, and special teams coordinator Brant Boyer was high on the former Texas A&M kicker. But the Jets stuck with Myers, who was selected for his first Pro Bowl but left in March to sign with Seattle in free agency.

The 26-year-old Bertolet last kicked for the Salt Lake Stallions of the Alliance of American Football in the winter. He has also spent time with Denver and the Los Angeles Rams since going undrafted in 2016.

Safety Marcus Maye was activated from the physically unable to perform list after being sidelined since the start of camp while recovering from shoulder surgery in December.

Gase had been uncertain as to when Maye would be back with the team, saying last week that the 2017 second-rounder out of Florida was dealing with a nerve issue in the shoulder. Maye was cleared by doctors and was on the field Sunday, but was a limited participant.

"He's been begging me to get out there," Gase said. "We were trying to be smart about putting him out there. We didn't want to be wrong. If we were a little cautious, then that was fine."

Maye is expected to be a starter opposite Jamal Adams. He has dealt with a handful of injuries the past few years, dating to his college days, and that has limited his time on the field.

"It felt great," Maye said of suiting up again. "It was a long process. But just getting out there and running around, getting the feel of things and just being out there with the guys, it definitely feels good to be back."

CB Trumaine Johnson injured a hamstring while returning an interception for a touchdown in team drills. Gase said the team's top cornerback would have tests, but didn't sound optimistic. "I mean, any time a guy that makes a living running has a hamstring (injury)," the coach said, "we'll just kind of see how it goes." ... Gase said RG Brian Winters is "week to week" with a shoulder injury suffered while lining up during an extra point try in the first quarter against the Giants. ... LB Avery Williamson hurt a foot in the game. ... Rookie LB Blake Cashman has a calf/hamstring injury. ... DE Leonard Williams remains sidelined with irritation in his hip. "We're going to be slow with that and just make sure he's all right," Gase said.