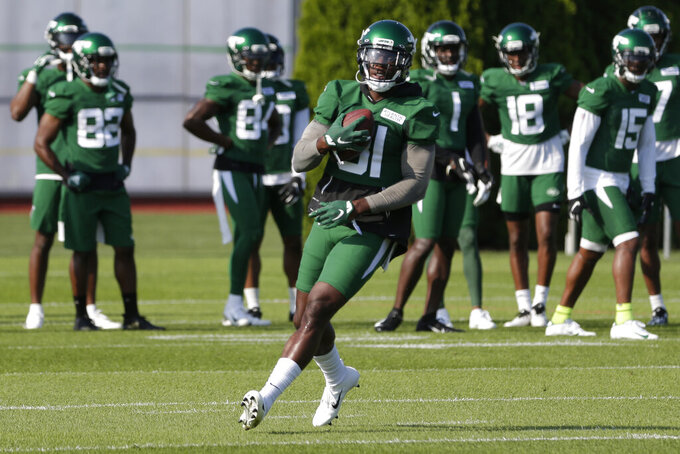 FLORHAM PARK, N.J. (AP) — It appears the New York Jets might open their preseason schedule without a few starters.

Wide receiver Quincy Enunwa injured his groin during practice Tuesday and was set to have tests. Coach Adam Gase did not seem overly concerned, but Enunwa's status is uncertain for the preseason opener Thursday night against the Giants.

"He was trying to go back in practice," Gase said. "I think we're just making sure that he's OK, so that's what they have to do. I don't want to make it more alarming than what it is."

Defensive lineman Leonard Williams has missed two straight practices with a hip injury and seems unlikely to play. Gase said Williams was working on an anti-gravity treadmill during practice.

"I think he'll be all right next week," Gase said, adding that Williams had an MRI. "Yeah, they've done all the stuff they need to do, we're just being slow. He's just kind of sore and we're just being smart with him."

With the veteran out, first-rounder Quinnen Williams has been working with the first-team defense and could see time with the starters against the Giants.

The No. 3 overall pick out of Alabama has had a solid training camp, regularly making plays that flash on the film when the players and coaches review practices.

"I call him, 'Big Baby,' man," safety Jamal Adams said. "He's a guy that obviously is young right now, but he has the mindset of a killer. I'm definitely excited to play with him. I know what he's going to bring to the table. I saw when he was coming off the bench at Alabama, he was coming in and making plays."

Safety Marcus Maye has sat out all of camp while on the active/physically unable to perform list with a shoulder injury. Gase revealed Tuesday that Maye has a nerve issue in the shoulder and that is preventing him from getting onto the practice field.

"We'd like to get him back before the season starts, get him out there and make sure everything's good to go," Gase said. "That's really the thing, we're trying to buy ourselves as much time as possible and once he gets out there, we want him to be able to stay out there. That's why we're just listening to the doctors. He's doing everything he can, but there's nothing he can do about this."

Backup linebacker Harvey Langi, who had a good start to camp, has a knee injury that will sideline him for an uncertain amount of time.

NOTES: Gase did not reveal how long his starters will play Thursday night, saying he wanted to meet with the players first. ... It's uncertain if running back Le'Veon Bell will make his debut for the Jets. Bell, who sat out last season in a contract dispute with Pittsburgh, rarely played in preseason games for the Steelers. "It's a fine line with Le'Veon," Gase said. "He hasn't played in a year. At the same time, when's the right time? Is it this game? Is it the next one? Is it the next one? Do we just not play him this preseason? Do we go through the whole time and just give him reps? All those questions are what we keep talking about." Gases added that Bell hasn't lobbied to him one way or the other. "The one conversation we had about it, he goes, 'Whatever you tell me you want to do, that's what we'll do,'" Gase said. "So, he's been outstanding in that area." ... G Kelechi Osemele said he won't watch his former team, the Oakland Raiders, on HBO's "Hard Knocks," which premieres Tuesday night. "I don't have a television," said Osemele, who said he hasn't owned one in a few years. "If I want to watch something, I get a friend's iPad and log into their Netflix or something." ... OL Alex Lewis passed his physical, making his trade from Baltimore official. Smith was acquired by the Jets on Monday for a conditional seventh-round pick in next year's draft. TE Nick Truesdell was waived to make room on the roster.