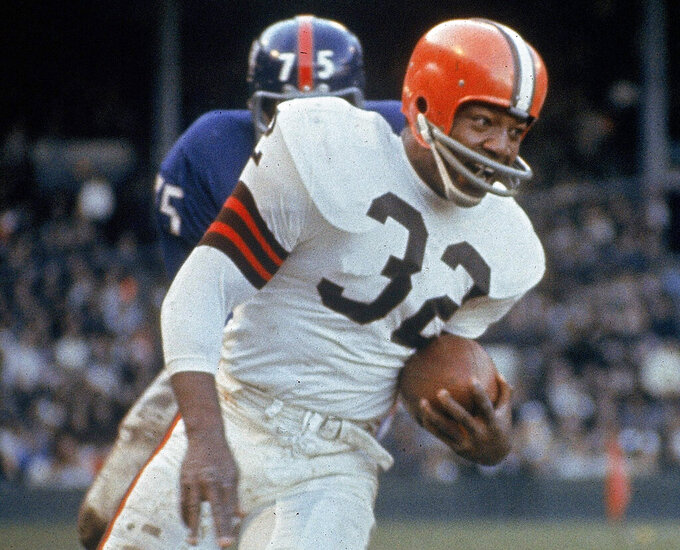 FILE - In this Nov. 14, 1965, file photo, Cleveland Browns running back Jim Brown (32) carries the ball during an NFL football game against the New York Giants in Cleveland. Jim Brown. Period. Arguably the greatest player in NFL history was picked by the Browns with the No. 6 overall pick in 1957. Brown rushed for 12,312 yards in nine seasons, leading the league in eight seasons. The three-time MVP walked away from his career at its peak to pursue acting. (AP Photo/File)

CLEVELAND (AP) — BEST FIRST-ROUND DRAFT PICK: RB Jim Brown. Period. Arguably the greatest player in NFL history was picked by the Browns with the No. 6 overall selection in 1957. Brown rushed for 12,312 yards in nine seasons, leading the league eight times. A three-time MVP, he stunned the sports world by walking away from his career at its peak for Hollywood and acting.

BEST SECOND-ROUND DRAFT PICK: Tie between RB Nick Chubb (2018) and RB Greg Pruitt (1973). Chubb has quickly established himself as one of the league’s top backs, rushing for 2,490 yards and 16 touchdowns in his first two seasons. The versatile Pruitt spent nine seasons with Cleveland and was a breakaway threat every time he touched the ball.

BEST LATE-ROUND DRAFT PICK: QB Brian Sipe. Drafted in the 13th round in 1972 from San Diego State, the undersized Sipe was the league’s MVP in 1980, when he set club records with 30 TD passes and 4,132 yards. Sipe had a flair for the dramatic and led Cleveland's beloved “Kardiac Kids,” a talented team that found ways to win. Sipe played his entire career in Cleveland and became one of the franchise’s most beloved players.

The Browns fell for the Manziel hype and selected him No. 22. Earlier in the round, the Browns traded up to select Oklahoma State cornerback Justin Gilbert at No. 7. He was also a bust. If Cleveland would have just stayed put, it could have taken linebacker Khalil Mack, now one of the game's best players.

Runner-up: Quarterback Mike Phipps with the No. 3 overall pick in 1970. After losing the 1969 title game, the Browns traded three-time Pro Bowl wide receiver Paul Warfield to Miami in exchange for the third pick. They used it on Phipps, who went 24-25-2 as a starter.

WORST SECOND-ROUND DRAFT PICK: LB David Veikune. The third of coach Eric Mangini’s three second-round selections in 2009, Veikune spent one season with Cleveland. He was not credited with a stat despite playing in 10 games.

BEST DRAFT TRADE: The one for quarterback Bernie Kosar. The Browns traded their first-round picks in 1985 and 1986 to Buffalo for the first pick in the ’85 supplemental draft and used it to nab Kosar, an Ohio native who desperately wanted to play for his hometown team.

Kosar led the Browns to three AFC title games in four years, but Cleveland lost all three to Denver and fell just short of a first Super Bowl appearance.

WORST DRAFT TRADE: President Mike Holmgren and general manager Tom Heckert did some wheeling and dealing in 2011, acquiring multiple picks from Atlanta and dropping from the No. 6 spot to No. 21. They wound up taking nose tackle Phil Taylor, a serviceable player. The Falcons, meanwhile, used the sixth pick to nab All-Pro wide receiver Julio Jones.

DID YOU KNOW THEY ONCE DRAFTED?: NBA Hall of Famer John Havlicek. Intrigued by his size (6-foot-5) and athleticism, the Browns selected the Ohio State basketball standout in the seventh round in 1962. Havlicek was a three-sport, all-Ohio athlete in high school and he spent training camp with the Browns before reporting to the Boston Celtics and winning eight NBA titles.