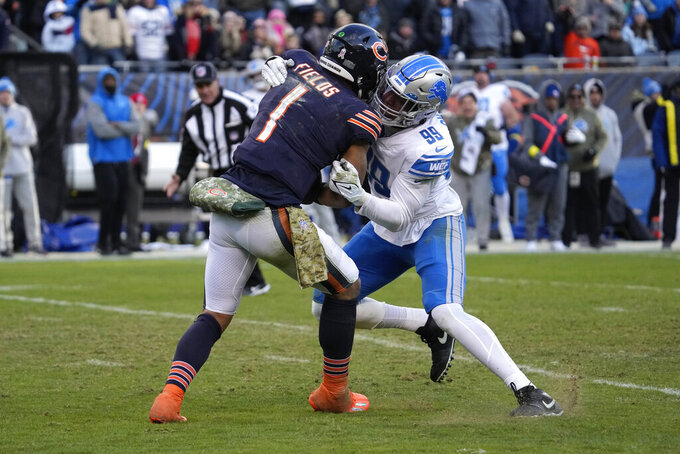 For the Detroit Lions, it would go down as a major development.

The Lions (3-6) haven't won three in a row since November 2017. They can finally match that by defeating the New York Giants (7-2) on Sunday.

“If you really want to become a truly competitive, good team, you have to stack some wins together,” second-year head coach Dan Campbell said. “All the good ones do.”

First, Detroit ended a five-game losing streak by grinding out a 15-9 home victory over Green Bay.

The Lions then defeated another NFC North opponent with an improbable rally.

The Lions hadn't won a road game since the 2020 season.

Chicago quarterback Justin Fields threw for two touchdowns and ran for two more, but the defense came up with some big plays late.

Jeff Okudah returned an interception for a touchdown and Aiden Hutchinson and Julian Okwara had sacks after Jamaal Williams' go-ahead score with 2:21 remaining.

Campbell said while the results have been different, his coaching staff's approach has remained the same.

“We're not changing anything,” he said. “Everything we've preached since Day 1, we're still preaching the same thing. We tweaked a couple of things schematically, but ultimately nothing is changed.”

Ball security has improved dramatically. Detroit didn’t have a turnover in Chicago and has lost the ball just once in the past three games — Jared Goff was intercepted early in the second half in the victory over Green Bay.

The three previous games, all losses, the Lions turned the ball over nine times, including five giveaways against Dallas.

Mobile quarterbacks have broken containment throughout the season against Detroit.

Philadelphia’s Jalen Hurts rushed for 90 yards and a touchdown on 17 carries in the season opener. Seattle’s Geno Smith gained 49 yards on seven carries and also scored a touchdown.

Fields had a big game against Detroit’s run defense, piling up 147 yards and two touchdowns on 13 carries. That included a 67-yard score in which Fields found an opening on the right side and raced untouched into the end zone.

The Giants’ Daniel Jones, who has rushed for 387 yards and three touchdowns this season, presents another schematic challenge this Sunday.

Okudah’s first two seasons in the league were a disappointment. The No. 3 overall pick of the 2020 draft had an uneven rookie season that was cut short by a groin injury. He suffered a torn Achilles tendon in last season’s opener.

In his third season, Okudah has become a force both as a cover corner and playmaker. He had 15 tackles at Dallas, knocked away an attempted 2-point conversion pass against the Packers, then made the biggest play of his career against the Bears.

With every victory, the Lions move further away from the No. 1 overall pick in next year’s draft.

Detroit drafted franchise quarterback Matthew Stafford with the top pick in 2009. Unless Goff has an exceptionally strong finish, the Lions will likely be seeking a top-flight quarterback in the next draft.

The good news for the Lions is that they also own Los Angeles’ first-rounder, courtesy of the Stafford trade last year, and the Rams have the same record as they do.

OL Frank Ragnow was wearing a walking boot on his left foot after the game. Campbell lists him as day to day.

3,000 — Okudah’s interception return was the 3,000th touchdown in Lions history. Those touchdowns have been earned by 474 players.

Find another consistent receiving threat would take some pressure off Amon-Ra St. Brown.

He’s caught 14 passes in the past two games after the team dealt tight end T.J. Hockenson to Minnesota at the trade deadline. The rest of the team’s wide receivers and tight ends have made 13 receptions during that span.