Lions, Patriots looking to bounce back from 1-3 starts 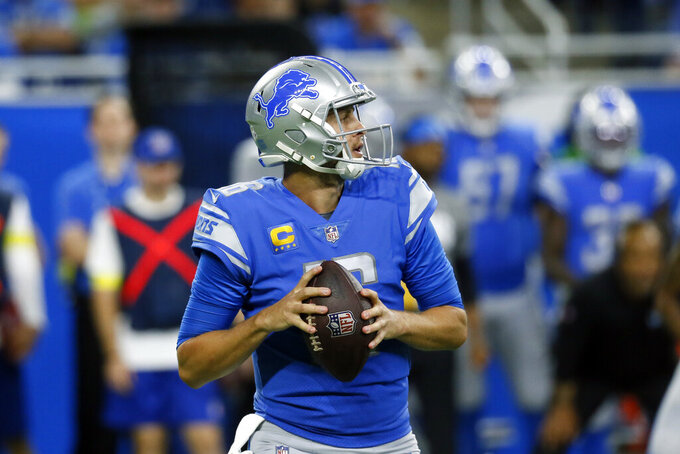 The New England Patriots are reeling for a different reason and could use a victory just as bad as the teams prepare to match up on Sunday.

Through four weeks, the Lions are averaging an NFL-high 35 points and a league-high 437 yards per game. But even 45 points wasn’t enough to beat Seattle at Ford Field last week, dropping Detroit to 1-3 as it tries to avoid a fifth straight season with at least 10 losses.

“We are as good as your record says (we) are,” Lions quarterback Jared Goff said. “So maybe we’ve done some good things that reflect otherwise in some areas, but at the same time, it’s been three games not good enough, and one that was.”

Detroit is the first team in NFL history to score and give up a combined 281 points through the first four games of a season.

“The script can be flipped,” Detroit cornerback Amani Oruwariye said. “I’ve seen it happen. Just got to believe.”

The Patriots are also 1-3 after losing their second quarterback in three weeks to injury when Brian Hoyer was knocked out of their 27-24 overtime loss at Green Bay.

Regular starter Mac Jones was inactive in that game recovering from an ankle injury and began the week limited in practice, while Hoyer was placed on injured reserve with a concussion. It could mean the first career start for rookie Bailey Zappe, who came off the bench and nearly rallied the Patriots to victory against the Packers.

The fourth-round pick said he’s ready for anything asked of him this week.

“Kind of have the mindset of 1% better every day,” Zappe said. “Taking it that way and just going to practice every day with the mindset of taking every rep like a game rep.”

If Zappe does start, in his ear will be someone familiar to the Lions.

Matt Patricia has taken on play-calling duties in his second season back as an assistant in New England after being fired 11 games into his third season as Detroit’s coach in 2020.

Lions coach Dan Campbell said he feels as if his predecessor has found a groove in his new role this season.

New England hasn’t faced this much shakeup at the position since 2016.

Jimmy Garoppolo started the first two games of that season with Tom Brady serving his four-game “Deflategate” suspension. Jacoby Brissett took over in Weeks 3 and 4 after Garoppolo was hurt before Brady returned in Week 5.

This won’t be Campbell’s first time coaching against Belichick.

Campbell went 1-1 against him in 2015 with Miami after being promoted to interim head coach following the firing of Joe Philbin. Campbell does not know Belichick personally. He knows his reputation, though.

“I obviously respect the heck out of him and I know what he’s about,” Campbell said. “And he’s arguably the best coach that ever coached this game. So, I mean it’s hard to argue with what he’s done.”

Patriots linebacker Matt Judon is 1 of 3 players in the NFL (Nick Bosa, Rashan Gary) with a sack in each of the first four weeks of the season.

He is the second Patriots player to start a season with at least one sack in his first four games. He joins Pro Football Hall of Famer Andre Tippett, who did it in 1986.

Judon had a sack in his only career game against the Lions while playing for Baltimore in 2017.