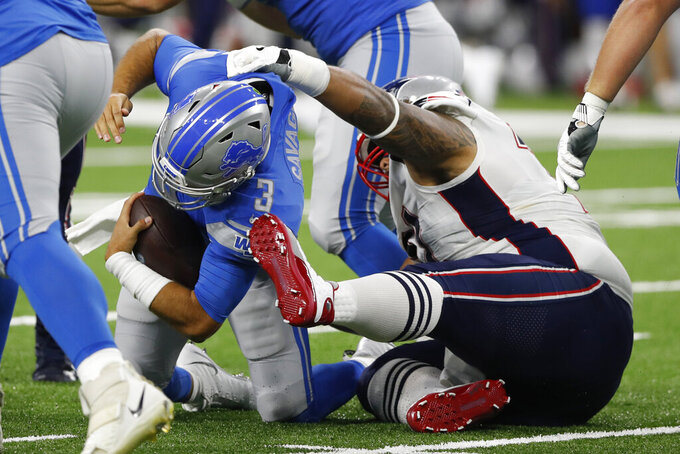 ALLEN PARK, Mich. (AP) — Jermaine Kearse checked several boxes for the Detroit Lions when they brought in the wide receiver as a free agent during mini-camp in June.

Kearse was familiar with new offensive coordinator Darrell Bevell's scheme, had the flexibility to play outside or in the slot, and added a veteran presence to a locker room that formerly had strong wide receiver leadership from Golden Tate, Kearse's former teammate in Seattle.

Now that Kearse is out indefinitely after suffering a gruesome injury on Thursday during the first possession of the preseason opener, the Lions must look elsewhere to fill those roles.

The 29-year-old Kearse and defensive tackle Darius Kilgo were placed on injured reserve Saturday, and coach Matt Patricia confirmed quarterback Tom Savage is in the concussion protocol after hitting his head on the turf on a sack during New England's 31-3 thumping of Detroit.

The Lions reacted by signing quarterback Josh Johnson and running back Justin Stockton.

Detroit did receive some good injury news as defensive end Trey Flowers, who signed a five-year deal for $90 million in the offseason, was activated from the physically unable to perform list.

Kearse was blocking on a running play by Ty Johnson when a New England player landed on him from behind. It was the fifth play from scrimmage during the game, which starting receivers Marvin Jones Jr., Kenny Golladay and Danny Amendola sat out.

While the stretcher was called and an air cast was placed on Kearse's left leg, Patricia's own injury prevented him from being out there.

Patricia was immobile on the sideline because of an offseason lower-leg surgery, perched high on a platform of exercise boxes near midfield, back several feet from the sideline.

"I felt very stuck from my point where I couldn't get out there and couldn't get out and see him," Patricia said Saturday. "That was really kind of tough from that standpoint. Unbelievable guy. We've been talking non-stop and obviously a big part of what we've been doing so far."

Kearse's injury creates an opportunity for receivers down the depth chart, such as Chris Lacy and Tom Kennedy, who caught touchdown passes late at practice Saturday in full squad work.

Undrafted rookie Jonathan Duhart of Old Dominion also caught passes on consecutive plays, including a toe-tapper near the sideline, firing up his offensive teammates.

"Jermaine is a vet in this league, just a great guy," Duhart said. "He came in and helped me out a lot personally, a guy I always looked up to. It's always tough to see him go down, but at the end of the day, as a receiving corps we have to step up and fill in for him."

Duhart played on the outside and in the slot in college, plus special teams early in his career. All of the slot receivers behind Amendola — Brandon Powell, Tommylee Lewis and Kennedy — can contribute in the return game.

"One of the things that we're always preaching, no matter what the position, is versatility," Patricia said. "The more versatility that you have, the more value you can add to the team."

With quarterback Matthew Stafford out with a rest day, Johnson got plenty of reps in his first day at camp. The Lions are team No. 13 for Tampa Bay's 2008 fifth-round pick out of San Diego.

"He knows a lot of systems," said safety Andrew Adams, who played with Johnson with the New York Giants in 2017. "He knows the way different coaches and coordinators think. For defense, I'll probably be eventually be asking him questions about what does a quarterback look at when you see this. He'll make me better as well."

Johnson, 33, played four games for Washington last season, starting three. He completed 52 of 91 passes for 590 yards and three touchdowns, rushing for 120 yards and a score. In his career, he's played 33 games, throwing for 1,632 yards and eight touchdowns and rushing for 394 yards and one touchdown.