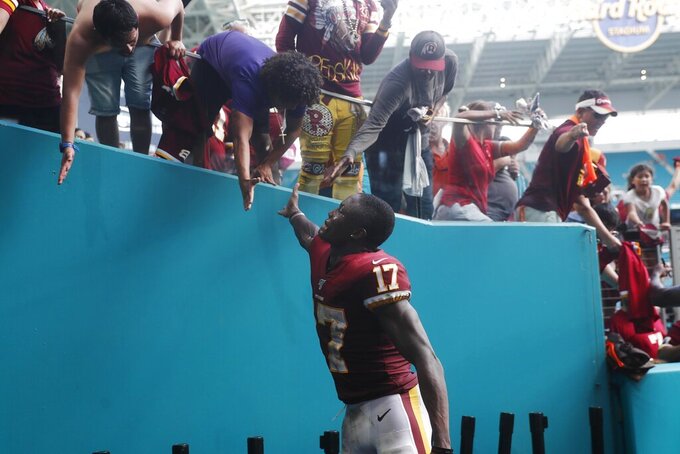 When the rookie receiver came back to the Washington Redskins huddle, the elder statesman of the offensive line lost his cool.

"Terry, come here," Penn yelled. "Terry, we need that. Catch the ball before you run with it."

McLaurin didn't get his back up about the criticism. He promised Penn he'd make up for the drop and did so the next time the ball went his way, a big gain that helped Washington beat Miami for its first victory of the season.

By that point, the third-round pick out of Ohio State already had two touchdown catches and proved to be a matchup nightmare to opposing defenses. But McLaurin has become the Redskins' best offensive player after taking part in just five NFL games and is one of the few bright spots in a lost season because of a maturity beyond his years paired with a lot of talent.

"He is focused, he is high energy, he's tuned in and nothing kind of gets by him," interim coach Bill Callahan said Wednesday. "As he just continues to work diligently and he maintains his focus and shows continual improvement, the sky's the limit for him. We're just really happy for him and good to see him have the success he's had this year and he's really helped our offensive unit by a large stretch."

McLaurin's 23 catches, 408 yards and five touchdowns lead all rookies. He's the first rookie receiver since Terry Glenn in 1996 with 50-plus yards receiving in each of his first five games.

This level of production is no surprise to the Redskins coaching staff or anyone who watched McLaurin in training camp. A handful of practices were enough evidence to show he was already better than (since released) 2016 first-round pick Josh Doctson and probably the best receiver on the team.

McLaurin wasn't sure how big a role he'd have this season. It's a big one and just keeps growing.

"I felt like I had a good chance of being a contributor on this offense," McLaurin said. "And then when I stepped into the starting role, I knew my play needed to increase that much more. I felt like it's continually changing and growing in that offense, which I'm very excited about, and I feel like that's because I'm giving our coaches and the quarterback a great sense of confidence in me. That's what you want to do as any player, especially as a rookie."

Case Keenum, who's expected to again start at quarterback Sunday against the unbeaten San Francisco 49ers, called McLaurin a "very friendly target." At 6 feet and 210 pounds, he's not physically imposing but is meticulous in how he runs routes and believes it's his job to make a quarterback's job easier.

"He's a special guy," Keenum said. "He's really hard worker, he's extremely talented and he's friendly on the eyes as a quarterback. Just the body language he gives in and out of breaks, it makes sense. I know where he's going to be at all times."

It'll be up to 49ers cornerback Richard Sherman and a stingy San Francisco 49ers defense to keep track of McLaurin this week. A 100-yard effort against the Dolphins looks like just the start of McLaurin tearing up opposing defenses as he gets more accustomed to the pro game.

"I've been feeling more comfortable as the weeks have gone on," McLaurin said. "I feel like the coach is doing a good job of really putting me in positions to be successful, the quarterbacks are putting the ball where they need it to be, so I'm just trying to make the plays when they come to me."

And when he doesn't, it's back to the drawing board. McLaurin struggled with drops at Ohio State and on Wednesday put a focus on seeing every ball into his arms like an outfielder watches a fly ball into his glove.

That attention to detail — and the willingness to beat himself up over mistakes — has earned McLaurin some major respect among veteran teammates.

"I fell in love with the guy on Sunday — he's my new little guy now," Penn said. "He's quiet. He's real humble. He just goes about his business and works hard."

McLaurin is trying to ignore buzz about being in the running for offensive rookie of the year but knows the NFL is a production-based league. As his production increases, so have the attempts at a nickname: Keenum suggested "Scary Terry," fellow receiver Trey Quinn threw out "SecreTerry of Offense."

The unassuming 24-year-old prefers something more along the lines of "F1 McLaurin" to play off the McLaren racing team or what buddies call him back home: "T-Mac" or "MacMania."

"A play on words with my last name, I'm all friendly with that," McLaurin said.

Given how much the Redskins adore him already, perhaps a "Superbad" inspired "McLovin" fits their newest star.