Macdonald wants Ravens to be flexible on defense 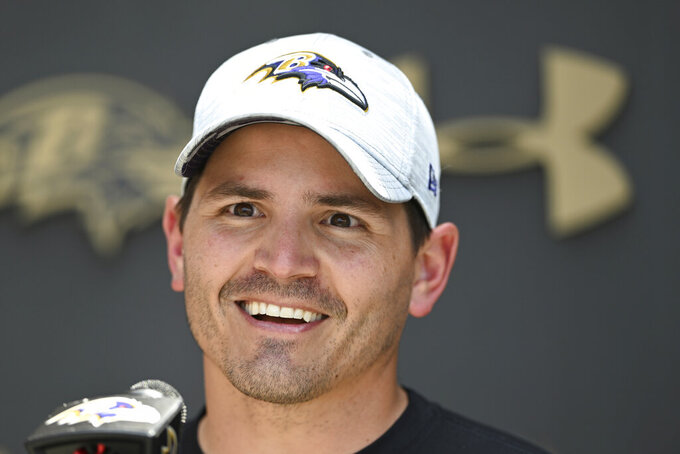 OWINGS MILLS, Md. (AP) — Mike Macdonald is stressing versatility as he takes over the defense for the Baltimore Ravens.

Macdonald is back with Baltimore, now as the defensive coordinator after he previously worked for the team as a position coach. He took a one-year hiatus from the NFL in 2021 as Michigan's defensive coordinator — helping the Wolverines to a Big Ten title — before returning to the Ravens in that same role.

He rejoins a team that is itching to put last season's 8-9 record in the past.

“We have so many great pieces, and the way we’re trying to teach the system is so conceptual. We’re really not asking them to play positions per se all the time,” Macdonald said after practice Wednesday. "Guys are expected to learn what that play call entails.”

That was in response to a question about safety Chuck Clark, whose role seems unclear after Baltimore signed free agent safety Marcus Williams and drafted safety Kyle Hamilton in the first round. The Ravens have made additions to the secondary after ranking last in the NFL against the pass.

Injuries played a significant role in those struggles. Cornerback Marcus Peters missed the whole season, and cornerback Marlon Humphrey was out toward the end. If the Ravens can stay healthy, they should indeed have plenty of options in the defensive backfield, and Macdonald seems to be coaching with that in mind.

“We don’t just play one position. We can play each position," Williams said. "He puts it like that for us, so that we know everything, really.”

In addition to Williams, the Ravens added cornerback Kyle Fuller recently. Macdonald said his approach depends on how the team's roster is constructed.

“We had a different mentality at Michigan," he said. "We had like seven guys in the outside backer room that could play. ‘OK, how do we get these guys out there?’ It was same idea, but just different position group.”

Humphrey, an All-Pro in 2019, sounds excited about what Baltimore's new-look defense can do to keep opponents off balance.

“We want to have it to where any DB can play any position at any time. I think that’s kind of the vision I’ve seen behind it. I’m getting reps inside. I’m going to get some reps at safety, get some reps here. Chuck comes down and plays corner," he said.

For the 34-year-old Macdonald, this season is another step in an impressive rise that included time as a defensive backs coach and a linebackers coach before he became a defensive coordinator.

“It is a little surreal, being back in the building in a different role. Took me a little bit of a while to get used to, but it's a fun process," he said. "It's working with the guys. So you get to work with the whole defense now, rather than just one group, so that's definitely been a positive.”