Manziel confident as he begins his latest football comeback 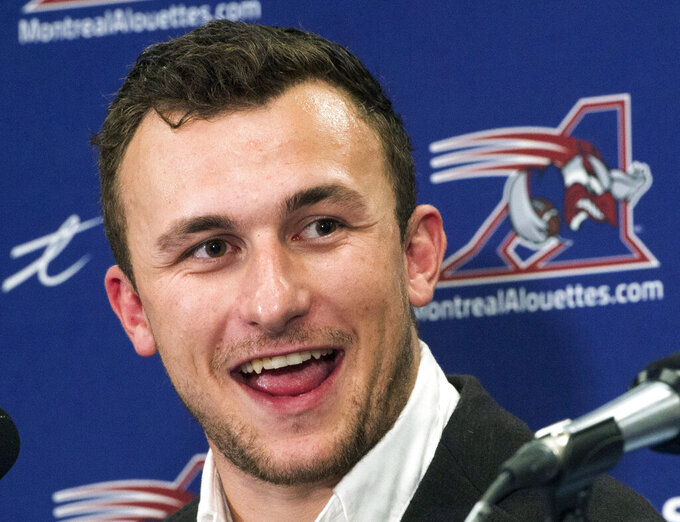 FILE - In this July 23, 2018, file photo, Montreal Alouettes quarterback Johnny Manziel speaks to the media after practice in Montreal. Manziel has been signed by the Alliance of American Football and will join the Memphis Express. The quarterback's rights belonged to San Antonio of the spring league, but that team declined to sign him and Manziel then was free to join any of the other seven clubs. (Ryan Remiorz/The Canadian Press via AP, File)

MEMPHIS, Tenn. (AP) — Johnny Manziel says he remains confident in his ability to play football "at any level" as the 2012 Heisman Trophy winner attempts another comeback, this time with the Alliance of American Football's Memphis Express.

An introductory news conference was held Tuesday in Memphis for Manziel, who agreed over the weekend to join the new league. The former first-round draft pick out of Texas A&M dealt with a series of off-field issues during his stints in the NFL and CFL.

"My confidence level is high," Manziel said. "I believe I still have a unique skill set and still have the ability to play at any level anywhere."

Manziel's rights in the AAF belonged to the San Antonio Commanders, but they declined to sign him. He was awarded through the league's waiver system to the Express, who have a league-worst 1-5 record.

He joins the spring league for its inaugural season less than a month after the CFL terminated his contract with the Montreal Alouettes. CFL officials also informed the league's other eight teams that they wouldn't register a contract for Manziel if any tried to sign him.

CFL Commissioner Randy Ambrosie said Manziel "had violated one of the conditions we had set for him to be in our league" without offering specifics.

Manziel had sought treatment for anger management and alcohol abuse as part of his acquittal on a 2016 charge of domestic violence.

Express coach Mike Singletary was happy to take a chance on the guy who earned the nickname "Johnny Football" while dazzling Southeastern Conference crowds with his combination of passing and running prowess.

"Our guys are excited, our team is excited and I feel that many of the people here in Memphis are excited," Singletary said.

Manziel said he is refocusing his life and believes playing football again will help.

"I've done a lot of soul searching and a lot of looking at myself in the mirror and coming to the realization that when I'm on a football field and on a team, my life is substantially better," he said.

Manziel went 2-6 as a starter with Montreal last season and completed 64.2 percent of his passes for 1,290 yards with five touchdowns and seven interceptions. He also ran for 215 yards on 29 carries.

His pro career began with the Cleveland Browns, who selected him with the 22nd overall pick in the 2014 draft. Manziel made two starts in 2014 and six more in 2015 before the Browns released him in March 2016.

His arrival could boost a Memphis team that has dealt with adversity at the quarterback position.

Zach Mettenberger replaced Christian Hackenberg as the Express' starting QB early in the season. Mettenberger injured an ankle Saturday on the first play from scrimmage and was unable to return in the team's 22-9 loss at Salt Lake. He was replaced by Brandon Silvers.

"In my eyes and in my mind, I believe I'm here for a reason," Manziel said. "This is a great fit for me."