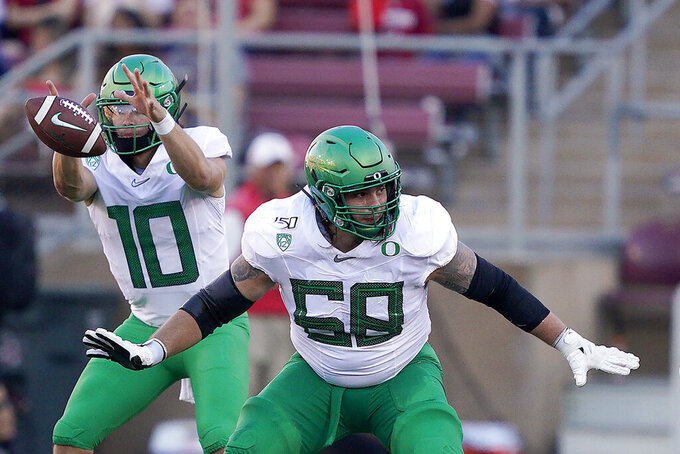 A little more than a week before the NFL draft, rookie New York Giants coach Joe Judge said versatility was something he wanted from his players, especially the new ones.

Listening to three of the Giants' draft choices Tuesday, it was clear Judge got his type of players in the draft last week.

Fifth-round draft choice Shane Lemieux of Oregon already is learning how to play center in addition to being a guard.

Linebackers Cam Brown of Penn State, a sixth-round choice, and Carter Coughlin of Minnesota, the first of four seventh-round choices, have already shown multiple abilities on the field. They can rush the passer, play linebacker and help out on special teams. They are also team-first guys.

“You know, I think that the Swiss Army knife was always useful,” Coughlin said Tuesday on a conference call.

Lemieux started 52 games at left guard for Oregon. He never missed a practice and the only meaningful play he missed came in his sophomore season when he lost a shoe and had to come off the field.

He has spent the past four months in Arizona training in a private facility, practicing social distancing and working on being a center and a right guard.

“Especially as a rookie, there’s not really a guard that only plays guard,” Lemieux said. “Versatility is the biggest factor in this game. Coaches want to be able to put you in multiple spots. I have really good mentors that told me that at training camp, no matter where you are, they are going to throw you in, and you have to be ready. I just want to be prepared before that happened.”

Brown made his mark on special teams in his first two seasons at Penn State and was a starter in his last two, playing playing all three linebacker spots. At 6-foot-5, he rushed the passer, dropped back in coverage and played the run.

“I would jump from position to WILL to SAM and back to MIKE,” Brown said. “Honestly, for me, I feel that versatility and that diversity and positions I played will only help me. I don't mind that people may have overlooked me. That's fine. I made my way to the NFL and I am ready to show what I can do there.”

Judge said the only thing he cares about is having players who can fit into a system and then expand it.

“To me, every player has to have a level of versatility,” Judge said. “I don’t care if you are a one-position offensive lineman or you’re the quarterback. Everyone has to have versatility within their game to adjust to different game plans and schemes. If you find a player that has great impact and upside, that’s a guy you want to add to your roster.”

Once that's done, it's up to the coaches to be creative and maximize strengths in order to help the team win.

After winning only 12 games in the past three seasons, that's something the Giants need.