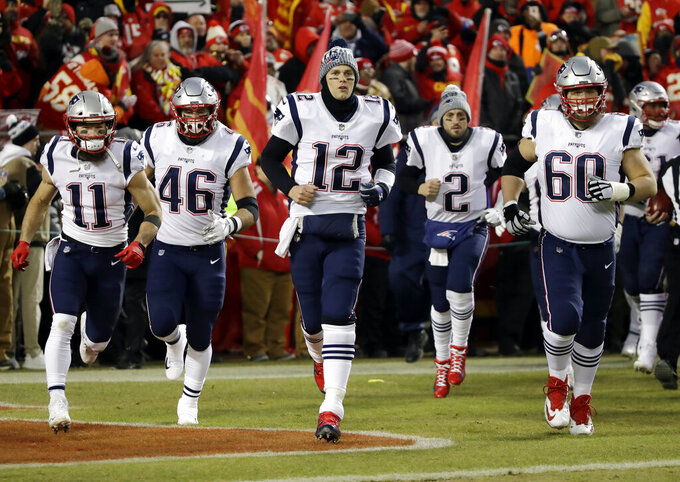 FILE - In this Jan. 20, 2019, file photo, New England Patriots quarterback Tom Brady (12) leads the team onto the field for the AFC championship NFL football game against the Kansas City Chiefs in Kansas City, Mo. The Patriots have been playing down the fact they weren’t chosen for the opener of the NFL’s 100th season despite their latest Lombardi Trophy. But their coaching staff finds little items to push the players’ buttons, and Brady is as strong a motivator to teammates as anyone in the league. The Patriots play the Pittsburgh Steelers in Foxborough this week. (AP Photo/Elise Amendola, File)

No team has drawn more attention, positive and negative, heading into the NFL's 100th season than the Cleveland Browns.

The Raiders are close for drama in their final year in Oakland, but Baker Mayfield and crew take the headline honors.

Beginning Sunday when they host Tennessee, we'll find out if the new and improved Browns are exactly that, and a playoff contender. Or if they will do what the Browns nearly always have done since returning to the NFL in 1999, and disappoint the Dawg Pound.

"I'm very excited to see what we can do, what we're capable of doing out there," Mayfield said. "Nobody has done anything yet, so I'd say everyone is starting the same: square one. I'd say it's pretty hard to live up to any hype if you're listening to the outside. None of that really matters. We've got a bunch of guys who have bought in to what's going on in this building and the standards that we're setting. So to us that's all that matters."

The Titans have been a contender the past three years, going 9-7 each time and making the playoffs once. Their defense ought to be stout, and figures to get tested by Mayfield throwing to Odell Beckham Jr. and Jarvis Landry, plus Nick Chubb running the ball.

"Definitely starting the season with a great challenge," Titans cornerback Logan Ryan said. "They're great players. We know that. We're going to do what we always do and prepare for them. Study all their routes, study everything they do ... and go out there and challenge them. That's the nature of this game. That's how you make a living in this game is going and covering good guys every week, and those are some good guys."

The centennial season began Thursday night in Chicago with the Green Bay Packers' 10-3 victory over the Bears. Aaron Rodgers hit Jimmy Graham in the second quarter for the only touchdown.

The Patriots have been playing down the fact they weren't chosen for the opener of the NFL's 100th season despite their latest Lombardi Trophy. But their coaching staff finds little items to push the players' buttons, and Tom Brady is as strong a motivator to teammates as anyone in the league.

New England does have some major questions marks at receiver and tight end, and on the D-line. But somehow those things tend to work out.

Pittsburgh lost two of its biggest stars in receiver Antonio Brown, now in Oakland, and running back Le'Veon Bell (Jets). But many in the Steel City are seeing that as eliminating huge distractions.

Two coaches, Dan Quinn with the Falcons, Mike Zimmer with the Vikings, who need quick starts and solid seasons to enhance their job security.

For Quinn, a defensive guru as a coordinator, getting that unit more stingy is a must. A healthy group will help — injuries ravaged the Atlanta D last year.

The Falcons also went with offensive linemen Chris Lindstrom and Kaleb McGary in the first round of the draft. The O-line faces a solid defense in Minnesota, which ranked fourth in yards allowed and ninth in points allowed last year. But the Vikings also have blocking concerns on offense.

Potent throughout 2018 and into the playoffs, the Rams could do little with the ball in the Super Bowl. That memory has to burn coach Sean McVay and, especially, QB Jared Goff, who didn't look ready for the big-game spotlight. If running back Todd Gurley isn't hampered by seemingly chronic knee issues, this still is among the most dangerous offense in football.

Opening with a cross-country trip sure beats going from LA to Charlotte in midseason, and the Rams face a Panthers team plagued by uncertainty in many areas. Not a problem is Carolina's versatile RB Christian McCaffrey, who would truly impress if he can have a huge game against two-time Defensive Player of the Year Aaron Donald and the Rams' solid defense.

After all those moves recently, the Texans have a new look that might solve two of their biggest issues from 2018: Can they protect Deshaun Watson, and who will be the wideout opposite sensational DeAndre Hopkins. Houston traded for left tackle Laremy Tunsil and WR Kenny Stills. Of course, the Texans also sent Jadeveon Clowney to Seattle when they couldn't reach a contract solution with the pass rusher.

This prime-time matchup is the first opportunity for the Saints to step on the field for a real game since, as they would say in the Big Easy, "Dey wuz robbed" in the NFC title game. New Orleans might have the most talent in the league, led by the incomparable Drew Brees.

Then again, at least on offense, the mother lode is in KC, led by 2018 MVP Patrick Mahomes. For Mahomes to match last season — 50 TDs passing, 113.8 rating, off-the-charts creativity — might be expecting a bit much. Or maybe expecting too little.

"We got a lot of experience last year. We played in a lot of big games. We won some, we lost some," Mahomes said. "What you learn from those games, you see what you have to do to be a great football team. For us this year, it's all about just taking that next step."

For the Jaguars, it's about reversing their direction after falling from AFC championship game losers to 5-11. Getting RB Leonard Fournette straightened out would help, and new QB Nick Foles has an enviable track record in the toughest spots.

Baltimore will be one of the more intriguing teams as it grows on offense with second-year quarterback Lamar Jackson and also tries to remain powerful on defense despite some major defections. Adding safety Earl Thomas, with a mammoth chip on his shoulder after how things ended for him in Seattle, could provide a significant boost.

All we can say about the Dolphins is: When does the draft begin next April?

Miami's "we're not tanking" tank-job approach could rob the Bengals of being the AFC's worst outfit. New coach Zac Taylor has a roster in transition in a prove-it year for quarterback Andy Dalton.

Plus, for a while, Dalton doesn't have star receiver A.J. Green (ankle). Cincinnati should be able to run the ball decently and has a solid defensive base up front. But the overall talent level is low.

Can't say the same in Seattle, where coach Pete Carroll and GM John Schneider have retooled while remaining competitive. Adding Clowney to bolster what looked like a mediocre pass rush adds to the belief the Seahawks once more will be a playoff bunch. But they can't stumble in matchups such as this.

Indy showed its faith in Jacoby Brissett — what else could the Colts do after Andrew Luck's retirement — by signing him to a rich deal. While Brissett isn't likely to be the kind of lights-out performer that Luck often was, he's hardly a desperation option. Also, don't forget how well the Colts have drafted in recent years. They might have some more gems in 2019.

The Chargers basically told Melvin Gordon to go away if he won't play under his current contract, but unlike Indy without Luck, the Chargers remain loaded and a Super Bowl threat. So much will depend on the pass rush provided by Melvin Ingram and Joey Bosa.

As long as QB Carson Wentz is on the field, the Eagles should fly. Coach Doug Pederson's offense doesn't have many big names — TE Zach Ertz and C Jason Kelce are outstanding — but it runs so efficiently with Wentz that Philly ranks among the NFL's elite. The defense has some questions, particularly in the front seven.

But Washington isn't likely to test that D given all the upheaval in the nation's capital. Not having star left tackle Trent Williams really hurts.

Zeke is back. Whether he suits up Sunday after the summer-long holdout, or is a factor if in uniform, could determine the winner in Big D.

Regardless, the Cowboys are in good position for a solid start facing the Giants, Redskins and Dolphins at the outset, and with a developing defense that figures to get after the passer.

And the Dallas D figures to succeed against Eli Manning if New York hasn't fixed its seemingly habitual blocking problems. If 2018 Offensive Rookie of the Year Saquon Barkley has a big game here, retire his number.

A traditional rivalry game, too, with roots back to the AFL.

The sight of Jon Gruden rocking out to Metallica makes one wonder if the Raiders coach will have his troops "Seek and Destroy" the Broncos in the prime-time doubleheader nightcap. Gruden certainly has more weapons at his disposal; of course, he dispersed some of his top players a year ago in his return to the sideline.

New Denver QB Joe Flacco and longtime defensive coordinator Vic Fangio, in his first gig as a head man, would prefer to make the Raiders "Fade to Black."

New England is being awarded its 11th successive AFC East title by default. Not by these two teams, but if they are realistic, the Jets and Bills recognize they are competing for a wild-card spot with a successful year.

So this becomes a key opener, with both clubs expecting huge improvement from their second-year QBs, Sam Darnold in New York, Josh Allen in Buffalo.

"Electric," Darnold says of his team's offense. "I think we're going to do some fun things out there with all the tempo and all the different things we can do, so it will be fun."

As long as they don't have a blackout.

A couple of relatively unproven but highly paid QBs on teams whose defenses also must step up. Jimmy Garoppolo should get the chance against the Buccaneers' leaky D, and the same could be true for Jameis Winston against the Niners. Of most intrigue is the return to coaching after a one-year hiatus by Bruce Arians. You can bet Winston will be prepared well by the QB whisperer.

Top overall draft choice Kyler Murray will run (and probably often scramble in) new coach Kliff Kingsbury's wide-open and sometimes wild attack. The Lions could be a difficult matchup for Murray if coach Matt Patricia can implement the kind of defense he coordinated in New England. Patricia failed at that last season in Detroit.