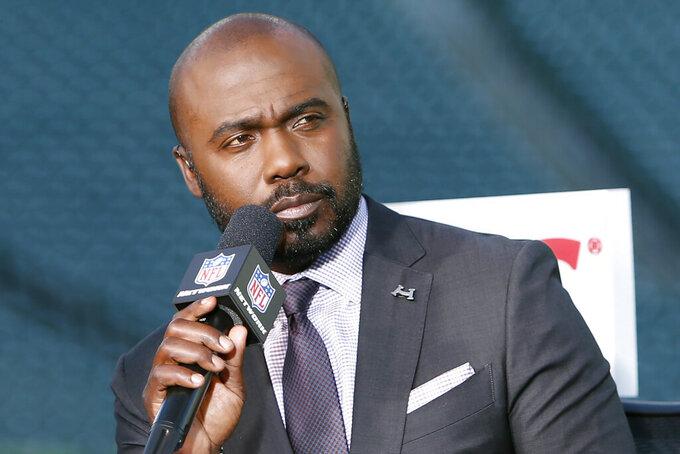 FILE - This Sept. 14, 2017, file photo shows NFL analyst Marshall Faulk speaking during a pre-game show before an NFL football game between the Cincinnati Bengals and the Houston Texans, in Cincinnati. Marshall Faulk's high school football coach died of COVID-19 early on in the pandemic. The coronavirus hit home for Rod Woodson when he and his family got sick and his daughter's boyfriend lost his father to the disease. They are two of 15 Hall of Famers and 40 current and former players who are part of a community outreach and education initiative to help build COVID-19 vaccination confidence.(AP Photo/Frank Victores, File)

Marshall Faulk's high school football coach died of COVID-19 early on in the pandemic. The coronavirus hit home for Rod Woodson when he and his family got sick and his daughter's boyfriend lost his father.

They are two of 15 Hall of Famers among 40 current and former players who are part of a community outreach and education campaign to help build COVID-19 vaccination confidence.

NFL Alumni Health teamed with the Centers for Disease Control and Prevention to launch the program as vaccination rates have slowed this summer just as the Delta variant is causing cases to spike.

“We may be in the proverbial ‘red zone,’ but the fight isn’t over," said NFL Alumni CEO Beasley Reece. "We hope that the voices of our NFL Alumni will help inspire people who have not yet been vaccinated to explore their concerns with a health care professional, get the facts and decide to protect themselves and others.”

The campaign aims to dispel common myths about the vaccine and encourage the undecided to seek advice from their healthcare professionals to help them make up their minds.

The initiative includes public service announcements, a campaign website and appearances by the former players at vaccination events across the country.

Woodson said he's sure more people will get jabs in their arms if they ignore the din on social media and ask their healthcare professionals about the vaccine.

“I’m not a person to get the flu shot every year. But this is completely different,” Woodson said. “That’s why I think you’ve got to make the right decision and be educated. I think you should always continue your education no matter what happens. But when a pandemic hits us in our backyard, then we should just listen to the experts and not make this political. This is about life and death.

“He got COVID, went into the hospital and never came out,” Woodson said. “When I saw the hurt in my daughter’s boyfriend’s face from his father dying, I mean, that was like, no, I can’t be that guy to do that to somebody else.”

The disease hit home for Faulk when Wayne Reese, his coach at George Washington Carver High School in New Orleans, died at age 74 after contracting COVID-19 in spring 2020 after 49 years of coaching..

Faulk and Woodson said their message is the same to the dozens of NFL players who are choosing not to get vaccinated and so must adhere to the strict safety protocols that include daily virus tests and mask mandates.

“If how you lived your life and played your season last year, if that’s OK with you, then continue on,” Faulk said.

Added Woodson: “We’re very fortunate to play a sport, a game, and get paid extremely well for it. And here in America the one thing we deem very necessary is our freedom of choice. And they do get to exercise that freedom by not getting vaccinated.

“But the one thing I love that the NFL did this year was to say, ‘OK, you’re exercising your freedom not to get it, well we’re going to exercise our freedom as a company. If you cause a game to be canceled, you’re going to forfeit that and then we’re going to fine you. And nobody gets paid on either team on top of that,'" Woodson said.