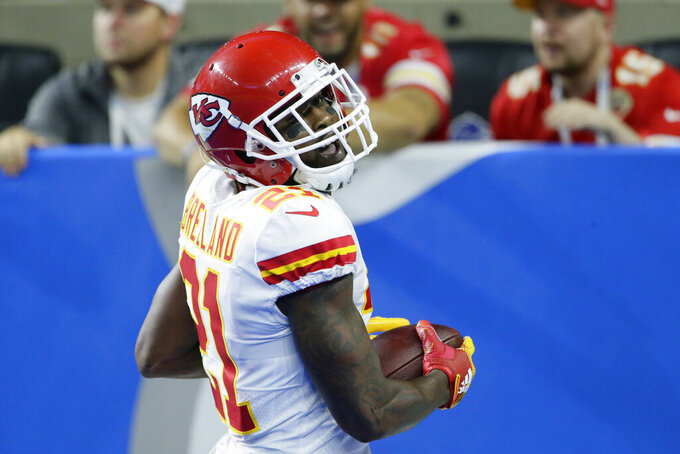 Kansas City Chiefs defensive back Bashaud Breeland crosses into the end zone, after recovering a fumble, for a 100-yard touchdown run during the second half of an NFL football game, Sunday, Sept. 29, 2019, in Detroit. (AP Photo/Duane Burleson)

The NFL has a quarterback problem and it's only getting worse by the week.

There are not very many people, among the world's billions, who are capable of playing the most important position in professional football well — and the number available to try keeps dwindling.

With Buffalo's Josh Allen and Chicago's Mitchell Trubisky, a pair of young first-round draft picks, both getting hurt Sunday, seven of the league's 32 teams, which works out to 22%, are without their preferred QB at the moment because of injury.

All of which raises two key questions:

At this rate, who's going to be left by the time the playoffs roll around?

What, if anything, can or should the NFL, or individual teams and coaches, do to better protect the guys who play quarterback and make the games watchable?

Allen was in the concussion protocol after he took a helmet-to-helmet hit from Jonathan Jones on a run at the start of the fourth quarter during the Bills' 16-10 loss to the New England Patriots.

"There's no room in football for that," Buffalo coach Sean McDermott said.

"I asked for an explanation," McDermott said. "I thought he should have been thrown out."

There was a flag on the play, but Jones was allowed to stay on the field because, as the NFL's head of officiating, Al Riveron, told a pool reporter, "we have standards for an ejection and this did not rise to that standard."

Which doesn't really clarify much. After all, didn't seem all that different from the hit to the head of Colts tight end Jack Doyle that got Oakland Raiders linebacker Vontaze Burfict kicked out of his team's 31-24 victory at Indianapolis.

Trubisky, meanwhile, went out with an injured left shoulder after getting dragged down while scrambling in the first quarter of the Bears' 16-6 win against the Minnesota Vikings.

He joins Drew Brees, Ben Roethlisberger, Cam Newton, Nick Foles and Andrew Luck — who retired at age 29 after dealing with a series of injuries — as QBs who teams have needed to replace this season.

Here are other top topics after the fourth Sunday of the NFL season:

The Washington Redskins keep changing quarterbacks — this time, it was first-round draft pick Dwayne Haskins throwing three interceptions after he replaced Case Keenum, who had one pick Sunday and five turnovers in Week 3 — and head coaches — how much longer does Jay Gruden keep the job? — but it is reasonable to wonder whether they will ever have success as long as owner Dan Snyder and his right-hand man, Bruce Allen, stay around. Washington is the NFC's only 0-4 club. The latest stumble was a 24-3 setback against the division rival New York Giants and their rookie QB, Daniel Jones. It's probably irresponsible to allow a clearly not ready Haskins to play right now, a situation made worse by the lack of help on offense, from the holdout of left tackle Trent Williams to the lack of experienced receivers to an inability to run. Making matters worse for the Redskins is what comes next: They host Bill Belichick, Tom Brady, the league's most daunting defense and the rest of the 4-0 New England Patriots in Week 5.

NO TDS FOR PAT; PLAY TO THE WHISTLE!

It's not often that reigning NFL MVP Patrick Mahomes is held without a touchdown pass. He threw for 50 last season, after all. But in a testament to Chiefs coach Andy Reid's ability to orchestrate an offense, Kansas City is now 3-0 during Mahomes' nascent career when their star QB fails to toss a TD, which happened in a 34-30 victory at Detroit. "In this league, it's not always going to be pretty," Mahomes said. His team was helped by cornerback Bashaud Breeland's 100-yard fumble return for a touchdown after Detroit's Kerryon Johnson lost the ball. The Lions eased up, violating the rule all kids are told in team sports every weekend across the land: Play to the whistle!

Things are not looking good for first-year Denver Broncos head coach Vic Fangio. What's going on? The Broncos are 0-4 and their defense is a disaster. Leonard Fournette, widely considered done last season, ran for 225 yards in Jacksonville's 26-24 win at Denver. Fournette hadn't run for 100 yards in a game since 2017, but three of the last four times an NFL running back topped 200 came against Denver.