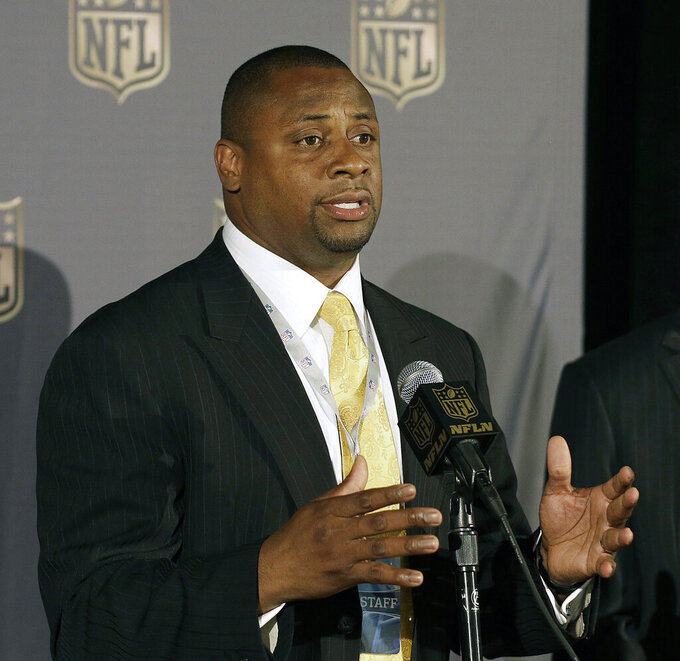 FILE - In this May 19, 2015, file photo, Troy Vincent, NFL executive vice president of football operations, speaks at the NFL's spring meetings in San Francisco. The NFL is launching a social justice platform, with an emphasis on education, economic development and community and police relations. Vincent emphasizes how much work has been done and continues to be done by the players. (AP Photo/Jeff Chiu, File)

NEW YORK (AP) — The NFL is launching a social justice platform, with an emphasis on education, economic development and community and police relations.

The platform is called Inspire Change and includes the funding of grass-roots organizations such as Big Brothers Big Sisters of America and Operation HOPE. It also will establish a digital learning curriculum for African-American history in 175 underserved high schools.

The league announced the initiative Friday in connection with its 32 teams and the Players Coalition, a group of players that works for social justice.

Inspire Change is the latest step for the league and the players after they established a working relationship in October 2017 following player demonstrations for social justice during the national anthem — a topic that drew attention from the White House.

"This launch involves new grants, new African-American history education programs in schools, grants with organizations we have not worked with before and who are doing the work on the ground, and PSAs on broadcasts beginning with this weekend's playoff games," says Anna Isaacson, the NFL's senior vice president of social responsibility.

"You have to really take the time to understand the topic, you can't just dive in. We really took the time to meet with and talk to advocates and community leaders and to decide the most important aspects to focus on under the broad social justice umbrella."

The league's financial commitment in 2018 was $8.5 million, plus an additional $2 million for NFL Foundation grants for clubs, former players and active players. For the 2019 fiscal year, that will increase to $12 million overall. But those figures don't include the funds raised collaboratively by clubs and players as part of the social justice matching funds program each club has established.

Former player and players association president Troy Vincent, now the league's pro football operations chief, emphasizes how much work has been done and continues to be done by the players. This week, he was told by Players Coalition co-founder Anquan Boldin that the NFL is still "on point" with its initiatives.

Vincent, who grew up outside Philadelphia, didn't understand the complexities of the incarceration rate and the bail system. He notes how opening of communication between the league office and teams and communities has helped steer the social justice movement.

"What we learned is that every community knew the grass roots organizations in their respective neighborhoods that were doing the work, the daily hands-on work," Vincent said. "Working with the larger organizations gave us a national view."

Two of those larger groups, BBBSA and Operation HOPE, will receive grants. Operation HOPE will use the funds to support its nationwide work within underserved communities to equip young people and adults with financial tools and education.

For Big Brothers Big Sisters, it's all about mentoring, and many players already serve in such a capacity.

"We are the ultimate grass roots organization," says Pam Iorio, president and CEO of Big Brothers Big Sisters of America, which has 257 agencies throughout the 50 states and has existed for 115 years. "We're all about strengthening communities one relationship at a time."

"We serve children from age 6 until young adulthood, and most of them come from very challenged backgrounds, whether family or economically challenged or neighborhood challenged."

Adds Isaacson: "If we can come in and help them through these initiatives, that is social justice."

"It all falls into social justice issues," Vincent said. "They're all broad and deep and unique to each community, but everyone wants fairness, due process and equal justice."