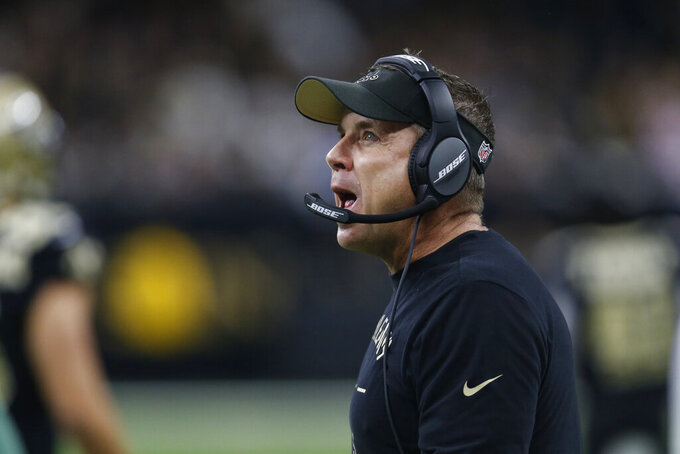 New Orleans Saints head coach Sean Payton looks up, during the first half at an NFL football game against the Carolina Panthers, Sunday, Nov. 24, 2019, in New Orleans. (AP Photo/Butch Dill)

Sean Payton responded to a grocery store butcher’s questioning of one of his play calls with a cutting retort about the quality of the meat behind the counter.

The New Orleans Saints coach says he was really trying to be lighthearted about it, but also felt compelled to explain his decision to call for a 2-point conversion that failed in the first quarter of a 48-46 loss to San Francisco last Sunday.

“I was kind of in where you are in the aisle, you have the produce here to the left, meats, I made a right and I’m heading for the coffee. I heard one of them say something about why I went for 2,” Payton recalled. “I kept walking to the dairy and I said, ‘I’m not letting this go. I’m turning around.’ And went back."

Payton made the unconventional decision after a personal foul had been called against the 49ers on tight end Jared Cook’s touchdown catch, giving the Saints the choice of trying a conversion from the 1-yard line or kicking off from mid-field after a regular extra-point kick.

Fans on talk radio focused on the call because it caused the Saints to try another 2-point conversion, which also failed, after a go-ahead touchdown in the final minutes. New Orleans wound up losing on a field goal as time expired.

Payton said the exchange in the grocery story “wasn’t negative.”

“I just said I would never do it that early, but when we get a penalty to be at the 1-yard line, that’s close,” Payton said. “He got it and then I gave him a hard time.

“I said some of these cuts don’t look real good to me. That was what happened. It was in jest."

Further explaining his thought process, Payton added: “I didn’t feel like kicking the touchback. I thought about kicking an onside kick. I felt really good about a couple of these 2-point plays that we had going into this plan, so at the 1-yard line I’m thinking we’re going to get 2 points.”

Payton said people seemed surprised to see him shopping at the grocery store near his home last Sunday night after the game.

“Yes, I shop for my dinner and go down the aisle with a cart like everyone else,” Payton said, noting he ended up having salad that night. “You get your stuff and watch games at home instead of going out. It was good.”

Broncos coach Vic Fangio isn't a fan of a 17-game schedule if that's what's in store for the NFL, but he is suggesting a radical redesign of the schedule and the setup.

Ever since the Houston Texans entered the league in 2002 and the NFL adopted its current format of four teams in four divisions in each conference, Fangio has been a proponent of something entirely different.

"My ideal suggestion, which has never been put forth in front of anybody important, I don't think there should be divisions," Fangio said. "I think you've got 16 (teams) in each conference. Everybody should play each other once. That's 15 games. Then if you want a 16th game, you play a natural rival from the other conference — Jets and Giants play every year, Eagles-Steelers, Texans-Cowboys, etc. — play every year."

Although that would produce an automatic imbalance, it would send the top six teams to the playoffs.

"I just don't think divisions are going to get you the best six every year," Fangio said. "You want the best six? Do it like they do in college. ... You play everybody once."

There's a big benefit to his idea, Fangio said.

"You'll avoid the problem that's going to happen this year where probably an 8-8 team is hosting a 12-4 team" in the playoffs," Fangio said. "You're going to get the six best teams in each conference. The divisions always float. There are some that are easy some years, some that have a bunch of good teams — that switches back and forth every couple years. I just think that'd be a good way to avoid it, but I'm not for 17 games. I think it should stay at 16."

Right now, Seattle (10-3) and Minnesota (9-4) aren't leading their respective divisions, while Dallas and Philadelphia are tied atop the NFC East at 6-7. The winner of the NFC East therefore will likely host a wild-card team with a better record come playoff time.

Even with the current setup, Fangio opposes adding a 17th game to the schedule.

"I just think 16 is more than enough. You can see some of these teams, us included to a degree, the injuries start to pile up. If they want an extra week of TV, give everybody two byes during the season," Fangio said.

One thing Fangio does favor is fewer preseason games: "Only down to three," he said. “You still need them. These young guys need them. Everybody says trade out a preseason game for a regular season game. The veterans don't play in those games, so it's not equal.”

The Cleveland Browns are giving back this holiday season.

This week alone, the team presented $100,000 for an initiative to keep kids in school and donated another $100,000 to provide affordable housing to families exiting homelessness who have been impacted by the criminal justice system.

While the school grant for the Cleveland Metropolitan School District was made in conjunction with the team’s foundation, the funding for the social justice initiative was funded by personal donations made by Browns players along with contributions from the team through its focus on supporting social justice causes.

Running back Kareem Hunt, who grew up in Cleveland, joined students for an afternoon of activities and lunch to support the “Get 2 School, Stay in the Game!” Network, an initiative designed to end chronic absenteeism.

With owner Dee Haslam as a member of the NFL’s player-owner social justice committee, the team has been at the forefront of providing education and economic help to families caught up in the criminal justice system.

“Everybody has to have a helping hand, regardless of your profession and regardless of what you do,” linebacker Christian Kirksey said. “We are all a community, we are all a city and everybody plays their part. With the Browns, everybody sees us on Sunday and sees us trying to score touchdowns, make tackles and win games, but we are also out in the community and trying to be a part of the people because at the end of the day, we are all people.”

As the Raiders prepare to play what is expected to be their final game at the Oakland Coliseum on Sunday, tributes have poured in from across the NFL.

Add Patriots coach Bill Belichick to the list of people who have special memories about the stadium.

“It’s a great environment," he said. “It’s a baseball stadium, so it’s configured that way — you don’t really see that much anymore. They’ve had some great games out there."

Belichick has a long history with the Coliseum, beginning when he was with the Broncos as an assistant special teams coach in 1978 at the height of what he recalled “a very intense rivalry.”

When he became a head coach, Belichick said he used to tell his players not to stand too close to him in case fans threw something in his direction and missed.

“There was the game and there were all the other aspects of the game,” Belichick said. “The Oakland crowd was a lot more intense than the LA crowd. ... Pretty intense fans. It’s like Halloween there every Sunday.”

The San Francisco 49ers are closing in on an impressive milestone off the field. The team has raised more than $49 million for the 49ers Foundation and expects to hit the $50 million mark this holiday season.

The foundation started in 1991 to help Bay Area youth in underserved communities. The team says it reaches nearly 100,000 kids each year through its EDU and PREP programs.

The EDU program uses football as a platform to engage students in kindergarten through eighth grade in STEAM programs for science, technology, engineering, arts and math.

The foundation also served Thanksgiving dinner to more than 300 people in need, raised nearly $150,000 for Bay Area youth through a holiday sports auction, and hosted more than 450 kids youth from local Bay Area nonprofits for the first Hope for the Holidays event, giving each of them toys, shoes, backpacks and a bike.

Peterson also needs just one touchdown run to tie Walter Payton for the fourth-most TD runs in league history with 110.

Last week, the 34-year-old Peterson joined Payton and Emmitt Smith as the only players with at least 14,000 yards rushing and 100 TD runs.