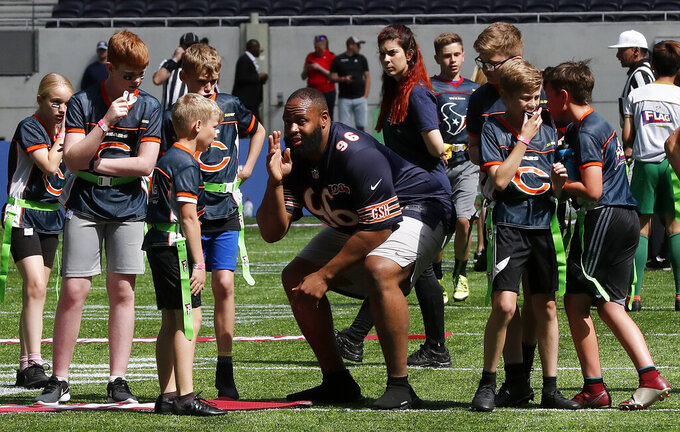 NFL Player Akiem Hicks of the Chicago Bears coaches a young team during the final tournament for the UK's NFL Flag Championship, featuring qualifying teams from around the country, at the Tottenham Hotspur Stadium in London, Wednesday, July 3, 2019. The new stadium will host its first two NFL London Games later this year when the Chicago Bears face the Oakland Raiders and the Carolina Panthers take on the Tampa Bay Buccaneers. (AP Photo/Frank Augstein) 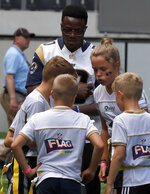 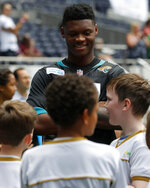 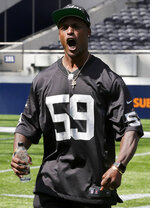 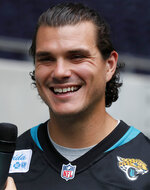 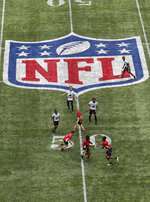 LONDON (AP) — For the past three years, the only way Sergei Starodoubtsev experienced the NFL was by watching highlights of JuJu Smith-Schuster and other players on Instagram.

That the 17-year-old found himself sharing a field with the Pittsburgh Steelers wide receiver — he was the one in workout clothes, not Smith-Schuster — was a little more than even he could comprehend.

"He's a different athlete and such an amazing player," Starodoubtsev said, awe-struck and struggling to find his words as Smith-Schuster addressed a group of fellow teenagers nearby. "I'm trying to succeed in this career and be on the big TV and play in the NFL and be in the same situation as JuJu."

At 6-foot-3 and 238 pounds with eye-catching quickness, Starodoubtsev is, in many ways, exactly what football coaches and recruiters across the United States desire. His only disadvantage? He lives in East London, where opportunities to play the American game are difficult to find.

That's why Starodoubtsev was at soccer power Tottenham Hotspur's new stadium earlier this month, one of 150 hopefuls trying to land one of 80 spots in the inaugural class of the NFL Academy this fall. The league, which has been playing regular-season games in London since 2007, wants to maintain a more lasting presence in the city beyond those few weekends a year. It believes it can do that — and grow the sport — by identifying and cultivating young British talent.

"In the last two or three years, this has been about, whilst being quintessentially American, could we be more British (and) locally relevant?" said NFL UK managing director Alistair Kirkwood. "(Can we) have grassroots and a commitment to having British players who look like you and talk like you, and then at the same time have younger kids playing the game right down to flag football?"

Players in the United States have a well-developed path to playing professional sports, progressing from youth leagues to high school and college. The setup in Europe differs significantly. It's far more common for prospects to join a sports club's academy at a young age and receive coaching in a structured environment all the way through to a senior-team debut.

Kirkwood wants to follow that model — with a twist. By partnering with Barnet & Southgate College in north London, those who have been selected to enroll in the NFL Academy will begin classes in September with up to 12 hours of football practice added on each week.

The initial enrollment will include boys ages 16-18. Kirkwood speculated about plans to target other age groups, and even girls, at other locations over time.

"I'd be taking over the world by now if I had this opportunity," said Carolina Panthers defensive end Efe Obada, who was raised in London, played in several local leagues and made his NFL debut last season. "For it to now be real, and to be getting kids who are 15, 16, introduced to the sport and having them surrounded by some major role models and real NFL players ... it's crazy. It's amazing."

More than 1,500 prospects applied for a spot in the academy, with 150 finalists drawn from that pool after two months of workouts and interviews. Those finalists, invited to join Obada, Smith-Schuster and other program ambassadors at Tottenham Hotspur Stadium, were put through a final round of combine-style workouts, including the 40-yard dash, the broad jump, the vertical leap and the 20-yard shuttle run.

Nearly half the participants were from London, the rest from other parts of Britain — a few traveled from elsewhere in Europe, including Poland's Kacper Jaszewski, who completed the fastest shuttle run in 4.3 seconds.

Tony Allen, who will serve as the academy's head coach, believes applicants' backgrounds aren't important as long as they show some degree of athletic ability. Starodoubtsev, for example, plays rugby. David Ani, a 16-year-old from Manchester who is already 6-foot-2, has a basketball background. Some said they are sprinters, a few play handball and one even said he plays water polo.

"I just don't think it's fair to bring in a kid with a rugby, soccer or cricket background and run them through positional drills because they're going to look like Bambi the first time around and be falling over the bags," said Allen, who was formerly the NFL's director of international player development and a coach with the London Monarchs of NFL Europe.

"I don't know where we'll start from. It could be, 'This is a center and this is a guard,' in all honesty, but we'll give them bespoke training, in class, film analysis, kind of fast-tracking them so that when they get on the field, they know what drills to do."

The finalists will be put through another round of character assessments before the initial class is decided in late July. Although Kirkwood and Allen both said they'd be pleased for the program's graduates to obtain Division I scholarship offers, the goal, for now, is personal development.

Still, nearly all who tried out harbor that NFL dream. Starodoubtsev, who thinks he'll be a defensive end, was reassured he'll have a place in the initial class once a coach saw him run the 40-yard dash in 4.85 seconds. Ani, who plays in a league in Manchester as a tight end, wants to be back at Tottenham Hotspur Stadium, which begins hosting NFL games in October.

"Hopefully, when I'm older, I'll be here," Ani said, gesturing toward the field. "I'll be here balling out for everybody."