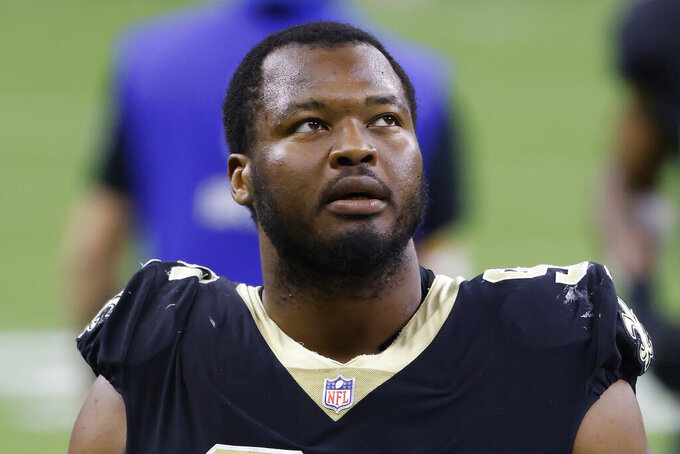 FILE - New Orleans Saints defensive tackle David Onyemata is shown after an NFL football game against the Atlanta Falcons in New Orleans, in this Sunday, Nov. 22, 2020, file photo. Saints starting defensive tackle David Onyemata has been been notified by the NFL he has tested positive for a banned substance and likely is facing a suspension, the player said in a social media post Friday morning, July 16, 2021. (AP Photo/Tyler Kaufman, File)

NEW ORLEANS (AP) — Saints starting defensive tackle David Onyemata has been given a six-game suspension after being notified by the NFL he tested positive for a banned substance and hand the player said in a social media post Friday morning.

In a statement from the NFL, the league said Onyemata had been suspended without pay for the first six games of the 2021 regular season for violating the NFL Policy on Performance-Enhancing Substances. He will be able to participate in all preseason practices and games.

The statement said Onyemata will be eligible to return to the Saints’ active roster on Oct. 26, following the team’s Week 7 game at Seattle.

Onyemata said on social media that he suspected the test result stemmed from his use of a supplement that he mistakenly believed was permissible under league rules.

“While I was certainly surprised and disappointed with this news, I am responsible for what I put in my body,” Onyemata wrote on his verified Instagram account. “As I have never knowingly taken anything that could cause a positive test, we are currently in the process of testing the supplements I was taking at the time of the test.

“Regardless, I am committed to being more aware of any medication and dietary supplements that may contain substances banned by the NFL,” he added.

In 2019, Onyemata was suspended one game in connection with a misdemeanor marijuana citation.

The Saints did not immediately comment on the test result or its implications for the 6-foot-4, 300-pound Onyemata, who had a career-best 6 1/2 sacks last season, his fifth in the NFL. Onyemata did not disclose the anticipated length

The Saints allowed one of their top interior lineman, Sheldon Rankins, to leave in free agency this offseason, and traded another, Malcom Brown, to Jacksonville. Now Onyemata's suspension could result in New Orleans opening the regular season against Green Bay on Sept. 12 without any of their top three interior defensive linemen from last season.