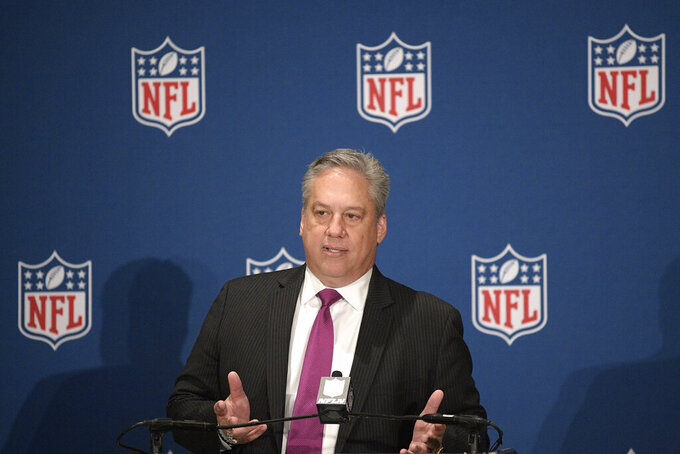 FILE - In this March 26, 2018, file photo, Al Riveron, NFL senior vice president of officiating, answers a question from a reporter during a news conference announcing rules changes at the NFL owners meetings in Orlando, Fla. Riveron, a Cuban who became the league's first Hispanic referee, is retiring Friday, Aug. 6, 2021. Riveron worked as an on-field official for nine years and became a member of the NFL's officiating staff in 2013. (Phelan M. Ebenhack/AP Images for NFL, File)

Riveron worked as an on-field official for nine years and became a member of the NFL's officiating staff in 2013 as a senior director.

He will be replaced by two of the league's senior vice president in officiating, Walter Anderson, a former referee, and Perry Fewell, a former coach.

“Al has been a tremendous advocate for officiating during his distinguished career," Troy Vincent, the NFL's executive vice president of football operations, said in a memo to staff. "We thank Al for his contributions to football and wish him all the best in his retirement.”

Riveron, 61, had a tough act to follow. Actually, two.

He succeeded Dean Blandino as head of officiating in 2017. Before Blandino, Mike Pereira held the job. Both are now with Fox Sports, and both were popular with fans and the media because of their forthrightness and skill explaining officiating decisions.

Riveron's personality featured a quiet determination, and he rarely was as open in discussing officiating calls as were Pereira and Blandino.

He also was plagued by the missed call at the end of the 2018 NFC championship game that basically cost the Saints an excellent chance to win and move into the Super Bowl. A pass interference and helmet-to-helmet hit were missed by the officiating crew late in the fourth quarter that could have allowed New Orleans to run down the clock and kick a winning field goal.

The Rams eventually won the game in overtime, and the NFL adopted more stringent replay and challenge rules on pass interference for the 2019 season. Those rules lasted only one season, not a good look for the league, before they were rescinded — in part because of the inconsistency of calls on pass interference under the new rule.

Anderson became an NFL referee in 1996 and remained on the field through 2019 before moving into the league office.

Fewell twice has been an interim head coach — with Buffalo in 2009 and Carolina two years ago. He joined the league officiating office in 2020.