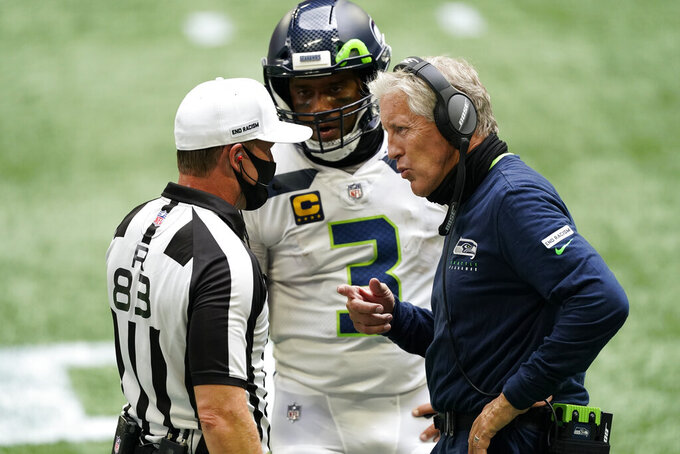 SEATTLE (AP) — When Bill Belichick replaced Pete Carroll as head coach in New England 20 years ago, neither could have guessed two decades later they'd be viewed as two of the better coaches during that span.

Yet here they are, leading their teams into Sunday night’s matchup between Belichick’s Patriots and Carroll’s Seattle Seahawks. It’s a prime-time showcase featuring two of the league’s premier franchises, directed by two of the league’s most respected coaches.

“You can’t sustain this long and be consistent and win a lot of games for this long unless you got your act together, your game, how you play this game, how it works and all,” Carroll said.

“Neither one of us are fly-by-night guys. There’s a real fundamental connection that we were raised right by the people we grew up under. But I do think also it’s a lot easier to stay with it when you win. It’s hard if you get your butt kicked week in, week out. Hard to hold onto your jobs and these opportunities.”

(For more in-depth coverage of the NFL, listen to the AP Pro Football Podcast apple.co/3iGiX8a )

They may be separated by 3,000 miles and have met in the regular season just twice since Carroll returned to the NFL in 2010. But the admiration is obvious for what each has accomplished in their tenures with their current teams.

And while that admiration was clear when their teams met in the Super Bowl nearly six years ago, it seems to have only grown since.

“You’re just trying to do a good job in the situation that you’re in. The fact that we’re still coaching and our paths are still crossing, I guess we’ve done pretty well or somebody would have replaced us,” Belichick said. “I have a ton of respect for all that Pete’s accomplished, both at Seattle, USC, and other places in his career as well.”

Sunday’s matchup between the 69-year-old Carroll and 68-year-old Belichick will bring together the two oldest coaches currently in the NFL and teams both seeking 2-0 starts after each had impressive debuts in Week 1. Seattle rode the arm of Russell Wilson in one of his best career games, throwing for 322 yards and four touchdowns in a 38-25 romp over Atlanta.

New England leaned on the legs of Cam Newton and a refreshed run game in a 21-11 win over Miami.

“Everybody’s talking about me and Cam. I’m thinking about coach Carroll and coach Belichick,” Wilson said. “Two of the oldest guys in the game 69 and 68. That’s the interesting matchup here.”

Jamal Adams was the best defensive player on the field in Week 1 for Seattle. In his debut with the Seahawks, Adams had a team-high 12 tackles, two tackles for loss and a sack. He was a disruptive force and managed to take some stress off middle linebacker Bobby Wagner.

The Patriots have seen plenty of Adams in recent seasons when he was with the New York Jets before his trade to Seattle.

“He kind of controls the middle of the field,” Belichick said.

It was no secret the Patriots would run the ball more from the quarterback position this season with Newton taking over for Tom Brady.

That was the case in their Week 1 win over Miami as Newton racked up 15 carries and a team-high 75 yards rushing. But offensive coordinator Josh McDaniels hinted the Patriots could vary their game plan against a Seahawks defense that presents a much different look.

“I know we did some things that we really haven’t done much of around here for a long time, or maybe ever,” McDaniels said. “We’re going to be in the same boat that we always are, which is we try to adjust appropriately, (and) change week to week based on what we think gives us the best chance to have success.”

Neither Folk nor Justin Rohrwasser, a fifth-round draft pick in April’s draft, began last week on the active roster after competing for the job in training camp. Instead, both spent the week on the practice squad before Folk was called up before the opener.

He went 3 for 3 on extra points in the win over the Dolphins, but also badly missed a 45-yard field goal attempt. He was sent back down to the practice squad after the game but signed to the active roster Wednesday.

One of the loudest venues in the NFL will be silent for Seattle’s home opener. No fans will be allowed in CenturyLink Field for at least the first three home games for the Seahawks. For a fan base that in the past has created seismic activity inside the stadium, it’s a significant absence for the home team.

For the second time in his career, Belichick will be coaching a football game just days after the death of a parent.