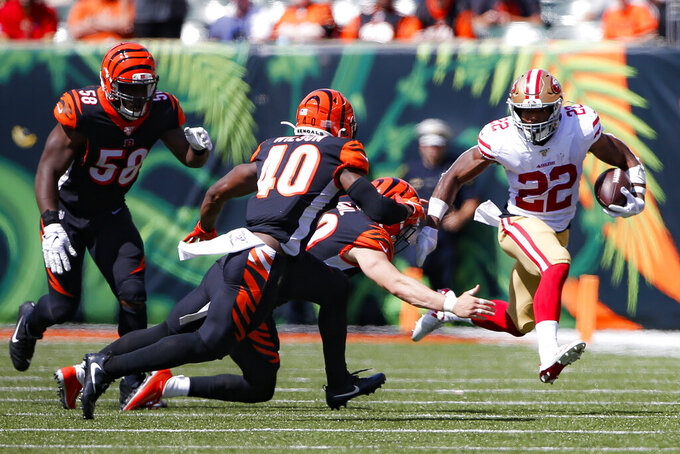 San Francisco 49ers running back Matt Breida (22) runs the ball during the first half an NFL football game against the Cincinnati Bengals, Sunday, Sept. 15, 2019, in Cincinnati. (AP Photo/Gary Landers)

CINCINNATI (AP) — Marquise Goodwin lined up in the slot on the right side of the line, took a few steps toward center as the ball was snapped, and then sprinted downfield.

No Bengals defender was anywhere near him.

Goodwin was so open for his 38-yard touchdown catch that Garoppolo acknowledged he was nervous when he let the pass fly, worried that he might miss an unguarded receiver.

And that was just the start of one of the Bengals' worst defensive days.

Cincinnati was gashed for 572 total yards — 259 on the ground — during a 41-17 loss to San Francisco, the most points a Bengals team has allowed in a home opener. One focus this week is rebuilding confidence heading into a game at Buffalo (2-0) on Sunday.

The Bengals (0-2) made it incredibly easy for the 49ers to run away. They repeatedly missed tackles and got caught out of position by San Francisco's misdirection. Cincinnati gave up an average of 8.4 yards per play. The 49ers had six plays of at least 36 yards, including a pair of touchdown passes .

"There is no gray," defensive coordinator Lou Anarumo said. "We screwed it up. It's not just the players; it's us coaches as well. This is a performance-based business and we did not perform at all (Sunday)."

The defense played solidly during a 21-20 opening loss at Seattle, containing the Seahawks' power run game. San Francisco's dual-back offense kept them off-balance, and defenders repeatedly missed chances to make tackles, leading to big plays. The 49ers had 19 plays of at least 10 yards.

By Anarumo's count, the defense gave up more than 160 yards because of missed tackles and another 100 yards on simple screen plays.

"Now, they had a good plan and all that — all credit to the Niners — but it's unacceptable," Anarumo said.

The Bills rushed for 128 yards in an opening win over the Jets and 151 against the Giants. They'll be facing a defense that has given up the third-most points after two games, trailing only the Dolphins and Giants. All three teams are 0-2.

The Bengals are on their fourth defensive coordinator in the past three years, learning yet another new system. The 49ers took full advantage of their unfamiliarity on Sunday with plays that froze them long enough to get a big gain. The Bengals also had trouble stopping the 49ers in short-yardage situations, giving up a 34-yard run on third-and-1.

"We're still a work in progress that way," Anarumo said.

Notes: Left tackle Cordy Glenn missed the first two games with a concussion and remains in protocol. Backup tackle Andre Smith suffered a groin injury Sunday and didn't practice Wednesday, but coach Zac Taylor was optimistic that he will be available to play in Buffalo. Left guard Michael Jordan also was held out of practice with an injured left knee. Taylor described him day to day. Tight end C.J. Uzomah was limited in practice with a foot injury. ... Taylor said receiver A.J. Green continues to make steady progress in recovering from ankle surgery, but there's still no target date for a return to practice. The Bengals hope to have him back by midseason.