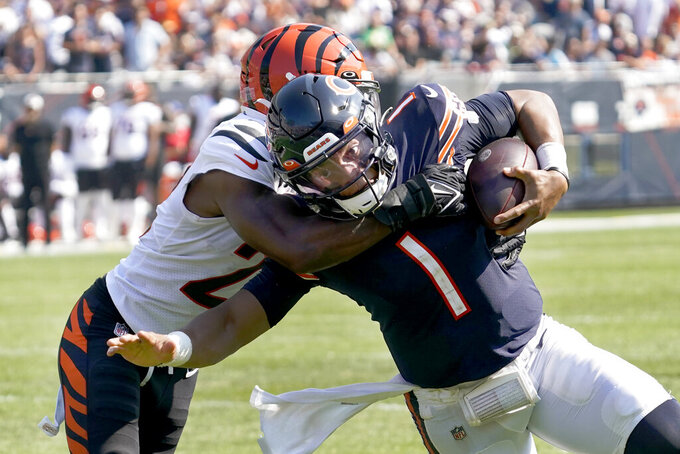 If it seems as if the Packers have transferred to the NFC West or the 49ers moved to the NFC North, blame the schedule makers at league headquarters.

When Green Bay (1-1) visits San Francisco (2-0) on Sunday, it will be the fourth trip to the Bay Area for the Cheeseheads in 22 months.

The Niners won the first two meetings in the 2019 regular season and the NFC title game. Green Bay won last year in the regular season.

This once was a great inter-division rivalry, particularly when the likes of Steve Young and Brett Favre were around. At one point, from 1995-2010, the Pack won 14 of 15 games.

“I think when you face a team twice in the playoffs, that’s always random, but they’ve been on our schedule the other two times. So, I feel like it’s almost been every year, I think every year but the first year,” 49ers coach Kyle Shanahan says. "Lambeau is a fun place to play. I’m glad that we haven’t had to go there in a while.

“It’s always a fun challenge when you go against one of the best quarterbacks to play and one of the best traditions. I know that Packers and 49ers go back a long ways. So, I think it’s really cool for the league and for our fans and their fans, when both teams are playing at high level.”

That quarterback, Aaron Rodgers, had a nice bounce-back game on Monday night at Detroit after one of his worst performances in a season-opening rout at the hands of the Saints. He's particularly eager to do well in Northern California, having grown up in Chico cheering for the Niners.

“I have so many great memories watching those great teams from the late ‘80s and early ’90s — before many of my teammates were born — and still have a lot of love and affection for the area,” he says. “Went to college there, still keep in touch with many folks from Cal that I got to meet or play with, and that area will always be special to me for sure.”

Week 3 began Thursday night with Carolina's 24-9 victory over Houston. The Panthers got another efficient performance from Sam Darnold, and their top-ranked defense put the squeeze on Texans rookie Davis Mills, sacking him four times. But Carolina (3-0) has serious concerns going forward because of a hamstring injury to star running back Christian McCaffrey.

A meeting of the two top-ranked college teams always draws nationwide attention. Well, this is a matchup of the AP Pro32's top two, the Bucs at No. 1.

Tom Brady, 44, is off to a brilliant start, leading the league with nine touchdown passes. But the Rams' defense is a difficult test for anyone, even a seven-time Super Bowl winner.

“I think he has a great grasp of it. That’s obvious. The way teams are trying to play us, he sees it early and they usually don’t break their pattern,” Arians says. “I mean, he didn’t know the plays last year. ... He knows them all now.”

The Rams have been just as dangerous in the passing game, with Cooper Kupp having two straight games with at least seven grabs for over 100 yards and a touchdown.

As if Las Vegas isn't lively enough, the town is going wild over the undefeated Raiders. The most recent time they were 3-0, they represented Oakland and went to the Super Bowl. After that, mostly dark times.

“I’m going to have a good time coaching. I like these players and I don’t give a damn about negativity," coach Jon Gruden says. "There’s enough of it in politics, in our social world right now, and we’re here to try to create a positive Las Vegas vibe and have some fun here. That’s what we’re doing.”

Miami is without quarterback Tua Tagovailoa (ribs) and Jacoby Brissett will start.

The Bills have won seven of the past eight meetings, with Washington’s only victory during that stretch in 2015 at home. Before that, the previous time Washington beat Buffalo was the Super Bowl following the 1991 season. That was the second of four consecutive Super Bowl losses for the Bills and Washington’s most recent championship. Washington has not won at Buffalo since 1987.

The camaraderie, emotional edge and coaching acumen of the Ravens was so evident last Sunday night when they rallied to beat Kansas City. They must stay at that level against a weaker opponent.

“I didn’t get on a high horse or anything and be like, `We just won a championship,’ or something,” quarterback Lamar Jackson says. “None of that has happened yet. We still have a long season ahead of us.”

Urban Meyer was a huge coaching success in college. Kliff Kingsbury had a so-so record.

Judging by the early returns in 2021, Meyer's move to Jacksonville has been a flop. Kingsbury, meanwhile, in his third pro season, has one of the NFL's most dynamic and exciting squads.

The Jags have lost their past 17 games and now face one of their nemeses. Former Houston receiver DeAndre Hopkins put up big numbers against the Jaguars when he played them twice a year: 79 receptions for 930 yards and six touchdowns in 14 games. He also won 10 of his past 12 games against the Jags.

Hard to believe the loser of this AFC West matchup will be last in the division.

The Chiefs fell 36-35 at Baltimore, blowing a late lead as Patrick Mahomes lost in September for the first time. It wasn't much his fault, though he threw the first pick of his career in the month.

Kansas City is allowing more than 200 yards per game on the ground, and LA has a versatile offense. How running back Austin Ekeler fares against the Chiefs could determine the winner.

One of several teams to make a huge turnaround in Week 2 — and it was not a pretty change for the Saints. After routing Green Bay, New Orleans fell apart against a budding defense in Carolina. After being pressured three times in Week 1, Jameis Winston was pressured 16 times last week, sacked four times and hit an additional six. Winston completed 11 of 22 passes for no TDs and two INTs.

One thing is certain: The Patriots won't be looking ahead to Tom Brady's return next week. Their coach won't allow it and probably hasn't allowed the players to even look at the October schedule.

Still, the Bengals are the Steelers' punching bag. Pittsburgh has won 14 of the past 16 meetings overall and five straight against the Bengals at Heinz Field.

An early meeting between the likely AFC South contenders, though the Colts are off to a miserable, injury-riddled beginning. They lost twice at home and head to Music City with bad vibes and probably without quarterback Carson Wentz.

Tennessee's comeback victory at Seattle last Sunday was exemplary. Having Derrick Henry toting the ball helped: The reigning Offensive Player of the Year ran for 182 yards and three touchdowns. He also rushed for 178 yards and three TDs in his previous game against the Colts, who are giving up 120.5 yards rushing a game.

Minnesota's two defeats came down to the final play, with mistakes hurting the Vikings, who have scored 57 points.

“They are scoring points and they are doing it well,” Seahawks coach Pete Carroll says. “The quarterback (Kirk Cousins) is throwing 72% completion right now with five touchdowns and zero picks, so that’s pretty darn good. That’s a big part of it, but their running game has been solid as well.”

Russell Wilson is 7-0 against Minnesota, whose leaky defense must watch out for Tyler Lockett. He had TD receptions of 69 yards in Week 1 and 63 yards in Week 2, one of six receivers in history with TD catches of 60 or more yards in each of the first two games of a season. No player has done so in three straight games out of the gate, and Wilson throws the best deep ball in football.

While the networks love having the Cowboys in prime time — they are scheduled for five appearances — it's Philly that has the form at night. The Eagles are 9-3 on Monday night since 2013 and 13-6 in prime-time games since 2017. They bring a staunch defense, but lost standout Brandon Graham to a torn Achilles tendon.

In the Cowboys' favor: The home team has won five consecutive games in the series, and these teams have played 11 times on Monday night, with Dallas holding a 7-4 edge.

When George Halas and Paul Brown were coaching these teams, it was a pro football highlight going back to 1951.

Now, the most interest could be on rookie Justin Fields starting at quarterback for Chicago with Andy Dalton injured. Fields played in the second half against Cincinnati and the No. 11 overall draft pick went 6 of 13 for 60 yards with a late interception that led to a touchdown. He added 31 yards rushing in the victory.

This could be the mismatch of the week as the Broncos continue their early easy ride; they have beaten the Giants and Jaguars thus far, both on the road. Denver ranks third overall on defense and has a healthy Von Miller threatening offenses again.

The Jets have lost 11 straight games in the month of September and are 0-2 for the third consecutive season. Rookie QB Zach Wilson comes off a four-interception game vs. New England.

The only matchup of winless teams, with the Falcons a sieve on defense, the Giants inconsistent on both sides of the ball.

Atlanta's Arthur Smith is looking for his first win as an NFL head coach. It took Giants coach Joe Judge six games to get his as a first-time head coach last year.