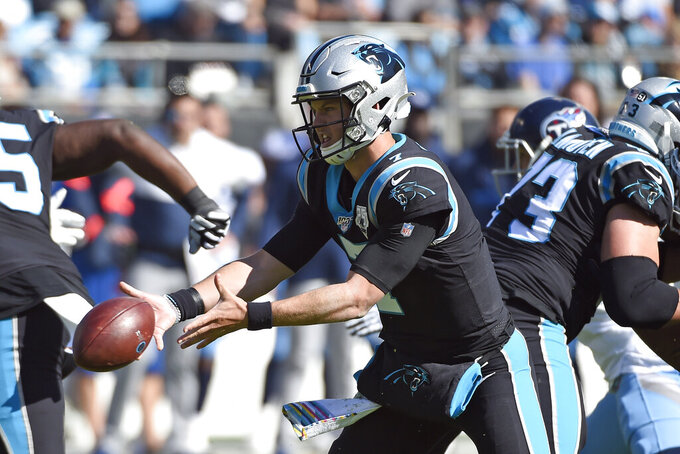 Carolina Panthers quarterback Kyle Allen tosses the ball during the first half of an NFL football game against the Tennessee Titans in Charlotte, N.C., Sunday, Nov. 3, 2019. (AP Photo/Mike McCarn)

CHARLOTTE, N.C. (AP) — If coach Ron Rivera had any concerns about how Kyle Allen would respond after throwing three interceptions and suffering his first career loss as an NFL starter, the Panthers' second-year quarterback answered them last week in practice.

Rivera watched Allen intently and noticed his confidence shining through.

The ninth-year head coach knew right then that Allen would be just fine Sunday against Tennessee.

Allen showed poise in the pocket and confidence in his throws, completing 17 of 32 passes for 232 yards and two touchdowns in a 30-20 victory over the Titans on Sunday that helped erase the sour taste of a 38-point loss to the unbeaten 49ers the previous week.

"It doesn't seem like a lot of things faze him," Rivera said. "He had a good week of practice. I don't think (the loss) fazed him at all."

With the win, Allen improved to 5-1 as Carolina's starting quarterback.

It appears Allen will continue to be the starter for the foreseeable future, with no change in Cam Newton's injury status.

"Obviously last week's loss was embarrassing and it wasn't what we wanted to do, but we understand how talented we are when we do the right things, when we don't hurt ourselves and when we play clean football," Allen said. "So this was huge and I think you felt that sense of urgency from everyone. I think you could see it in people's eyes when we walked out in pregame today. It was a really big win for us."

Christian McCaffrey heard chants of "MVP! MVP!" from the home crowd after scoring his third touchdown against the Titans, giving him 166 yards from scrimmage on the day. The third-year running back is in the hunt, leading the NFL with 1,244 yards from scrimmage and 13 touchdowns midway through the season.

McCaffrey didn't play the final 10½ minutes of the game after landing on his head at the end of the touchdown run. McCaffrey was checked for a concussion but was cleared to return.

However, Rivera decided against putting him back in, saying he wanted to be smart with the Panthers up 16 points. McCaffrey is expected to play next week at Green Bay.

Cam Newton's foot. The 2015 league MVP just can't seem to get healthy. Newton has missed the last six games and there is no sign he will be ready to play any time soon.

The Panthers have not made the decision to put him on injured reserve, instead keeping a roster spot for him even though there is no guarantee when or if he will return. Newton got a second opinion last week on his mid-foot sprain, but the diagnosis wasn't much different from the previous one. Basically, he needs to continue to rehab and give the foot time to heal.

"Riverboat" Rivera left it on the line Sunday and both of his gambles paid huge dividends. In the first quarter, Rivera went for it on fourth-and-2 from the Titans 7, and the result was a 7-yard touchdown pass from Allen to McCaffrey. In the third quarter, Rivera helped his team regain momentum after a Titans touchdown by successfully calling for a fake punt on fourth-and-4 from his 36. That led to a Carolina touchdown and a 24-7 lead.

Where has tight end Ian Thomas been all season? Thomas' reps have shrunk in his second season and he has yet to catch a pass. This comes after a rookie season when he showed promise, catching 36 passes for 333 yards and two touchdowns.

Cornerback James Bradberry injured his groin during the game against the Titans and missed the last few minutes. His status for Green Bay remains uncertain. If Bradberry can't go, then Ross Cockrell will start opposite Donte Jackson.

The Panthers are 5-3 at the midway point of the season despite playing six games without Newton. The second half of the schedule includes some difficult games beginning with Sunday's NFC showdown at Green Bay (7-2). The Panthers also must play the Saints (7-1) twice, Seahawks (7-2) and Colts (5-3). On the flip side, they play two games against the Falcons (1-7) and one against the Redskins (1-8).