Pats offense could look similar, even if QB Jones returns 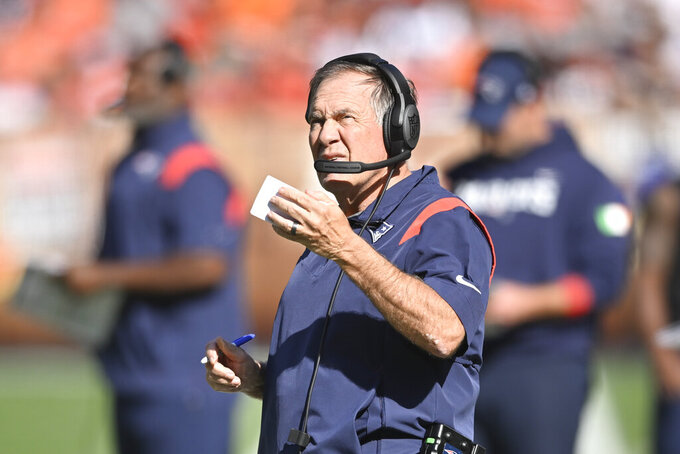 New England Patriots head coach Bill Belichick watches as his team plays against the Cleveland Browns during the second half of an NFL football game, Sunday, Oct. 16, 2022, in Cleveland. (AP Photo/David Richard)

FOXBOROUGH, Mass. (AP) — Plenty has changed for the New England Patriots offense in the three weeks since Mac Jones took his most recent snap at quarterback.

Two other players have had a chance to lead it. One of them, Brian Hoyer, joined Jones on the sideline following a concussion. And the other, rookie Bailey Zappe, has been one of the biggest surprises of the young season going 2-0 as the starter.

Zappe’s success hasn’t created a legitimate controversy, with Jones possibly healthy enough to return Monday night against Chicago from the ankle injury he suffered late in the Week 3 loss to Baltimore.

“I think it feels pretty good,” Jones said. “Just trying to work through all the stuff being able to play in an NFL football game. I want to be able to go out there and help the team. Once I’m there, I’m there.”

He was listed as questionable after participating on a limited basis in each of the team’s practices this week. It necessitated some adjustments as the coaching staff prepared for the potential of Jones or Zappe starting.

But coach Bill Belichick downplayed the significance of the changes they’ve had to make, even with Jones’ return an increased possibility.

“I wouldn’t say two different plans. No,” Belichick said. “There’s always players in a situation where there’s some uncertainty about their availability. That’s the way it is every single week. So depending on who those players are, what the plays are, what we’re talking about, they’re all kind of a little bit different. But we’ll manage them the best we can.”

But if Jones is back in the lineup Monday, he will likely be leading a unit that will continue to employ some of the wrinkles that have made Zappe a success over the past two weeks.

In the three games before his injury, Jones completed 66% of his passes for 786 yards and two touchdowns. Zappe has thrown 70 passes in the three games he’s played (two starts), but is completing 73% and has four TDs.

One of the biggest reasons are the kind of passes they have attempted. Under Jones the offense took more chances downfield, with an average depth of 10.3 yards for Jones’ receivers. That compares with a much safer 6.5-yard average for Zappe’s targets.

In addition, the running game has had more of an emphasis, with the Patriots averaging 147 yards in the three games Zappe has played. It was 115 yards per game under Jones.

The increased effectiveness in the run game has opened the play-action pass for Zappe, who has used it on more than a third of his drop-backs, compared to 10% on Jones’ pass attempts.

It’s a tool that Zappe acknowledged he’s still getting used to.

“Definitely have learned a lot in that aspect,” Zappe said. “That’s something I never really did in college or high school, so when I came here it was kind of a little new world for me. But learning those things that’s something I had to do to be in this position and be in this league.”

Having balance will be important Monday against a Bears defense that ranks third in the NFL, allowing only 178.7 passing yards per game.

New England is also expected to have both of its top two rushers back this week with Damien Harris no longer listed on the injury report with the hamstring injury that kept him out against Cleveland last week.

Whatever happens Monday, Jones said he’s benefited from his time as an observer and has enjoyed helping do what he can to help Zappe flourish. Jones expects that to continue whether he’s back on the field or not on Monday.

“I’ve been in these types of situations before, whether that’s in college or not,” Jones said. “When you’re in, you’re in and you want to have everyone helping you. He’s done a good job stepping up being a young guy. I’ve always had really good mentors and things like that. So that’s my plan.”