Pitch and catch: Round 2 of NFL draft heavy on receivers 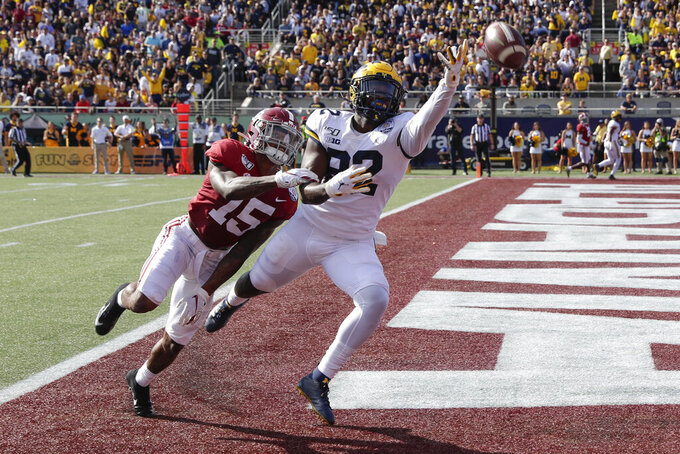 FILE - In this Jan. 1, 2020, file photo, Alabama defensive back Xavier McKinney (15) breaks up a pass intended for Michigan tight end Nick Eubanks during the first half of the Citrus Bowl NCAA college football game in Orlando, Fla. McKinney was chosen by the New York Giants in the second round of the NFL football draft Friday, April 24, 2020. (AP Photo/John Raoux, File)

While only one quarterback, Oklahoma's Jalen Hurts, was taken on the second day of the NFL draft Friday, the guys who haul in passes were everywhere.

Starting with the top two selections on Day 2 — Clemson's Tee Higgins to Cincinnati and Southern California's Michael Pittman to Indianapolis — seven wideouts were drafted in the second round. Add that to the six who went in the opening session, and it set an NFL record through two rounds.

Three more receivers were selected in the third round — were teams running out of prospects?

"It doesn’t matter who your quarterback is, you want him to have as many weapons as possible,” Bengals coach Zac Taylor said. “A lot of great offenses have those weapons at their disposal.”

Yep, the NFL these days is built on passing offenses. This draft is loaded with outstanding pass catchers. Many teams had both Higgins and Pittman rated as top-32 talent.

So Cincinnati held firm atop the second round by grabbing Higgins to catch Joe Burrow’s passes. The pair worked out together heading toward the draft.

“I actually model my game after him,” Higgins said. “Man, it’s crazy. I was just talking about this to my good friend — I could end up with the Bengals and be his teammate one day. Now that this moment is here, it’s surreal.”

In addition to finding what they hope will be their franchise quarterback in LSU's Burrow with the first overall pick, the Bengals (2-14 last season) added a threat who can make the spectacular reception.

Pittman takes his 6-foot-4, 224-pound frame to Indianapolis. The Colts had no first-rounder, and they quickly gave new quarterback Philip Rivers a target in Pittman, whose father also played in the NFL.

“I think they brought me in to make an impact right now and they have Philip Rivers, who I think is a Hall of Famer," Pittman said. "I’m happy I get to start with like a Hall of Fame quarterback.”

Hurts wound up in Philadelphia, which has an established QB in Carson Wentz. But the Eagles envision using Hurts, who was at Alabama before being beaten out as starter by Tua Tagolvailoa.

“We're always going to be about the QB position," Eagles draft boss Howie Roseman said. “It’s the most important position in sports. ... We think Jalen is an incredible teammate.

“We believe Carson will lead us to our next championship. ... We are quarterback developers.”

So is the SEC, which, truthfully, develops every type of player. Through 106 selections, 40 came from that conference — far more than the previous high. Indeed, 40 for a conference through four rounds was the previous record.

Two positions barely or not addressed at all in the first round got some attention directly after Higgins and Pittman were selected. Georgia's D'Andre Swift became the second running back chosen, by Detroit. LSU's Clyde Edwards-Helaire was the only RB who went in the opening round, last to Super Bowl champions Kansas City.

Swift is a dynamic playmaker unlike anyone the Lions have had in the backfield in years — maybe since Hall of Famer Barry Sanders, who retired in 1998.

Four more running backs went in the round.

Safety was ignored on Thursday, but immediately was addressed by the Giants in Round 2 with Alabama's Xavier McKinney. New York's secondary has been a sieve.

“He also has that ability to be a quarterback on the back end, a signal caller for the defense,” coach Joe Judge said. "He fits the mold of a smart, tough, fundamentally sound guy we are looking to build with.”

New England finally surfaced with the 37th overall spot after trading out of the first round. Coach Bill Belichick was nowhere in sight — his dog appeared to be manning his laptop — as the Patriots chose Kyle Dugger, a safety from Division II Lenoir-Rhyne. Dugger not only was the first player not in FBS to be selected, but only the second from a non-Power Five conference. Utah State quarterback Jordan Love, who went 26th overall to Green Bay, was the other.

After a record 15 of the 32 players in the first round came from the Southeastern Conference, another 10 SEC players came off the board in Round 2. And that’s not including Hurts, who transferred to the Big 12 for his final season.

— Chicago adding a 10th tight end to its roster in Cole Kmet of Notre Dame;

— Another Irish player, wideout Chase Claypool, a Canadian, to Pittsburgh;

— Florida State's Cam Akers to the Rams, who had released their standout running back, Todd Gurley last month, with Gurley surfacing in Atlanta;

— Buffalo adding to an already solid defense with Iowa end A.J. Epenesa, one of the Big Ten’s outstanding defenders.