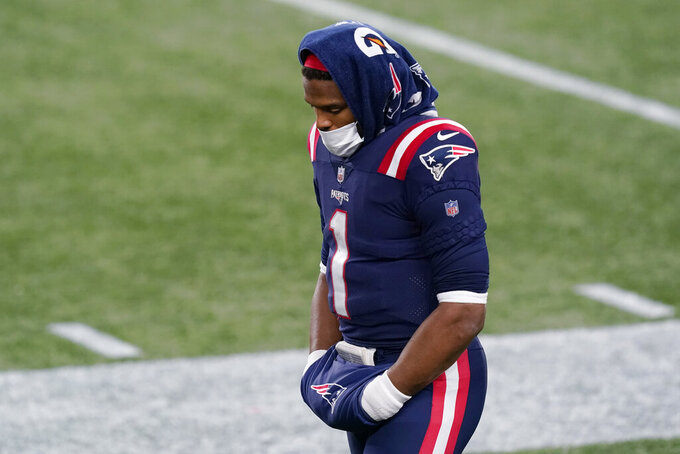 New England Patriots quarterback Cam Newton stands on the sideline in the second half of an NFL football game against the Buffalo Bills, Monday, Dec. 28, 2020, in Foxborough, Mass. (AP Photo/Elise Amendola)

FOXBOROUGH, Mass. (AP) — For most of Bill Belichick’s New England coaching tenure, the final week of the regular season has been a time to rest and tune up for the playoffs.

In yet another sign of what has been a disorienting 2020, the Patriots trudge into the final week of the regular season with nothing left to play for but pride following a 38-9 loss to the Bills on Monday night.

With an offseason looming that promises a multitude of changes, the only remaining question is whether Belichick will bench quarterback Cam Newton in favor of backup Jarrett Stidham in Sunday's finale against the Jets.

Newton finished 5 of 10 for 34 yards passing on Monday night before being pulled in the third quarter for Stidham. Newton’s 34 yards passing were the fewest by a Patriots starting quarterback since 1993.

He said after the game that the most frustrating part of this season has been that the extra time he’s put into preparing hasn’t paid off.

“It’s extremely frustrating, knowing what you’re capable of, having belief in yourself, it’s just not showing when it counts the most,” Newton said.

“I try to be the best teammate I can possibly be. That’s what I will continue to do. I will keep getting better each and every week, getting more comfortable in this offense for the last week that I possibly can. Let’s see where it gets me.”

Belichick acknowledged the passing game’s shortcomings against the Bills and that he chose to insert Stidham because of the offense’s ineffectiveness. But he also said Newton wasn’t the source of the problems and brushed off a question about who will be the starter next week.

For his part, offensive coordinator Josh McDaniels reiterated Tuesday that, results aside, he doesn’t think Newton’s work ethic has been an issue.

“He gives us everything he’s got,” McDaniels said. “There’s nothing else I could ask for as a coach. Have there been mistakes made? Yeah, that’s across the board. There’s no question about it. Our whole group we need better from. ... But as far as Cam Newton is concerned, he’s obviously earned the respect of this entire building.”

In a sign of what kind of season it’s been, punter Jake Bailey had one of the best performances of the game for the Patriots. Bailey, who was selected to his first Pro Bowl last week, had a 62-yard punt in the first quarter. He is averaging 46.1 net yards per punt, which leads the NFL.

Injuries on defense caught up to New England in a big way. Down two of their top tacklers in defensive lineman Lawrence Guy and linebacker Ja’Whaun Bentley (both sidelined with shoulder issues) the defense had its poorest showing of 2020, allowing a season-worst 474 yards.

Kicker Nick Folk extended his made field goal streak to 26 with a 45-yarder in the first quarter. After missing his first two field goals of the 2020 season, Folk has not missed since. It is the second-longest field goal streak in team history behind Stephen Gostkowski’s 31.

With cornerback Stephon Gilmore out for the season, J.C. Jackson was tasked with the primary coverage of Bills star receiver Stefon Diggs. Jackson, who leads the team with eight interceptions, entered the game having only allowed three touchdowns all season. He held his own opposite Diggs early, but gave up two of Josh Allen’s three TD passes to Diggs over the final three quarters.

19 — The Patriots’ NFL-record run of consecutive seasons without being swept by a division foe that came to an end. The Jets and Dolphins last did it in 2000. The Bills hadn’t swept the Patriots since 1999.

At a minimum, how the Patriots approach this week will offer at least a peek at what kind of offseason it will be. Cornerback Jason McCourty, who will be entering free agency, said he is already anticipating a lot of roster turnover.