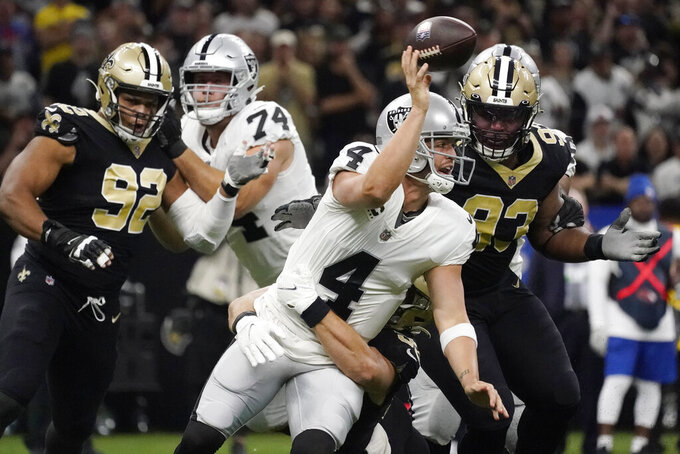 That might have been the Raiders’ best chance to get anything going on a miserable afternoon for Carr and coach Josh McDaniels.

Carr never guided Las Vegas across midfield before being pulled with 3:33 left in the Raiders’ 24-0 loss to the Saints. He was sacked three times and finished 15 of 26 for 101 yards — the lowest output of his nine-year career for a game he did not leave early with an injury.

“This is embarrassing,” he said. “We can’t have that. That should never happen, especially with the group of guys in that locker room. We are so much better than that.”

The Raiders (2-5) hired McDaniels, Tom Brady’s offensive coordinator for 11 years in two stints with the New England Patriots, in January in part to get the most out of Carr, the franchise’s career leader in yards passing, completions and touchdowns.

Despite those numbers, the Raiders reached the playoffs for only the second time with Carr last season, losing at Cincinnati in the wild-card round.

The McDaniels-Carr marriage has not produced results yet. After losing four of their first six games by a total of 14 points, the Raiders hit bottom in the Big Easy.

It was the first time Carr has been shut out since a 51-0 loss to the then-St. Louis Rams during his rookie year. The Saints (3-5), who had allowed the second-most points per game (28.6) in the NFL, blanked an opponent at home for the first time since 2012.

“There was a litany of things,” McDaniels said. “They mixed their coverages up pretty well. It wasn’t all just zone or Cover 2 or anything like that. They challenged us today. When you are behind the sticks as we were a number of times, they can pin their ears back and rush.”

Carr did not get much help.

Josh Jacobs, who had rushed for more than 140 yards in each of the past three games, managed just 43 on 10 carries while the Raiders chased a mounting deficit.

Wide receiver Davante Adams, who was ill, caught one pass for 3 yards while being targeted five times. Tight end Darren Waller, who caught 12 passes for 105 yards and a touchdown against the Saints two years ago, missed his second consecutive game with a hamstring injury.

The Raiders reached their own 48 on their second possession before a false start penalty, a Carr pass under pressure that hit an offensive lineman in the back and another throw under duress that was nowhere close to a receiver.

After New Orleans went ahead 7-0 on Alvin Kamara’s 3-yard touchdown run with 1:36 left in the first quarter, Matthias Farley lost 3 yards on a fake punt from the Las Vegas 45 that McDaniels called one play after Adams was stuffed on an end-around on third-and-1.

“There’s always an opportunity to do that in the kicking game depending on the look,” McDaniels said. “Most teams are doing that nowadays. Obviously it didn’t work out in our favor. It comes down to execution, and they obviously did a better job than we did."

That failure set up a Saints field goal, and Carr threw an interception at the Raiders 45 on the next series, leading to another Kamara touchdown. His pass to Hunter Renfrow was deflected by linebacker Pete Werner and caught by safety Tyrann Mathieu.

“I was waiting on the window and tried to sneak it behind the guy, and (Werner) got his hands on it and tipped it,” Carr said. “There are so many things that happened. I’m not worried.”

Kamara’s third touchdown on the Saints' opening drive of the second half accounted for the final margin.

The Raiders will have plenty of time to think about their issues away from home. Instead of returning to Las Vegas, they are flying to Jacksonville and will spend a week in Florida before playing the Jaguars next Sunday.

“One thing I know about our team is we’ve responded the right every time there’s been challenges,” Carr said. “We have a great opportunity to be together all week. We’ll see what we can do. It’s going to be an amazing challenge to see how we respond.”