Raiders finale in Oakland about nostalgia not playoffs 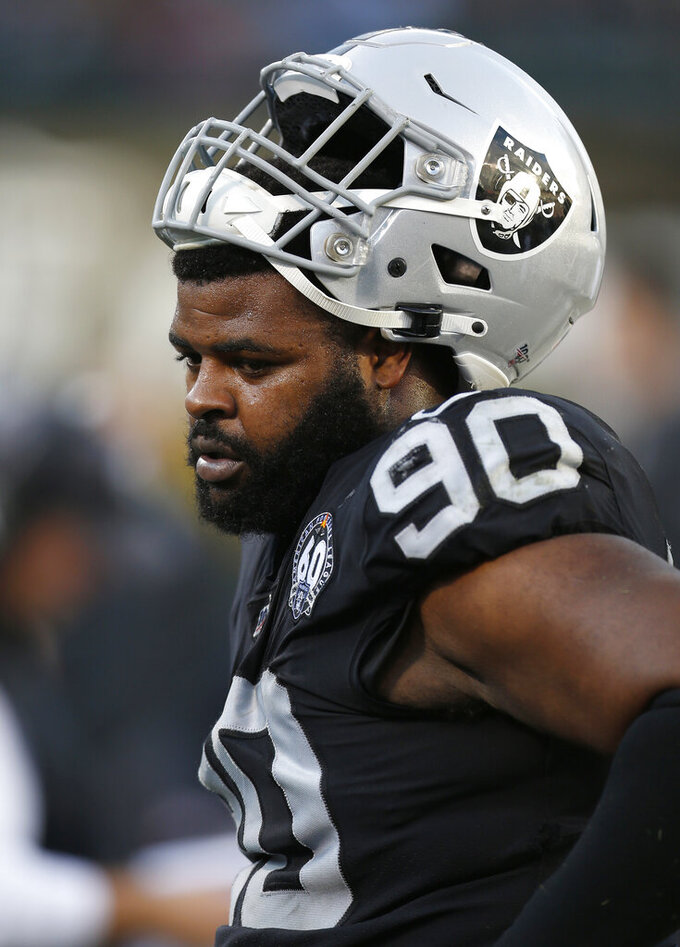 Oakland Raiders defensive tackle Johnathan Hankins (90) reacts on the sideline during the second half of an NFL football game against the Tennessee Titans in Oakland, Calif., Sunday, Dec. 8, 2019. (AP Photo/D. Ross Cameron)

ALAMEDA, Calif. (AP) — Three straight lopsided losses means the finale at the Oakland Coliseum will be all about nostalgia instead of a playoff run.

The Raiders were all but eliminated from postseason contention when they fell 42-21 to the Tennessee Titans for their franchise record-tying third straight loss by at least 21 points.

Oakland (6-7) is two games out of a playoff spot with three games remaining and needs to win all three and hope Pittsburgh and either Houston or Tennessee loses all three games to have a shot at the postseason.

With that seeming like an extremely remote possibility, the focus instead will be on the goodbye to Oakland. The Raiders will play their home finale against Jacksonville on Sunday before finishing the season with two straight on the road.

The Raiders are set to move to Las Vegas next season after spending the past 25 years in Oakland.

The first-half offense. The Raiders moved the ball with relative ease during the first half, scoring touchdowns on three of their four possessions. DeAndre Washington capitalized on a short field following a long interception return by Maurice Hurst by running 14 yards for a score, then Carr connected on TD passes of 49 yards to Rico Gafford and 1 yard to Foster Moreau.

Defense. Coordinator Paul Guenther's unit once again had no answer, allowing 552 yards and generating no sacks for the game. Ryan Tannehill threw for 391 yards and three scores, Derrick Henry ran for 103 yards and two TDs, and the defense allowed 9.36 yards per play for the franchise's third-worst mark since the 1970 merger.

"They did what they wanted to do," defensive tackle Hurst said. "We gave up way too many explosives plays. We weren't stopping the run the way we should have. It's an embarrassing three weeks."

Punter A.J. Cole. On a day little went right, Oakland's rookie punter had a strong showing. Four of his five punts pinned the Titans inside the 20, leading to drives starting on the 9, 6, 11 and 16. It wasn't Cole's fault that the Raiders defense failed to capitalize, allowing the Titans to drive for TDs following three of those four effective punts.

"It's like getting punched in the stomach," Gruden said. "It knocks the wind out of you."

DE Clelin Ferrell. The fourth overall draft pick once again failed to make a big impact. He did have two quarterback hits, marking just the third game this season he has hit the quarterback. But Ferrell has gone four straight games without a sack and almost all of his production came when he had 2 1/2 sacks against the Chargers on Nov. 7 when Los Angeles had backups at both tackle positions.

TE Moreau will need season-ending knee surgery. Gruden had no update on the status of RB Josh Jacobs (shoulder) and RT Trent Brown (pectoral), who both missed the game against the Titans. WR Hunter Renfrow (ribs) will miss at least another week.

The Raiders host the Jaguars on Sunday and say good-bye to the Black Hole.