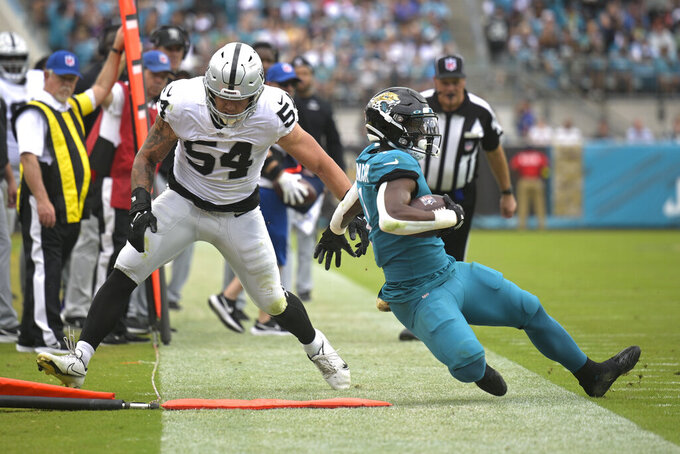 The team announced the moves Thursday.

Waller has missed the past three games with a hamstring injury, and Renfrow has been dealing with rib and hamstring injuries. Each will sit out at least the next four games.

“It's cold, but the next guy's up,” receiver Mack Hollins said. “Practice didn't stop. Meetings didn't stop. Realistically, nothing's stopped or even slowed down, and that's the unfortunate truth about this business. There's always going to be somebody else to fill the gap. You'll never be missed as much as you think you will, and it's unfortunate.

“But we'll be ready when those guys are healthy and back. I'm excited to have them back, but until then everybody else will step up and fill the void and continue on with what we're doing.”

“At the end of the day, the reality is if you come back too quickly from one of these, you usually end up out longer,” McDaniels said. “So we’re just trying to let his body tell us when the right time is, and hopefully that’s sooner rather than later. But we just can’t do it magically, snap our fingers and make it go away.”

Like Waller, Renfrow has seen a decline this season with 21 receptions for 192 yards and no TDs. Last season, he caught 103 passes for 1,038 yards and nine touchdowns.

Also, linebacker Blake Martinez announced he was retiring after seven seasons. He was in his first year in Las Vegas and had 20 tackles. Martinez had 706 tackles during a career that included stints with Green Bay and the New York Giants.

“I have chosen to step away from this career at this time to focus on my family and future passions!" Martinez posted on Instagram. "I am excited for this new journey and appreciate all the fans and organizations that have supported me throughout the years!”