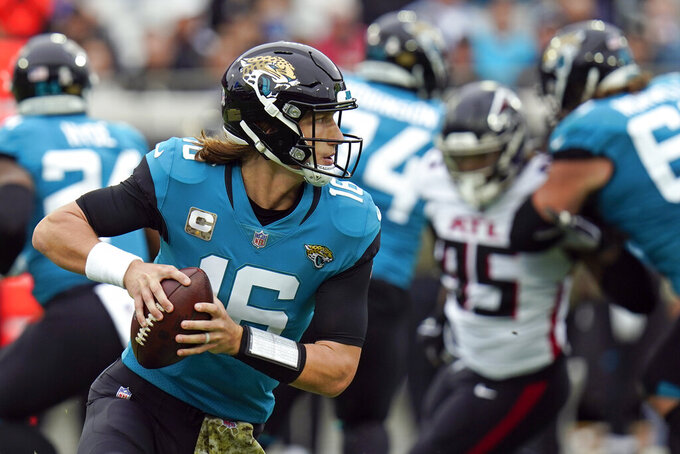 Jacksonville Jaguars quarterback Trevor Lawrence (16) looks for a receiver against the Atlanta Falcons during the first half of an NFL football game, Sunday, Nov. 28, 2021, in Jacksonville, Fla. (AP Photo/Chris O'Meara)

INGLEWOOD, Calif. (AP) — The Los Angeles Rams faced one of the NFL's worst teams at home in December last season. The New York Jets left SoFi Stadium with their first victory, and the Rams were left with the most embarrassing loss of coach Sean McVay's career.

So there's no way Los Angeles (7-4) could take Sunday's visit from the struggling Jacksonville Jaguars (2-9) lightly — even if the Rams' own three-game losing streak didn't already confirm they're capable of losing to anybody these days.

“You don’t want to minimize the things that have occurred, but ... these opportunities present a rare opportunity to really learn about people, and you almost appreciate them even more,” Rams coach Sean McVay said. “Are we disappointed? Does it sting what has gone on? Absolutely. Those are real emotions, but what we’re not going to do is just sit there with our head down and not get ourselves ready to prepare for that next opportunity.”

Los Angeles' audacious additions haven't gone as planned yet: With three losses sandwiched around their bye week, the Rams have put their playoff standing in jeopardy heading down the stretch.

They've still got the Jaguars' respect, even when long stretches of their recent play haven't demanded it.

“It’s going to be hard to find another defense that has more talent, but every week teams have great players,” Jags quarterback Trevor Lawrence said. “There’s just a lot of them on this team, but it doesn’t change the mindset.”

That 23-20 victory by the Jets in Inglewood last season was also a huge moment for the Jaguars: They ended up with the No. 1 pick in the draft because of the Jets’ late-season surge, and they used it on Lawrence.

Even without the Rams’ shaky history from last year’s loss to the Jets, this game would loom as a chance to show progress in the Jaguars’ rebuilding effort under Meyer and Lawrence. If the Jaguars take an optimistic view of their second West Coast trip of the season, they'll see an opponent with a defense that has declined significantly from its 2020 dominance playing alongside an offense that has regressed markedly in the last three weeks.

Jacksonville might be last in the NFL with six takeaways, but Matthew Stafford has been exceptionally mistake-prone in the last three weeks, committing six turnovers by himself — including an interception returned for a pick-6 in each Los Angeles loss.

“The best thing you can do is just continue to look at yourself in the mirror and find ways to be better,” Stafford said. “Continue to work on your fundamentals as much as you possibly can, decision making — all those things go a long way. I just continue to trust the process that I have to get ready for football games.”

Jalen Ramsey, the Rams' 2020 All-Pro defensive back, is facing the Jaguars for the first time since they traded him to the Rams just over two years ago.

Ramsey left Jacksonville under a cloud with the fracturing of his relationship with former Jags boss Tom Coughlin, but the Rams have uniformly praised him as a model teammate and leader.

Ramsey is also enormously important to the Rams' defense, playing a do-everything role that allows him to make up for deficiencies in their supporting cast. He is likely to be all over the field against the Jags, who lack a dominant No. 1 receiver.

Jaguars returner Jaydon Mickens is finally getting to play in his hometown. Mickens was scheduled to make the trip to LA with Tampa Bay in Week 3, but he missed the game because of an oblique injury.

The Jaguars signed Mickens off Tampa Bay’s practice squad last week after losing Jamal Agnew to a season-ending hip injury, and now the fourth-year pro gets to return home. Mickens is buying around 30 tickets for family and friends, gifts he expects will double as Christmas presents.

“It’s a long-overdue homecoming,” said Mickens, who begged Buccaneers trainers to give him “something, anything, even an old-school Toradol shot” so he could play in September.

The former Dorsey High School standout ended up at Washington for college. He returned to LA twice with the Huskies, playing at UCLA in 2013 and at USC in 2015, and still owns an exotic car company in Los Angeles.

Jacksonville sped up its offense against Atlanta and saw modest improvement. It was enough that Meyer expects to use tempo more often against the Rams. The Jaguars also put Lawrence in more zone-read situations, a scheme similar to the one he ran to perfection at Clemson.

“It was very efficient for us,” Meyer said. “Once again, teams will be more prepared for it. It’s a two-edged sword. You run a lot of zone read, you better have the complements off it. If you run up-tempo, you better be prepared for some kind of pressure now.”