Rams LB Jones shocked by Young trade, but eager to step up 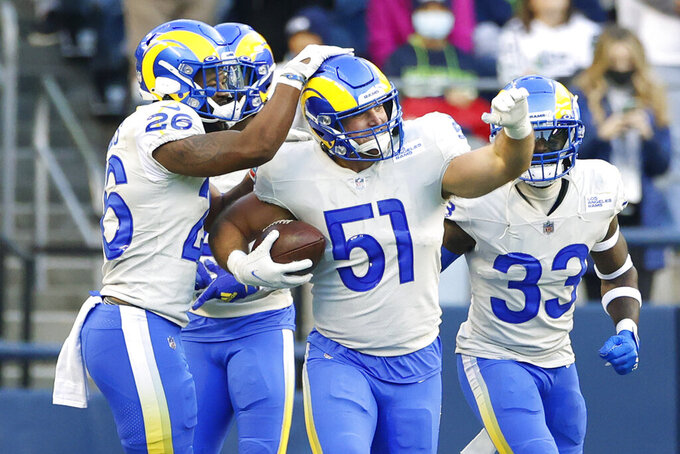 Los Angeles Rams linebacker Troy Reeder (51) celebrates after he intercepted a pass against the Seattle Seahawks during the first half of an NFL football game, Thursday, Oct. 7, 2021, in Seattle. (AP Photo/Craig Mitchelldyer)

THOUSAND OAKS, Calif. (AP) — Ernest Jones' first emotion was not excitement when he learned he had just been given a major role on the Los Angeles Rams' defense.

“My reaction was just shocked,” the rookie linebacker said.

The Rams' decision to trade second-leading tackler Kenny Young to the Denver Broncos on Monday to create about $1.3 million in cap room was a cold-blooded stunner to just about everyone — including Young and Jones, who will be the primary beneficiary of Young's abrupt departure.

“That was one of my guys,” Jones said Wednesday. “Just a guy from Day One when I came in here, he was very supportive and helped me out a lot. So more than thinking about it was my time, I was just thinking about being there for him and making sure he knew that we were brothers before any of these other things happened.

“But now that it’s happened and it’s my turn, I’ve just got to go out there and step up and not let the defense down. Go in there and raise the level of play and do my job.”

Starting Sunday in Houston, the Rams (6-1) are counting on their third-round draft pick to step into a major role on a defense that has been solid despite taking several steps back from the overall effectiveness of last season's NFL-leading unit. Young had been the Rams' most important inside linebacker this season, and he has often been the only one on the field in single-backer defensive sets.

The entire LA defense still seems surprised by Young's departure, but Jones radiates confidence in his preparedness for a new role.

Although he's taken only 45 defensive snaps this season, Jones said he's much more prepared to join the lineup than he was seven weeks ago. During that time he has studied the Rams' schemes and watched Young fill roles in everything from run stuffing and pass coverage to blitzes.

But a middle linebacker's responsibilities frequently come down to tackling, and that skill has always been Jones' strength. While leading South Carolina in tackles in each of the past two seasons, Jones repeatedly demonstrated the physical play and the leadership Jones and the Rams are counting on.

“I just know when it comes down to it, if Ernest can’t do anything else, he’s going to get them down to the ground,” Jones said. “I’m just going into the game knowing you need to get your job done and do what you love to do, and that’s run into people, eyes up, head up, hard as you can, and let’s see what the outcome is.”

Jones praised Young and fellow inside linebacker Troy Reeder for schooling him in the finer details that make the difference in a rookie's growth.

“I feel like for the most part, I’m getting the big picture,” Jones said. “Their knowledge of being in the game and just playing, they’re able to help me out with those little things that make the difference.”

Reeder, a former undrafted free agent from Delaware who has played his way into a key defensive role over his three seasons with the Rams, is also likely to get more responsibilities after Young's departure. Reeder is already off to a strong start to this season with two interceptions and 28 tackles along with his steady inside play.

Reeder started eight games as a rookie after Bryce Hager got injured, so he sees similarities in his career path to Jones' ascendance.

“I’ve played a little bit of everything in my time here, and I’m sure it’s going to continue to grow,” Reeder said. “But at the same time, Ernest is going to come in and he’s going to do a great job for us, too. We’ve seen a lot of growth from him throughout the season, so I’m excited for his opportunity.”

The one upside to Young's departure early in the week is that it gave Jones plenty of time to get his family and friends from his native Georgia and elsewhere to Houston this Sunday to watch his first big game.

NOTES: LT Andrew Whitworth, rookie CB Robert Rochell and and S Jordan Fuller all missed Wednesday's practice with knee injuries. The Rams don't know yet whether any of the three will be unavailable Sunday in Houston. ... DT Sebastian Joseph-Day also missed practice with an injured pectoral muscle, and LB Terrell Lewis sat out with a rib injury. Both still could play Sunday.