Rams' Stafford out of concussion protocol, will play Sunday 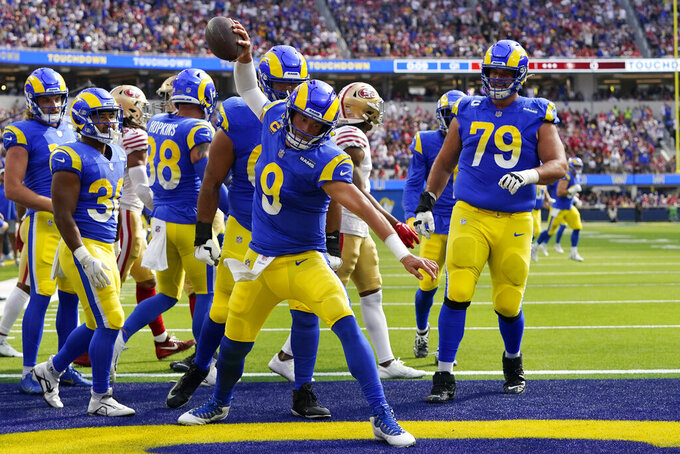 Los Angeles Rams quarterback Matthew Stafford celebrates after scoring a touchdown during the first half of an NFL football game against the San Francisco 49ers Sunday, Oct. 30, 2022, in Inglewood, Calif. (AP Photo/Gregory Bull)

THOUSAND OAKS, Calif. (AP) — Matthew Stafford has been cleared to return to the Los Angeles Rams' lineup Sunday after a one-game absence.

Stafford went into the NFL's concussion protocol 10 days ago following a medical examination, and he missed the defending champions' loss to Arizona last weekend. He apparently was injured during LA's game at Tampa Bay on Nov. 6, but the Rams didn't identify any symptoms during the game.

Stafford participated in every practice this week with the Rams, and he was cleared Friday after meeting with doctors away from the Rams’ training complex. He has completed a career-best 68.4% of his passes this season for 1,928 yards with eight TDs and eight interceptions.

“He looked like himself,” McVay said. “He’s had great command, great communication with his teammates. He’s looked really good, and he’s been the Matthew that we all know and love.”

The Rams haven't confirmed Stafford actually had a concussion, but he sat out for the first time since joining the Rams last season. Backup John Wolford played most of the snaps in Los Angeles' fifth loss in six games.

Stafford has been one of the NFL's most durable quarterbacks over the past dozen seasons, missing only nine games — eight of those in the 2019 season with Detroit after injuring his back.

The Rams (3-6) desperately need better play from an offense that ranks near the bottom of the NFL in several major statistical categories. A turnaround got even harder last week when All-Pro receiver Cooper Kupp sprained his ankle, sidelining the Rams' top playmaker for at least four weeks.

Los Angeles also has even more upheaval on its offensive line, which will start its 10th different combination in 10 games Sunday after losing left tackle Alaric Jackson and right guard Chandler Brewer to injured reserve.

Stafford has been sacked 28 times in eight games, and he will face the Saints without center Brian Allen, who had surgery on his left thumb this week. Allen missed five games earlier this season with a knee injury.

“He’s had some swelling with his knee, so it’s really a combination of both (injuries),” McVay said. “But we were going to have to get that (thumb) fixed regardless (so that) some of the long-term effects didn’t end up inhibiting his ability for years to come.”

Los Angeles also will be without starting left guard David Edwards, who “had a setback” in his return from a concussion, McVay said. Edwards hasn't played since Week 5.

The Rams are likely to face the Saints with three starting offensive linemen who weren't on the roster in Week 1.

NOTES: The Rams signed rookie OT Zachary Thomas off Chicago's practice squad to bolster their depth on the offensive line, which had only six healthy players on the 53-man roster early Friday. Thomas spent the past six seasons at San Diego State before the Bears drafted him in the sixth round. ... DT Greg Gaines is expected to return after missing one game with an elbow injury. ... DT A'Shawn Robinson is questionable for Sunday after missing practice all week with an illness.