Ravens getting healthier as opener approaches 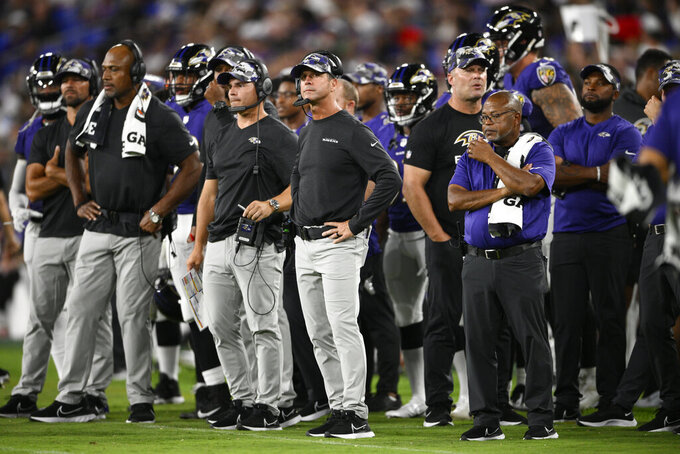 Ronnie Stanley was on the field during the portion of practice open to reporters.

Slowly but surely, the Baltimore Ravens are inching closer to full strength.

The Ravens' 2021 run was so ravaged by injuries that some of their key players are still out for this season's opener.

Still, Baltimore has reason to hope the team's health will be less of an impediment this year. Running back J.K. Dobbins and cornerback Marcus Peters have been able to practice after missing all of last season with knee injuries, and Stanley returning to the offensive line could be a big boost as well.

“It’s really good to have him out there,” fellow tackle Morgan Moses said. "Anytime you can get an All-Pro tackle back, it just boosts the morale of the team.”

Stanley was an All-Pro in 2019, but his 2020 season was cut short by an ankle injury, and he only played in one game last year. It's still not clear what his status will be for Sunday's opener on the road against the New York Jets. Stanley was at practice Monday, but coach John Harbaugh wasn't saying anything definitive about his outlook.

“It just depends on how he’s doing. A lot of it has to do with how he’s feeling and if he’s ready to go," Harbaugh said. "If he feels strong, if he’s moving and feels like he can be successful, and if we see what we need to see. Same thing with J.K., Marcus or any of those guys.”

There's no uncertainty about running back Gus Edwards (knee) and linebacker Tyus Bowser (Achilles), who are starting the season on the physically-unable-to-perform list.

Aside from lingering health concerns, the big issue looming over the Ravens this preseason is Lamar Jackson's contract status. Jackson is entering his fifth-year option season and has not reached an agreement with the team on an extension. He's indicated he wanted a deal done by the start of the season, and there would be some point at which he'd want to put negotiations on the back burner.

“I don’t have any updates on that,” Harbaugh said. "My interactions with Lamar have been all football, and he’s been focused and locked in on that 100%, from a football standpoint. So, that’s kind of where we’re at, and personally I don’t really have anything to add that I know of.”

Although the Ravens aren't completely healthy, the Jets are also dealing with some significant uncertainty as quarterback Zach Wilson works his way back from a preseason knee injury. Wilson threw on the field Monday, but if he can't go, then Joe Flacco is in line to play against his former team.

“We’ll prepare for their offense." Harbaugh said. "Both guys, they run the same offense, essentially, as far as we’ve seen. They bring their own flavor to it, their own style — of course, they’re two different players — but we’ll prepare for the offense and both quarterbacks.”

Although not everyone who was hurt last season is back yet, the Ravens have mostly avoided any major new injuries this year during camp. Of course, they haven't made it to the first game quite yet. Last year, Edwards and Peters went down at practice in the days leading up to the season opener.

That set the tone for a 2021 season in which the Ravens battled gamely, but eventually missed the playoffs with an 8-9 record.

“We didn’t care who was down. We wished that everybody was healthy, but we came to play every game last year, and I was so proud to be a part of this team,” linebacker Justin Houston said. "If you’ve got a group of guys like that, with that much heart and pride about themselves, the sky is the limit, especially if you’ve got everybody healthy and keep them healthy.”