Ravens' Jackson has been spectacular in early part of season 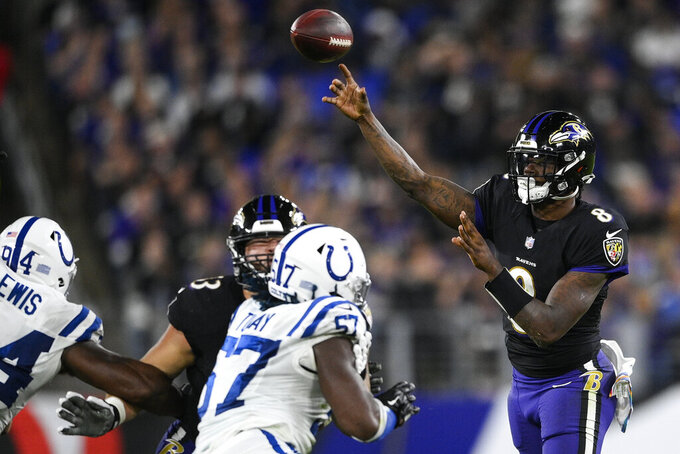 Baltimore Ravens quarterback Lamar Jackson (8) throws the ball during the second half of an NFL football game against the Indianapolis Colts, Monday, Oct. 11, 2021, in Baltimore. (AP Photo/Nick Wass)

BALTIMORE (AP) — Every time the Baltimore Ravens show a new flaw or lose another player to injury, it seems as if Lamar Jackson starts playing even better.

Jackson has been just what the Ravens needed so far this season, and never more so than Monday night against Indianapolis, when he threw for a franchise-record 442 yards and four touchdowns in a 31-25 overtime win. The Ravens were finally held under 100 yards rushing, and the receiving group lost Sammy Watkins to a hamstring injury. Baltimore needed Jackson to play like an MVP, and he did.

Jackson's 442 yards bested his previous career high by 118. In fact, three of his top four performances in yards passing have come in the past three games.

This season, Jackson ranks fifth in the NFL in yards passing, and he is on pace to rush for more than 1,000 yards for a third straight year.

The remarkable thing about Jackson's big passing numbers is that he hasn't had quite as much help as expected. The Ravens drafted receiver Rashod Bateman in the first round, but he hasn't played yet because of groin problems. They also acquired Watkins, but he had to leave Monday's game.

By the end, Jackson basically had two main targets, and that was enough. Andrews caught 11 passes for 147 yards and two touchdowns — and also caught two 2-point conversions. Marquise Brown caught nine passes for 125 yards and two TDs, including the game winner.

It was a rough night for the Baltimore secondary, particularly cornerback Anthony Averett, whom the Colts threw at repeatedly. Cornerback Tavon Young had a sack but also committed an inexcusable personal foul in the final seconds of regulation that helped Indianapolis move into position for a field goal. The Ravens were fortunate that the kick was missed.

Indianapolis scored early on a 76-yard swing pass to Jonathan Taylor, and Carson Wentz ended up throwing for 402 yards.

“I think it was just us not getting off the field, probably making tackles in space, trying to stop the screen game — that was it,” safety Chuck Clark said. “But once we kind of settled in, (we) got off the field one time, (and) kept it going.”

Calais Campbell already plays an important role on the defensive line, and he showed he can make big contributions on special teams too when he blocked a field goal while Baltimore was down eight in the fourth quarter.

“Calais is just a superstar in whatever he does, and he made a play for us on special teams,” coach John Harbaugh said. "Every one of those plays had to be made, obviously, for us to win the game.”

The Ravens were held under 100 yards rushing for the first time in 44 games — a streak that almost ended a week earlier against Denver. Part of the reason Jackson had to carry the Ravens was because the running backs combined for just 24 yards on 11 carries. Jackson had 62 yards rushing.

Watkins' hamstring issue was hard to pinpoint, because offensive lineman Ben Cleveland went down on the same play when Watkins made his final catch of the game. Cleveland was carted off with a knee injury. Offensive lineman Kevin Zeitler injured a knee as well.

86.0 — Jackson's completion rate Monday, the highest since at least the AFL-NFL merger for a quarterback who threw for at least 400 yards. Jackson went 37 of 43 with no interceptions.

The Ravens host the Los Angeles Chargers on Sunday. The Chargers helped Baltimore out last weekend with a 47-42 victory over Cleveland, which enabled the Ravens to take over sole possession of first place in the AFC North.