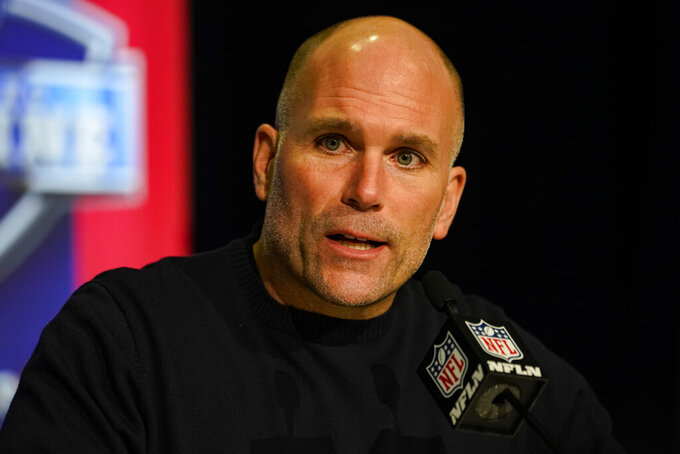 FILE - Baltimore Ravens general manager Eric DeCosta speaks during a press conference at the NFL football scouting combine in Indianapolis, Wednesday, March 2, 2022. DeCosta feels the Ravens have generally been pretty conservative in the draft when it comes to injuries. That's a relevant issue after a decimated Baltimore team dropped six straight at the end of last season to miss the playoffs. The Ravens will certainly hope for better luck in 2022. (AP Photo/Michael Conroy, File)

OWINGS MILLS, Md. (AP) — Last year’s Baltimore Ravens were proof of how important health is in the NFL.

Availability is crucial — and a player’s injury history can be a significant part of his draft profile.

“I think one of the things that we really do believe in is just looking at: Has the guy missed time in college? Has he been a consistent player?” Ravens general manager Eric DeCosta said.

“Sometimes, the guy has an injury history, but doesn’t miss practices and doesn’t miss games. Those type of guys, we feel pretty good about. The guys that miss a lot of time in college, we’ve seen a trend that they miss time at our level.”

DeCosta feels the Ravens have generally been pretty conservative in the draft when it comes to injuries. Last season’s nightmare — when a decimated Baltimore team dropped six straight at the end of the season to miss the playoffs — would have been hard for anyone to foresee. The Ravens will certainly hope for better luck in 2022, but given what happened last year, the health history of anyone they draft will be scrutinized.

“There are some things you simply can’t plan for — the catastrophic injuries, or the freaky-type things that happen, the non-contact stuff, we’ve seen that. We’ve had some players that have never missed any time in their careers and then got hurt here with us,” DeCosta said. “So, I’m not really sure how you can predict that or project that."

Baltimore has the 14th pick in this year’s draft. Only once in the past 15 drafts have the Ravens picked that high — when they took tackle Ronnie Stanley at No. 6 in 2016. Stanley was one of many crucial Baltimore players who weren’t healthy last season. He played in only one game.

One player in this year’s draft who fits a position of need for the Ravens — Michigan defensive end David Ojabo — is coming off an Achilles tendon injury. It’s a little harder to evaluate Ojabo, or anyone else recovering from a major injury.

“In some cases, we have to weigh the talent versus the injury and when we think the guy is going to come back," DeCosta said. "If a guy is talented enough, we may be willing to have him sit out a year. If we think the return on the investment is going to be substantial, then we’ll do that.”

Not only do the Ravens have a higher pick than usual, they also have nine selections in the first four rounds — including five in the fourth.

“I think we do have a lot of flexibility, which is something that we covet — having the chance to move up and down,” DeCosta said. ”Sometimes, you get into a situation, we see it with other teams, where they want to do a trade with us and they want to maneuver, but they don’t have the picks to do it.”

The Ravens brought back defensive lineman Calais Campbell, and they signed defensive tackle Michael Pierce. DeCosta said there could be a run on edge rushers in the top 10, but it’s possible one could fall to Baltimore at 14.

Purdue’s George Karlaftis is an edge rusher who could still be available in the middle of the first round, and Georgia defensive tackle Jordan Davis may also be a possibility.

Stanley’s injury and Alejandro Villanueva’s retirement means it may be a little while before the Ravens know exactly what the offensive tackle spot will look like next season. Baltimore did add Morgan Moses via free agency.

“We feel that there’s an opportunity in the draft to address the tackle spot at some point, whether it’s in the first round or in the fourth round,” DeCosta said. “It’s a very, very deep position class. So, there are a lot of different ways for us to skin the cat, and we’ll do that at some point.”

Baltimore lost cornerback Marcus Peters to a knee injury before last season even started, and Marlon Humphrey was eventually hurt too. That underscored the importance of depth in the secondary.

“We always want to have a strong secondary and have as many corners as possible,” DeCosta said. “We’ve referred to those guys as race cars in the past. This year, we got decimated at that position across the board. We have outstanding players coming back, but again, until they come back, it’s question marks.”