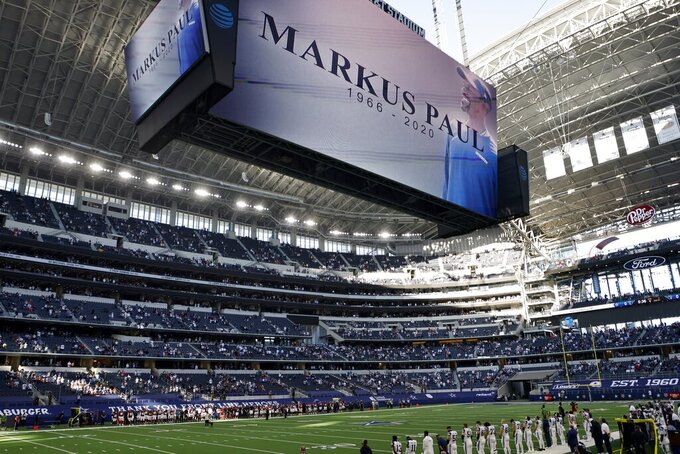 An image of Dallas Cowboys strength and conditioning coordinator Markus Paul is projected on the video screen as all in attendance observe a moment of silence before an NFL football game against the Washington Football Team in Arlington, Texas, Thursday, Nov. 26, 2020. Paul died on Wednesday. (AP Photo/Ron Jenkins)

The first-year Dallas coach couldn't really answer a question about the play because he was still dealing the next morning with the aftermath of the sudden death of strength and conditioning coordinator Markus Paul, who collapsed in the team's weight room and died at a hospital the day before the 41-16 loss Thursday.

The emotions were still raw for the Cowboys (3-8) even after having to gather themselves and play a game critical to their hopes of making the playoffs despite their poor record. McCarthy seemed to have trouble composing himself at times in a conference call with reporters, and special teams coordinator John Fassel broke down as he started an answer about Paul.

The team has said a cause of death was pending for Paul, who was 54.

“It’s been emotionally challenging, overwhelming, I don’t know what words I can use to describe the feeling,” McCarthy said Friday. “It was something that was just so personal for all of us, especially how it happened, where it happened and the timing of it all. We’re just trying to make plans to move forward.”

Dallas was supposed to play on a Thursday-to-Thursday schedule that has become common for the club after Thanksgiving. But the upcoming game against Baltimore was tentatively pushed to Monday, Dec. 7.

McCarthy seemed to have a sense already of the change prompted by COVID-19 issues that forced the NFL to push back the Ravens' game against Pittsburgh twice. It's now scheduled for Tuesday.

The coach was actually looking forward to what amounted to another bye week for the Cowboys, who now might not even have to practice for a full week after the Thanksgiving game. McCarthy wanted his players to have all the down time they could get.

“I think it’s important for them to be with their family,” McCarthy said. “I have no idea what’s going to happen.”

McCarthy and defensive coordinator Mike Nolan went through something similar 15 years ago in San Francisco when their roles were reversed.

Nolan said McCarthy, then the offensive coordinator for the 49ers, was standing near Thomas Herrion when the 23-year-old offensive lineman collapsed and died in the locker room after a preseason game in Denver.

“It’s a very complicated thing, a very difficult thing to handle,” Nolan said. “I do believe, as I even told Mike, he handled it extremely well and he’ll continue to do that. It’s very difficult for someone in that position to even choose the words that you’re going to say to the group because there are so many different things going on in different players’ minds. I think Mike’s very sensitive to that.”

It's been a dizzying first year for McCarthy and his staff taking over a team that had high hopes.

The pandemic kept the defense from getting the live work in the offseason needed to implement a new scheme. Key injuries hit early and haven't stopped, the biggest being star quarterback Dak Prescott out for the season after breaking an ankle in Week 5. The offensive line has been in flux all year because of injuries, and now Dallas is having to dig deep into the depth chart at cornerback.

All of those issues lost their significance Tuesday morning when Paul collapsed. Now the Cowboys have to figure out how to keep the emotional toll from lingering with five games remaining and not all hope lost in the NFC East, the only division that doesn't have a team with a winning record.

“This is the hard part of life,” McCarthy said. “We will deal with it and we’ll use whatever resources we need to. Personal health is always the priority of everybody in our organization. We’ll just continue to work through it.”

The players are getting some extra time to do that on their own after not having much time to process their emotions before the loss to Washington.

“We kind of have a football life and then we have our real lives,” receiver Amari Cooper said after the game. “We live two lives and what happened over the past week, it was tragic and we kind of had to cope with it and in the span of those two lives and still try to focus as much as we can on football while dealing with something in our personal lives.”