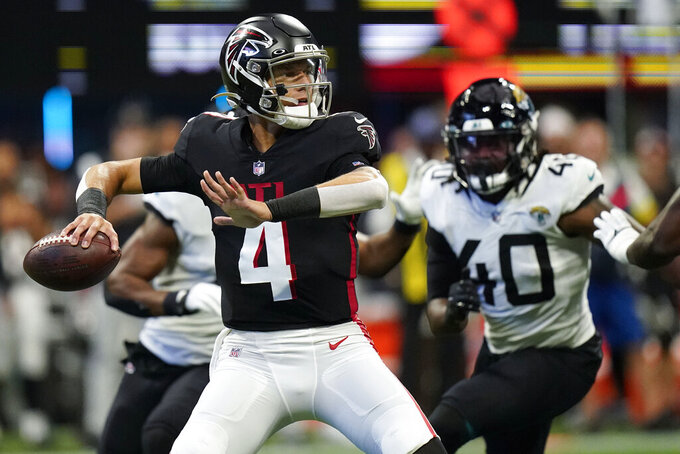 Atlanta Falcons quarterback Desmond Ridder (4) works in the pocket against the Jacksonville Jaguars during the first half of an NFL football game, Saturday, Aug. 27, 2022, in Atlanta. (AP Photo/Gerald Herbert)

He didn’t let it bother him.

The unflappable rookie shook off an interception on his very first pass to lead the Atlanta Falcons to their first home preseason win since 2016, beating the Jacksonville Jaguars 28-12 Saturday.

“It was not the hottest start,” Ridder said with a faint smile. “But you just play the next play ... no matter what happened on the last one.”

Both teams relied mainly on backups and roster wannabes in their preseason finale, with the Falcons (2-1) prevailing behind their third-round draft pick out of Cincinnati.

Playing into the fourth quarter, Ridder completed 14 of 25 passes for 185 yards, including a 2-yard touchdown throw to fellow rookie Tyler Allgeier in the first quarter.

Ridder also guided two impressive touchdown drives in the second half before calling it a day against the Jaguars (0-4).

There was an eight-play, 90-yard possession in which the rookie completed all three of his passes for 69 yards before Caleb Huntley’s 1-yard scoring run. The Falcon then drove 80 yards on 14 plays, with Ridder completing three more passes before Allgeier scored his second TD on a 4-yard run.

The Falcons had lost eight straight home preseason games since moving into Mercedes-Benz Stadium in 2017. The 75,000-seat facility looked less than half-full for Saturday's game.

“We're trying to build something real here,” second-year coach Arthur Smith said. “I'll promise you: This place is gonna be rocking when we get this thing rolling.”

E.J. Perry went the distance at quarterback for the Jaguars. He completed 19 of 27 for 201 yards, with a pair of interceptions.

Perry hooked up with Laquon Treadwell on a 7-yard pass with 12 seconds left in the first half to cut Atlanta’s lead to 14-12.

“A lot of guys today made a statement for a possible roster spot or practice squad spot," first-year Jaguars coach Doug Pederson said.

On the very first play from scrimmage, Ridder threw an ill-advised pass down the middle that was picked off by Daniel Thomas. The Jaguars safety returned it 10 yards to the Atlanta 35, setting up James McCourt’s 54-yard field goal.

The play began to fall apart when one Falcon went the wrong way and Ridder had a rusher in his face. He should have thrown it away. Instead, he showed his inexperience.

“Trying to be a hero,” Smith said. “He let one mistake become two.”

By the end of the game, Ridder had more than made up for it.

McCourt also connected from 38 yards, while Jake Verity was wide left on a 46-yard try.

In their search for a reliable kicker, the Jaguars have tried out four contenders during the preseason.

Ryan Santoso was let go on Tuesday, the same day the team claimed McCourt off waivers. Then, on Friday, the Jaguars added Verity to the roster to give McCourt some competition in the preseason finale.

Pederson said Saturday's game "will not necessarily decide it. Maybe we'll figure it out this week in practice and go from there, make that decision possibly Tuesday.”

The special teams set up an Atlanta TD.

Quinton Bell ran right by a backfield blocker to smother a punt by Logan Cooke. DeAngelo Malone recovered the blocked kick at the Jaguars 1, and Qadree Ollison ran it for a touchdown on the next play to make it 14-6.

Both teams sat their No. 1 quarterbacks.

Trevor Lawrence took it easy after playing in two preseason games for the Jaguars. Same for Atlanta's Marcus Mariota, who watched from the sideline as his young backup got his first NFL start.

The Falcons’ defense was buoyed by the return of Isaiah Oliver and Deion Jones.

Oliver played nickel back in his first game action since a season-ending knee injury early in the 2021 season. He missed the final 13 games, and also sat out the first two preseason games.

“It's good to play football without thinking about it, without being hesitant,” Oliver said. “I feel like I'm in a good spot going into the season.”

Jones suited up three days after being activated from the physically unable to perform list.

A starter since being drafted by the Falcons in 2016, Jones faces an uncertain future in Atlanta. But at least he’s fully recovered from right shoulder surgery.

Falcons ILB Dorian Etheridge was carted off the field late in the second quarter after sustaining what appeared to be a serious left knee injury on a Jaguars running play. Etheridge was fighting for a roster spot after playing in five games a year ago as an undrafted rookie out of Louisville.

Jaguars: Begin the regular season Sept. 11 at Washington against the Commanders.