Rivers runs through it? 76ers count on championship with Doc 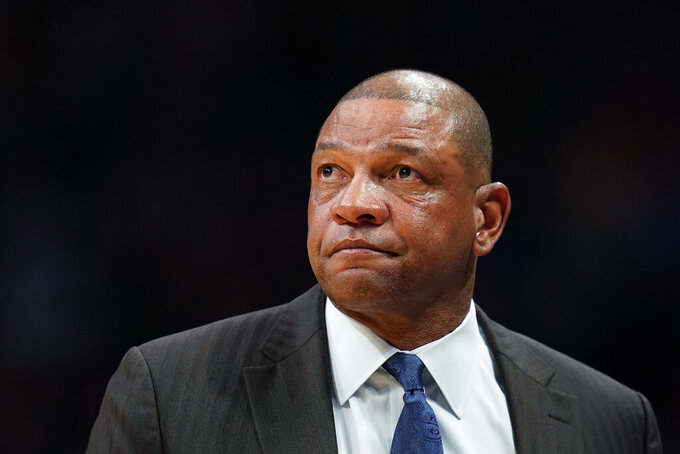 FILE - In this Jan. 12, 2020, file photo, Los Angeles Clippers coach Doc Rivers looks on during the second quarter of the team's NBA basketball game against the Denver Nuggets in Denver. The Philadelphia 76ers introduced Rivers as their head coach on Monday, Oct. 5, 2020. Rivers takes over as the 25th head coach in 76ers history after a seven-season run as head coach of the Clippers. (AP Photo/Jack Dempsey, File)

PHILADELPHIA (AP) — Philadelphia Eagles quarterback Carson Wentz got backhanded compliments from NBC's Al Michaels and Cris Collinsworth on Sunday night for supposedly not knowing the 76ers had hired Doc Rivers as their coach. Eagles coach Doug Pederson, who knows how to win a championship in Philly, can’t wait to meet the newest member of the city’s coaching fraternity.

“I’d love the chance to introduce myself and welcome him to Philadelphia,” Pederson said.

Meet-and-greets with Rivers will mostly have to wait because of restrictions in place amid the COVID-19 pandemic. Rivers, hired last week as the 25th head coach in Sixers history, has spoken by phone with most of the players on a team that was swept out of the Eastern Conference playoffs in the first round. He told them he’s ready to win the franchise’s first NBA title since 1983.

The Sixers have socially distanced themselves from the Larry O’Brien Trophy long enough — and Rivers has the experience of holding the trophy that goes to the NBA champions, coaching the Boston Celtics to the title in 2008.

The key to winning one? Well, it just may be the sort of collaborative effort with the front office that seemed passé in Philly just weeks ago. General manager Elton Brand said after the Sixers were eliminated that the “collaboration days didn’t work too well” and there would be a thorough assessment of the front office. The Sixers hired Rivers days after he parted with the Los Angeles Clippers — though the front office remained intact.

“We’ll work together,” Rivers said Monday. “That’s one of the things that was so exciting about this job, to have that opportunity with Elton. I think we have a chance to build something great here, not just on the court. I actually think it starts off the court. We have to get that part right. I think Elton and I will have a chance to form an amazing partnership together and we’ll grow from there.”

Rivers takes over after a seven-season run as coach of the Clippers — where he twice failed to hold 3-1 series leads in the playoffs, including this year against the Denver Nuggets in the Western Conference semifinals.

“I love that we got up 3-1. It tells us we were doing something great,” Rivers said.

But he conceded the collapse will nag at him until he can win it all in Philly, saying “that’s the ‘move on’ part.”

He’s tasked with piecing together a roster with two tantalizing All-Stars in Joel Embiid and Ben Simmons and a bloated payroll that could affect Philadelphia's ability to make major moves in the offseason.

Brand gave some perfunctory remarks to open the virtual press conference but did not take any questions.

“We know there’s still a lot of work to be done but today marks a pivotal day for the 76ers organization,” Brand said.

Through the team, Brand declined to answer additional questions from The Associated Press.

Rivers, who turns 59 next week, said Brand called him within hours of his split with the Clippers. Other teams were interested in Rivers, but the appeal of coaching Simmons, Embiid and a team that shouldn’t be too far from Eastern Conference title contention had him quickly on his way to Philly to meet the ownership group.

“I was not going to coach just anybody,” he said. “I was ready to take a break. It just depended on the team that was available and if I thought that team, in my opinion, was ready to win.”

He found one in Philly, signed a five-year deal and got to work trying to figure out how to maximize the skills of Embiid and Simmons. For all their fantastic play and accolades — Rivers earlier this year with the Clippers compared them to Magic Johnson and Kareem Abdul-Jabbar — both players have deficiencies that have stymied the Sixers in their championship pursuit.

“It clearly works when they play together,” Rivers said.

Embiid has been slowed by injuries and conditioning woes, and he falls in love with 3-pointers. Simmons has almost no outside shot in an era where the 3-pointer is king. Simmons entered the season 0 for 17 in his career from 3-point range. This season he tried 17 more and made two of them.

“I’m not that concerned by it like everyone else is,” Rivers said. “He’s young. I’m sure there’s things that we’re going to work on and get him better at.”

It’s up to Rivers to figure out how to make it all work and build a championship team in Philadelphia.