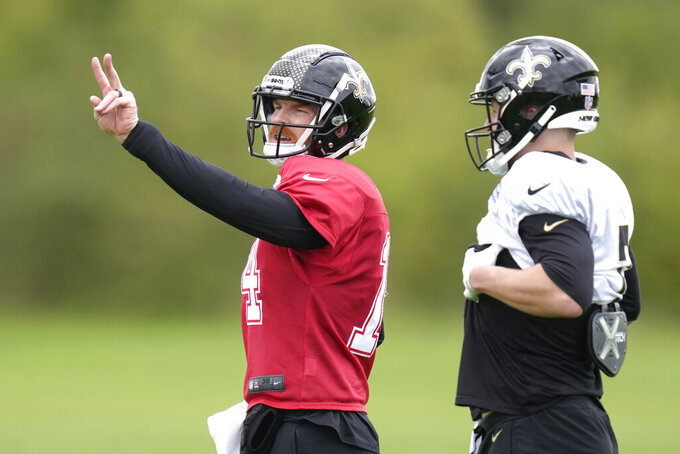 LONDON (AP) — New Orleans Saints quarterback Jameis Winston had said “I'll be out there” for practice on Thursday. He wasn't.

Winston was held out of a second straight practice because of a back injury, raising questions about whether he'll be able to play against the Minnesota Vikings on Sunday at Tottenham Hotspur Stadium in London.

A day earlier, coach Dennis Allen said he anticipated Winston would return to the practice field, and the quarterback insisted he was preparing to start in the NFL’s first international game of the season.

On Thursday, offensive coordinator Pete Carmichael wouldn't address if Winston's status had changed but said the plan was to “see where he was at day to day and then see if we could get him out there.”

“Hopefully it happens tomorrow,” Carmichael said. “Obviously, the head coach and the trainers have a plan in place. I'll let Dennis make those calls.”

Carmichael said he has “a ton of confidence” in Dalton if the veteran is called on.

“He's smart, he gets in and out of the huddle. He knows what we're doing, what the plan is,” Carmichael said.

The Saints have confidence in Hill, as well, “if it ever came to that,” Carmichael said.

Allen, who did not address the media on Thursday, had downplayed the significance of Hill’s QB reps on Wednesday, when said Winston just needed “a little bit of recovery.” Asked if he had concerns about Winston’s availability for Sunday, Allen said: “I don’t think so.”

Winston, who has also dealt with an ankle injury, has been sacked 11 times in three games for New Orleans (1-2).

“I’m preparing like every week — preparing to play,” Winston said Wednesday. He added that he expected to start against the Vikings: “That’s my plan.”