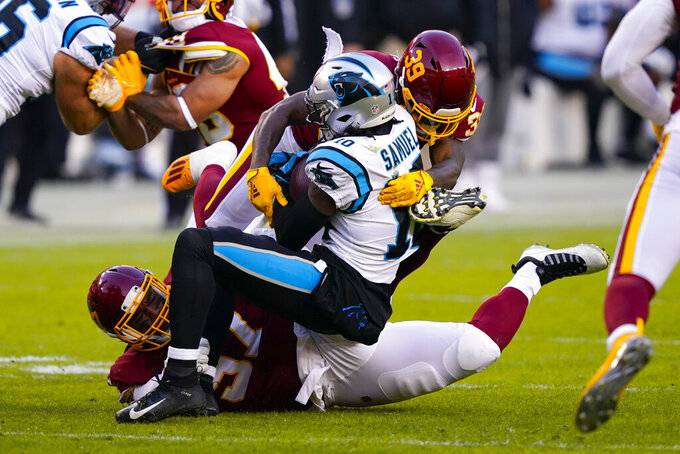 LANDOVER, Md. (AP) — With Christian McCaffrey out again, the Carolina Panthers snapped their three-game losing streak thanks to a big performance from someone who wasn't on the radar for many fantasy football championships.

Wide receiver Curtis Samuel did his best McCaffrey impersonation in a 20-13 victory at Washington on Sunday, setting career highs with 106 yards receiving and 52 yards rushing. Samuel broke off a 45-yard run to set up one of the Panthers’ two offensive touchdowns and caught five passes from Teddy Bridgewater.

“Most importantly, we got the win,” Samuel said. “We wanted to go out there and win today. You know what, if it takes me to get numbers like that, whatever the case may be, my main focus is to win.”

Carolina (5-10) hasn't done much winning lately, having lost eight of nine to fall out of playoff contention. Spoiling old coach Ron Rivera and Washington's first attempt to clinch the NFC East was motivation enough, and Samuel was a key to getting the job done despite the Panthers being outgained 386-280.

“Curtis has been outstanding for us,” Bridgewater said after going 19 of 28 for 197 yards. “He’s been able to do some things that you don’t usually see wide receivers do. We’ve asked him to do a lot, to be a running back, to be a lead blocker and run around and catch passes. He’s done everything.”

Samuel got used to that slash role at Ohio State, though it typically belongs to McCaffrey, who has been limited by injury to three games this season. That gave the 2017 second-round pick a showcase Sunday to prove he can do it all — a valuable commodity with free agency upcoming.

“Any time I get the opportunity to touch the ball, make most of it,” said Samuel, who at 24 should be highly sought-after with his rookie contract up. “I feel like as a businessman this year: fortunate enough that I get to run the ball and I get to catch the ball. I can put defenses in a bind. Why just use me as a receiver when I could do so many so many more things?”

Washington found that out the hard way. Samuel busted it to the outside on his longest run of the day and dragged would-be tackler Jeremy Reaves along with him a few extra yards to the 6.

“They were just making plays,” Washington safety Kamren Curl said. “They get paid, too. Some guys are going to make plays.”

Much like he wanted to credit Bridgewater and the rest of the offense for his career day, Samuel didn't want to hog the accolades for that run that set up a key Panthers touchdown.

“The whole line did a great job of blocking," Samuel said. “They did what they had to do. I had to take over at that point. I feel like no one man can tackle me in space. I know I had to make that guy miss. That’s what the coaches expected (of) me.”