Sanders quickly fitting in with Bills after 2 TD outing 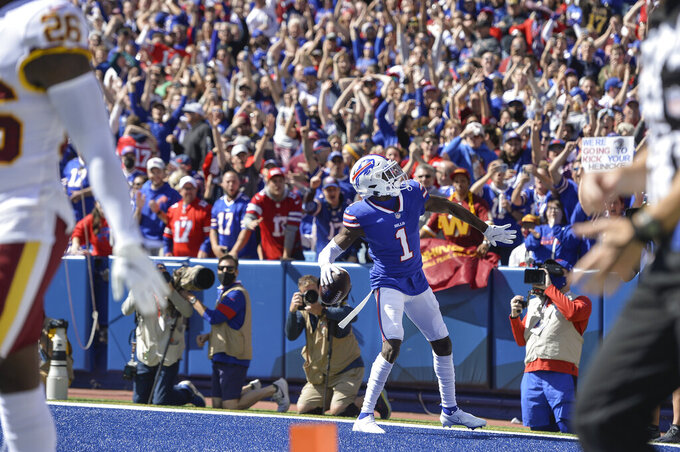 Buffalo Bills wide receiver Emmanuel Sanders (1) gestures to fans after making a catch in front of Washington Football Team's Landon Collins (26) for a touchdown during the first half of an NFL football game Sunday, Sept. 26, 2021, in Orchard Park, N.Y. (AP Photo/Adrian Kraus)

ORCHARD PARK, N.Y. (AP) — Emmanuel Sanders paused the start of his inaugural training camp session with reporters to adjust the strap of his new Buffalo Bills cap, which was dipping down on his forehead.

“Like my head done got smaller,” the receiver said with a laugh. “OK, you all going to be on Twitter talking about my hat issue, know what I’m saying? I struggled today at practice and now with this hat.”

In his 12th NFL year and on his fourth team in three seasons, Sanders has become accustomed to changing hats. What’s also true of the 34-year-old, who won a Super Bowl in Denver and caught passes from the likes of Ben Roethlisberger, Peyton Manning and Drew Brees, is Sanders’ ability to find a comfortable fit where ever he lands.

Such has quickly become the case in Buffalo.

After experiencing difficulty establishing a rapport with quarterback Josh Allen in Buffalo’s first two games, Sanders enjoyed a coming-out performance in a 43-21 win over Washington last weekend. He scored twice and essentially doubled his season production with five catches for 94 yards.

If Sanders assessed his first two outings — six catches on 14 targets for 100 yards — as grading out to a `B,′ he was much happier with acing the latest test, and with Buffalo (2-1) preparing to host Houston (1-2) this weekend.

This was the type of performance both Sanders and the Bills envisioned in March, when he signed a one-year contract in free agency to replace John Brown, who was not re-signed this offseason. Sanders, who turned down the Bills a year earlier for the chance to play alongside Brees in New Orleans, kept tabs on Buffalo all last season and was impressed by Allen’s development into one of the NFL’s top young passers.

The Bills, meantime, believed Sanders’ versatility — he can play the slot, make catches across the middle and beat defenders deep — ideally complemented their offense’s pass-first aggressive philosophy while playing alongside Stefon Diggs and Cole Beasley.

It’s no coincidence Sanders and Beasley, who has similar route-running traits, were teammates at SMU, where they developed their craft in June Jones’ run-and-shoot offense.

“I’m old school. I’m backyard football like `Let’s strap up, hey kid, get in here and let’s play football.′ That’s just how I think,” Sanders said. “And that’s how Josh plays, too.”

His first touchdown on Sunday, a 28-yarder, came with Allen scrambling out of the pocket and hitting Sanders, who got his feet down just before tumbling out of bounds. His second TD, and 50th of his career (including one rushing), came when Allen found Sanders open in the back of the end zone for a 5-yard catch.

Sanders has established himself as one of his generation’s top receivers. Since being selected in the third round of the 2010 draft by Pittsburgh, his 8,813 yards receiving rank eighth, and 673 catches ninth among players over that span.

Sanders has also won over his Bills teammates and coaches with his work ethic and selflessness.

Though the catches weren’t coming, Sanders made his presence felt in other areas. Before last weekend, his most impactful play was making a key block to spring Devin Singletary on a game-opening 46-yard touchdown run in a 35-0 win at Miami in Week 2.

“That just makes me smile, honestly. I mean, it brings a lot of joy to my heart,” coach Sean McDermott said of Sanders’ block.

Sanders referred to the block as one the favorites plays of his career, while noting it was “almost sweeter" than scoring a touchdown.

For Allen, it was only a matter of time before the two began clicking.

“I’m glad that we got that going. But again, that wasn’t a fluke game. That wasn’t lucky or by chance. This guy just does the right things,” Allen said. “That’s football for you. You do the right thing and it’s going to get noticed one way or another.”

The performance against Washington eased whatever lingering questions Sanders had about feeling welcome in Buffalo.

“The thing is, you’ve got to prove yourself all the time,” Sanders said. “To come to this fanbase and prove myself, show everybody what I can do, it feels good.”