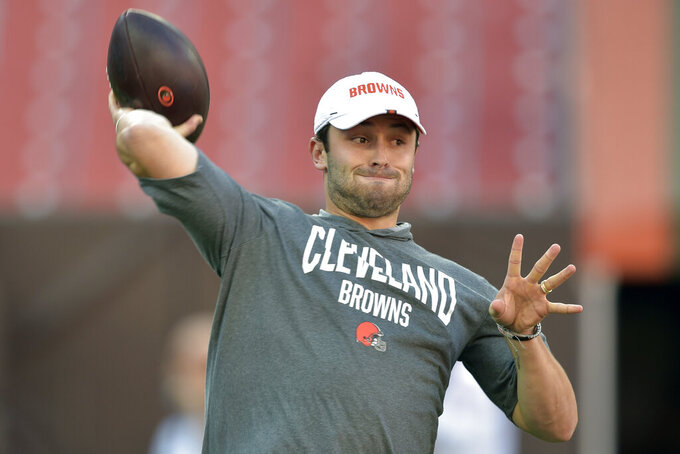 CLEVELAND (AP) — The hype has bordered on hysteria for months. It's time for the Cleveland Browns to show if it's warranted.

Magazine covers, photo spreads. No team in the NFL received more offseason publicity than the Browns, who went 0-16 just two years ago but are considered legitimate Super Bowl contenders following the acquisitions of superstar wide receiver Odell Beckham Jr., running back Kareem Hunt and others.

It's a stunning turnaround for a team that hasn't won a division title in 30 years, participated in the playoffs in 15 years — the league's longest drought — or started 1-0 since 2004.

These star-studded Browns could be different.

"We've had a long offseason," said quarterback Baker Mayfield, who went from backup to record-setting rookie last season. "It's been a long wait. I feel like it's been a longer one than last year, so we're ready to go. I'm ready to go. It is all business."

The Browns open Sunday against the Tennessee Titans, who just missed the playoffs a year ago and have seemingly played in the AFC's shadows for years.

They're accustomed to going unnoticed, and three-time Pro Bowl tight end Delanie Walker said he doesn't mind that the spotlight will be trained on Mayfield, Beckham, first-year coach Freddie Kitchens and the rest of the Browns.

"That's the NFL. They like to pick the team they assume is going to be Super Bowl champs because they got guys on that team that I guess they can turn a whole organization around, just two or three guys," said Walker, who suffered a season-ending injury in Week 1 last season.

"But, hey, that's how it goes. I like that they get the hype. The Tennessee Titans have always been under the radar. What's new? So I expect them to talk about Cleveland Browns, Cleveland this, Cleveland that. We're going to go in there and play football. As a group, we just got to handle the noise and play our game."

The Browns have a similar plan. Mayfield, never shy about speaking his mind, believes the Browns have offensive advantages across the board.

"I have full confidence in all of our guys, all of our playmakers, skill position guys that if they have one-on-ones, they should be licking their chops because they should all take that as disrespect," he said. "But that's the type of team that we have and need to take advantage of. It's going to be a matchup game."

And for the Browns, a quick test of their legitimacy.

Some things to know before the season opener:

The Browns put Beckham in bubble wrap during the preseason, holding him out of four games and team drills in practice because of a minor hip injury.

The three-time Pro Bowler, who missed 16 games the past two seasons in New York because of leg issues, isn't at 100 percent but said the injury won't prevent him from making his much-anticipated debut with Cleveland.

Titans Pro Bowl left tackle Taylor Lewan will miss the opener, serving the first game of his four-game suspension for performance-enhancing drugs. Tennessee will start reserve tackle Dennis Kelly, who has primarily played right tackle before getting a crash course on the other side in the preseason.

Cleveland is 1-18-1 in openers since 1999, with the lone win coming against Baltimore in 2004. The Browns did manage a tie last season against Pittsburgh, and safety Damarious Randall said there's no extra emphasis on beating the Titans.

"Obviously, we want to go out there and win Week 1," Randall said. "But I mean, that's not the Super Bowl, and our ultimate goal is to win the Super Bowl."

The Browns chose rookie draft pick Austin Seibert as their kicker over Greg Joseph. Seibert shook off a slow start in camp and went 7 of 9 on field goals in the preseason.

The Titans were forced to make a switch, placing veteran Ryan Succop on injured reserve after he underwent offseason surgery on his right, kicking leg. They signed Cairo Santos, who beat Succop out for the job in Kansas City in 2014.

Santos is with his fifth NFL team after spending the preseason with Tampa Bay.

The Titans return nine of 11 starters for their second season with defensive coordinator Dean Pees, and they had the NFL's third-stingiest scoring defense in 2018 giving up just 18.9 points per game. They were the league's second-best backed up inside their own 20, giving up TDs just 44.7 percent of the time. They ranked eighth in total defense allowing 333.4 yards per game and sixth against the pass (216.9) with a secondary led by safety Kevin Byard.