Shurmur: Good start by Jones does not create QB controversy 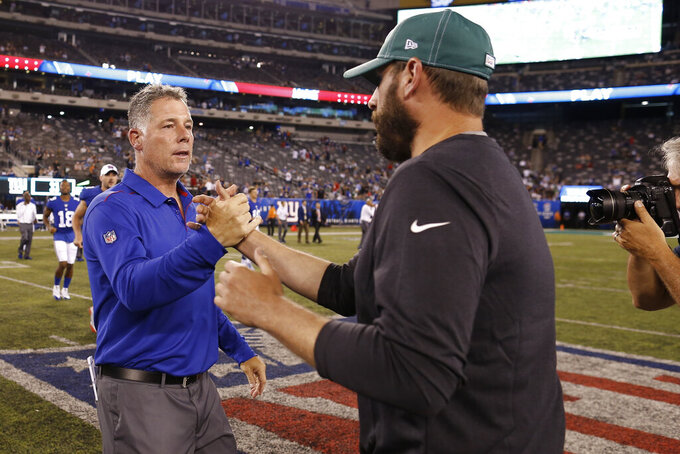 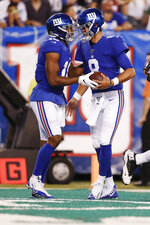 Coach Pat Shurmur said Friday that Jones' perfect passing performance and touchdown throw on his only series in the 31-22 preseason victory over the rival Jets has not caused him to change his belief that 38-year-old Eli Manning is the Giants' starting quarterback heading into the season.

Jones, the sixth pick overall in the draft, clearly had the better game, hitting all five of his passes for 67 yards. He capped his weather-shortened evening with a 12-yard pass to Bennie Fowler III in the right corner of the end zone.

Shurmur had planned to use the Duke rookie for another series or two but sat him after the game was suspended for 59 minutes late in the first quarter because of severe weather.

Manning, who is entering his 16th season, had a three-and-out series to start the night for the offense. He hit his only pass, a 3-yarder to tight end Scott Simonson on the opening play from scrimmage, but he failed to see a wide-open Rhett Ellison 20 yards downfield on the play.

Shurmur noted the performances were in just one game.

"Listen, we're not going to play the 'what ifs,' and I would say this: Nothing has changed," he said. "This is the first game and I expect Daniel to play well, I expect him to go out and improve, and for the people that don't know him, impress them. That's what we expect from him. We expect that from Eli, we expect that from everybody. So our expectations for him have not changed, and in my mind our situation hasn't changed."

Shurmur said the coaching staff is getting the team ready for the opener at Dallas on Sept. 8.

He pointed out after the game that Jones failed to move the tight end into the right position on his very first play. That left running back Wayne Gallman to take on a defensive lineman. He got much-needed help from Ellison.

"I think to the naked eye or the casual observer or even the educated observer, when you don't have all the information there's a lot of things that happen behind the scenes," said Shurmur, who went 5-11 in his first season with the Giants. "Things that we certainly take into account all the time with all the players. So yeah, that's important, because if you think about it, you could get away with something but then you know in a different situation that could be something that could get you."

NOTES: Shurmur said rookie RB Jon Hilliman is in the concussion protocol. LB Alec Ogletree tweaked a calf muscle. ... RB Wayne Gallman is having a foot strain evaluated. ... WR Darius Slayton (hamstring), CB Grant Haley (shoulder) and T Chad Wheeler (back) are moving closer to practicing after either being out or limited in recent weeks. ... The players have off Saturday and practice on Sunday.