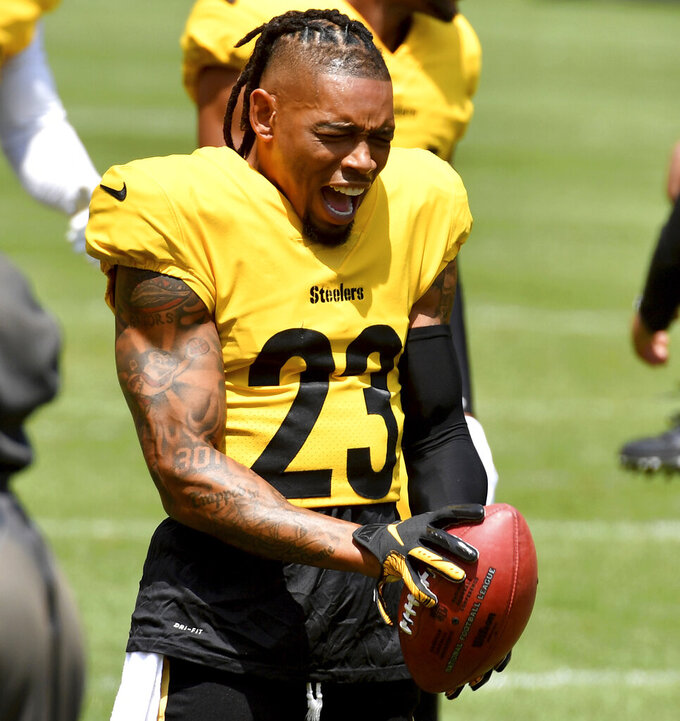 PITTSBURGH (AP) — Joe Haden allows he's not as fast as he was a decade ago.

Then again, there were few players in the NFL who could hang with the longtime cornerback during the early days of his career.

Yet the now 32-year-old believes he hasn't lost a step since he arrived in Pittsburgh on the eve of the 2017 season. It's one of the reasons he's gone public about his hope that he sticks with the Steelers long after his current contract expires next spring.

“My tape speaks for itself,” Haden said.

Pittsburgh saw enough in 2020 — when Haden picked off two passes and knocked down 14 others for the NFL's third-ranked defense — to keep Haden rather than fellow cornerback Steven Nelson during the offseason. The Steelers let Nelson go in a salary cap move even though Haden carried a higher cap number of $15.75 million for 2021.

That's just the nature of the business, something Haden became familiar with when the rebuilding Browns let him go at the end of training camp four years ago. He sprinted to sign with the Steelers, where has flourished. He made the Pro Bowl in 2019 and has missed just three games over the past three seasons while remaining effective on the other side of his 30th birthday.

Haden is well aware 30 serves as an expiration date of sorts for players who make a living chasing receivers who are usually bigger, stronger and in some cases, faster.

He started preparing a few years ago, hiring a full-time physical therapist to help him take care of his still wiry 5-foot-11, 195-pound frame. He's modified his offseason program to focus more on speed than strength, figuring it doesn't matter how strong he is if he can't track down the man he's paid to cover.

Though he's the third-oldest player on the team behind quarterback Ben Roethlisberger and defensive tackle Tyson Alualu, there's a vitality to Haden that plays in stark contrast to veteran defensive lineman Cam Heyward. Haden's a few weeks older than Heyward, though it'd be difficult to tell if you watch them during practice.

“You see this baby face?" he said.

There remains a spring in Haden's step. He ran step for step with 23-year-old wide receiver Chase Claypool on a deep ball down the sideline on Monday, knocking the pass away as they both fell to the ground. Not every gamble, however, paid off. He made a diving attempt to intercept a pass to James Washington only watch the ball just sail past his fingertips and into Washington's hands for what turned into a long gain. Haden scrambled to his feet and gave chase with a smile even as his teammates roared “oooooohhh” when he came up empty.

Hey, it comes with the territory.

Even with the departure of Nelson and linebackers Bud Dupree and Vince Williams, Haden believes the 2021 version of the Pittsburgh defense will be as good if not better than the 2020 edition that helped carry the Steelers to the AFC North title.

He's impressed with defensive back Cam Sutton's versatility as he bounces from outside to inside and back again. He likes what he's seen from James St. Pierre, who figures to be given every opportunity to crack the top four defensive back rotation.

What happens after that will likely remain a mystery, at least for now. The Steelers have plenty of cap space available in 2022 and beyond, though how much they'd be willing to spend on a cornerback in his mid-30s is unknown. Haden appears less concerned about money than the chance to finish his career in a place he's grown to love.

“I obviously want to stay here,” he said. “Just the organization, the staff ... I want to be here.”