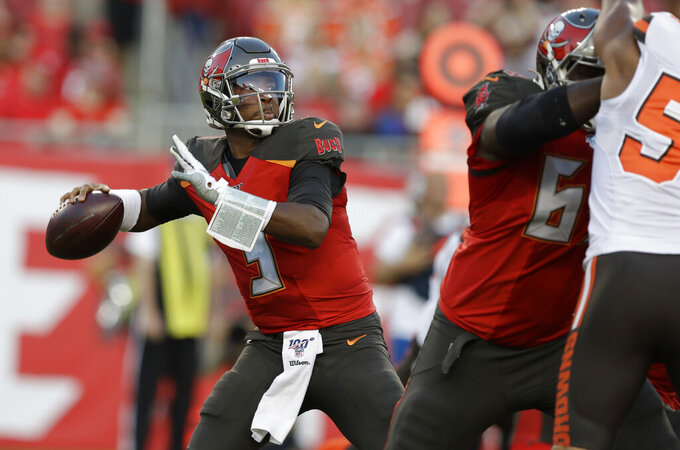 Tampa Bay Buccaneers' Jameis Winston (3) throws a pass during the first half of an NFL preseason football game against the Cleveland Browns Friday, Aug. 23, 2019, in Tampa, Fla. (AP Photo/Chris O'Meara)

TAMPA, Fla. (AP) — Loud music no longer blares from speakers towering above the practice field. A pingpong table and basketball hoop are gone from the middle of the locker room, too.

Bruce Arians is back in the NFL following a brief hiatus, trying to establish a different culture within the Tampa Bay Buccaneers, who open their first season under the 66-year-old coach against the San Francisco 49ers on Sunday.

The Bucs haven't made the playoffs since 2007, the league's second-longest postseason drought. They've compiled the league's worst record over the past eight years, finishing last in the NFC South all but one of those seasons.

"I think your first three years, you have to establish a winning attitude and a winning culture," Arians, the fifth coach in a decade to take a crack at making Tampa Bay — which last won a playoff game during its 2002 Super Bowl run — relevant again.

"After your third year, it can be 'Let's just get to the first game healthy with everybody' because I know what I have," Arians added. "I think teaching guys and finding ways to win — whether it's guys that got cut or not — it still permeates through your locker room."

San Francisco — 4-12 a year ago, when quarterback Jimmy Garoppolo missed most of the season with a knee injury — is another team hoping to take a step forward in 2019.

The 49ers, entering their third season under coach Kyle Shanahan, are confident this is the year they finally can view their record as a sign of progress.

"I think this year is more evident than ever since I've been here. It's just we have the leaders, we have guys holding people accountable and taking charge," Garoppolo said. "It's trickling down, so I think it's, we're going to put more pressure on ourselves than anyone else is."

After an up-and-down preseason and training camp, Garoppolo gets a chance to show whether he's fully recovered from last year's torn ACL that cut short his season after three games. San Francisco gave Garoppolo a $137.5 million, five-year contract in 2018 to be the franchise quarterback, but he has only made 10 starts in five seasons with New England and the 49ers.

Garoppolo won his first five starts with San Francisco in 2017, but didn't look as good early last season when he completed less than 60% of his passes in his three starts and saw his yards per attempt drop, while his sack and interception rates went up.

"It's been a long time coming, so I'm excited to get back out there," Garoppolo said.

One of the reasons Tampa Bay hired Arians after going 5-11 a year ago is the coach's reputation for helping quarterbacks reach their potential. Among the QBs he's worked with during their careers are Ben Roethlisberger, Peyton Manning, Andrew Luck and Carson Palmer.

While Winston is less than 200 yards away from becoming the Bucs' career passing leader, he's entering the final year of his rookie contract and has yet to establish himself as a long-term answer at QB. Arians said his latest pupil has everything it takes to be elite if he improves his decision-making and cut downs on turnovers.

"I think just as a competitor you are always constantly trying to take on more than what you should. ... But something coach has expressed to me is to allow everyone else to help," Winston said. "We have tremendous players on the offensive side and on the defensive side, so that's been my main focus — to go out there and do my job. Do my job right and let everything else fall into place."

After setting NFL records for futility last year with seven takeaways and two interceptions, the Niners set out to add more playmakers on defense. The biggest additions came at defensive end where speed rusher Dee Ford was acquired in a trade from Kansas City and Nick Bosa was drafted second overall.

San Francisco made no major upgrades in a suspect secondary, hoping that Richard Sherman will be even better in his second year back from a torn Achilles tendon, fellow cornerback Ahkello Witherspoon will have a bounce-back year, and Jaquiski Tartt and Jimmie Ward can solidify the safety spot.

Bucs receiver Mike Evans had 88 receptions and ranked third in the NFL in receiving yardage with 1,524 a year ago, when he joined Randy Moss and A.J. Green as the only players in league history to begin a career with five consecutive 1,000-yard seasons.

Garoppolo isn't the only 49ers player coming back from a torn ACL. Linebacker Kwon Alexander also went down with a season-ending knee injury last October and is eager to show he's back in form. The opener will be especially sweet for Alexander, who spent his first four seasons in Tampa Bay before signing with San Francisco as a free agent. Alexander said he's had this game circled on his calendar since the schedule came out in April.

"I think he's fired up," Shanahan said. "He's fired up every day I've ever been around him. I haven't seen anything different. Now that we're playing Tampa I think it would be hard for him to be more fired up, but I'm sure he's got some big emotions going back to a place that he's got a lot of respect for and that I know he enjoyed and I know it will be fun for him.