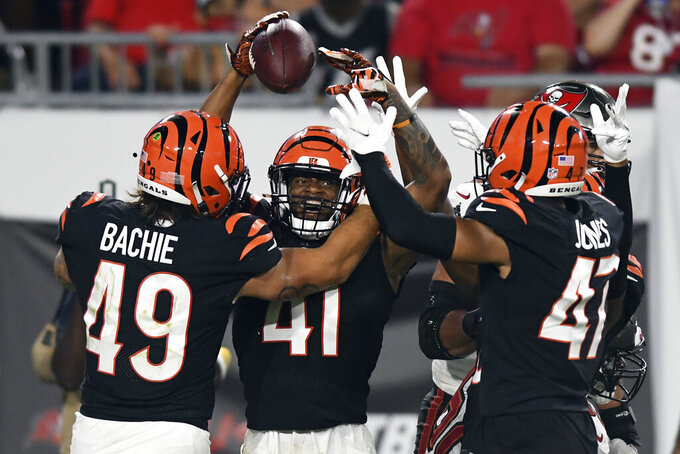 Cincinnati Bengals defensive back Trayvon Henderson (41) celebrates with linebacker Joe Bachie (49) after a play against the Tampa Bay Buccaneers during the second half of an NFL preseason football game Saturday, Aug. 14, 2021, in Tampa, Fla. (AP Photo/Jason Behnken)

TAMPA, Fla. (AP) — A little over six months after becoming the first team to win a Super Bowl played on its homefield, the Tampa Bay Buccaneers were excited about finally being back in Raymond James Stadium.

Winding up on the wrong side of the scoreboard in a 19-14 preseason-opening loss to the Cincinnati Bengals didn't dampen the mood Saturday night.

“I didn’t know what to expect. ... But actually seeing all the fans and actually stepping back on the turf, it feels really good to be back out here man," linebacker Lavonte David said. "It felt like it’s football season again.”

Chris Evans finished a long drive with a 1-yard touchdown run and kickers Evan McPherson and Austin Seibert combined for four second-half field goals for the Bengals, who played without quarterback Joe Burrow. They also didn’t see much of Tom Brady or the rest of Tampa Bay’s regulars, either.

With Brady and his talented supporting cast sitting after playing just six snaps during the lone series the 44-year-old quarterback worked, veterans Blaine Gabbert and Ryan Griffin and second-round draft pick Kyle Trask ran the offense the remainder of the night.

Burrow, the 2019 Heisman Trophy winner and the first overall selection in last year’s draft who’s coming off major reconstructive knee surgery, did not dress. The Bengals got extended looks at Brandon Allen and Kyle Shurmur at quarterback.

“I was encouraged by a lot of things I saw,” said Bengals coach Zac Taylor, who also liked the way his defense began the game against Brady.

“It was six and out, I think,” Taylor added. “They got them off the field, finished with a sack. That was a good way for them to start.”

Griffin played into the third quarter for the Bucs, who return all 22 starters from the star-laden roster coach Bruce Arians and general manager Jason Licht assembled around Brady after signing him in free agency last year.

Trask, who the Bucs are grooming as a potential successor to Brady, entered midway through the third quarter. The former Florida star completed 4 of 15 passes for 35 yards and was sacked twice.

“It was fun to go out there and get some real NFL reps,” Trask said.

Gabbert noted the difference in the vibe in the stadium with most of the seats filled compared to last season, when the number of fans allowed to attend games was limited throughout the league due to the coronavirus pandemic.

“The energy was awesome,” the 11th-year pro said.

With Tropical Depression Fred weakening to a tropical wave but still threatening to bring heavy rain to Florida as it entered the eastern Gulf of Mexico, Brady was1 of 2 for 9 yards and was sacked once before departing.

The seven-time Super Bowl champion handed off to Leonard Fournette on the game’s first two plays, then connected with former Bengal and offseason free agent acquisition Giovani Bernard for 9 yards on third-and-8 to extend the opening drive.

Gabbert finished 6 of 11 for 64 yards. Griffin was 6 of 11 for 47 yards and two interceptions before being replaced by Trask.

Bengals: Ossai left with a wrist injury and did not return. Allen started in place of Burrow, while Billy Price filled in for Trey Hopkins at center, and defensive tackle Larry Ogunjobi was replaced in the starting lineup by Josh Toupo.

Buccaneers: Tampa did not report any injuries. Safety Mike Edwards started for Jordan Whitehead, who along with rookie offensive lineman Robert Hainsey and tight end Cameron Brate were among the players who sat out.

Bengals: at Washington next Friday.

Buccaneers: home vs. Tennessee next Saturday.