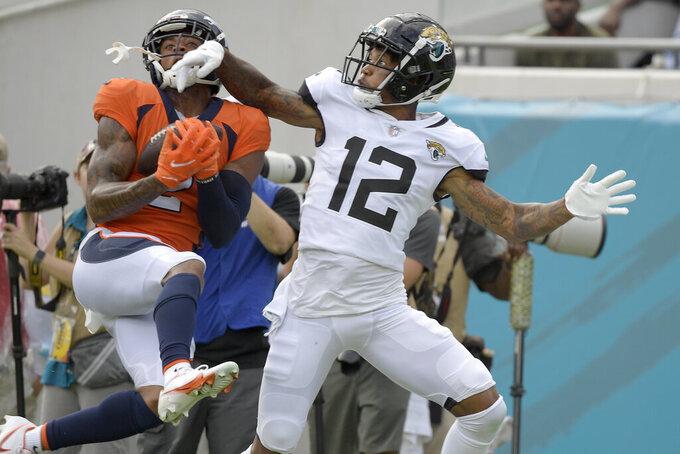 With Jerry Jeudy sidelined because of a high ankle sprain, Sutton turned in his best performance as a pro as the Broncos beat woeful Jacksonville 23-13 on Sunday and handed the Jaguars a 17th consecutive loss.

Sutton finished with nine catches for 159 yards, including a 55-yarder on the second play of the second half and a shoestring grab in the third quarter that surely rates among his best plays in four seasons.

It came a day before the one-year anniversary of a knee injury that cost him 15 games last season and one week after finishing with one reception for 14 yards at the New York Giants.

“There was a lot of hard work that went into it,” Sutton said. “I've had a lot of people in my corner just supporting me throughout that whole process. I take each play as an opportunity to go be me.”

The Broncos, 2-0 for the seventh time in their last nine seasons, waited years to see this kind of outing from Sutton. It was just the third 100-yard receiving game for the 2018 second-round draft pick.

He looked unstoppable against the Jaguars (0-2), who struggled to keep pace with him on deep routes and crossing patterns.

Sutton had nearly half of Bridgewater’s 328 yards passing. Bridgewater completed 26 of 34 throws, with TD tosses to Tim Patrick and Noah Fant, and played mistake-free football for the second straight week.

Bridgewater became the fourth player in NFL history to open a season with consecutive games in which he had two TD passes, no interceptions and completed 75% of his passes, joining Drew Brees (2018), Aaron Rodgers (2015) and Jeff George (1994).

“Man, it was great seeing Court going out there and making plays," Bridgewater said. "We just told our guys we got to win the one-on-one battles. ... He had a career day today. We talk about the sacrifices he's made to get back to this point.”

No. 1 pick Trevor Lawrence capped an 83-yard drive to open the game with a 25-yard pass to Marvin Jones. But Jacksonville managed just 106 yards the rest of the way.

It was the 19th time in franchise history — and first since the 2018 season finale — that the Jags finished with fewer than 200 yards of offense.

Lawrence completed 14 of 33 passes for 118 yards, with a touchdown and two interceptions. He now has five picks in two games.

“Making sure I keep my confidence every week is big, and I think I have that,” Lawrence said. "We’re going to get better. We’re close.

“Obviously last week and this week doesn’t look great when you look at the numbers, but I really feel like we’re close and we’ve just got to make some more plays and stick together.”

Bradley Chubb’s return from an ankle injury was short-lived. Denver’s standout linebacker left in the second quarter after aggravating the injury. Chubb looked noticeably upset as he walked off the field.

Chubb and Von Miller, one of the NFL’s most dominant pass-rushing duos, were on the field together for the first time in nearly two years. They last did that on Sept. 29, 2019, against the Jaguars.

First-round draft pick Patrick Surtain II, making his first career start in place of Denver cornerback Ronald Darby (hamstring), got his first career interception. The rookie made a great grab near the sideline in front of Tyron Johnson.

“I was pretty comfortable,” Surtain said. “I was expecting going into the game they were going to try me early. I had to make up for it.”

Jamal Agnew returned a kickoff 102 yards late in the game, but the Jaguars promptly got flagged for delay of game on the ensuing kickoff.

The score was one of the few bright spots for Jacksonville. Coach Urban Meyer has said repeatedly that he wants to have one of the league's best special teams units, and for one play, his team looked the part.

Josh Lambo’s struggles continued Sunday, raising questions whether the Jaguars will make a move at kicker. Lambo missed two field-goal attempts, making him 0 for 3 on the season.

Lambo, who had hip surgery last year, was wide right from 52 yards and wide left from 48. He was wide left on a 55-yarder last week at Houston.

“I’m not giving up on Josh Lambo,” Meyer said.

Broncos: Host the winless Jets next Sunday, ending a three-game opening stretch that’s likely the softest in the NFL.

Jaguars: Host Arizona next Sunday. The Cardinals have won the last three meetings.